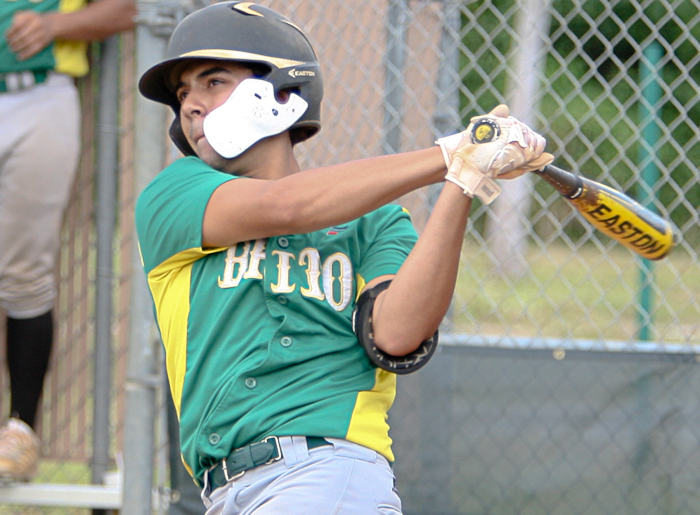 Brito’s Luis Ruiz watches his first of two home runs fly out of the ballpark on Wednesday.

The wind was blowing out at Princeton Christian School on Wednesday afternoon and the Brito Panthers took advantage, hitting four home runs in an 18-2 road win over Somerset Academy Charter.

Luis Ruiz and Elvin Granado belted two homers each and lefty starter Juan Carbonell tossed a complete game to lift the Panthers to the non-district triumph.

“We’ve been hitting, but we’ve had some tough games where we get mentally frustrated,” said Ruiz, whose Panthers snapped a two-game skid improving to 6-7 on the season. “We swing at bad curveballs. We’ve just got to be in the right head space and have patience. If we have patience and look for good pitches, this team hits. We just can’t swing at the bad ones.”

Ruiz swung at a couple of good ones on Wednesday, belting solo homers in the second and again in an eight-run sixth inning that shortened the game by the run-rule. His first homer was a line drive that just cleared the chest-high fence.

“I thought it hit the fence, it was really low,” Ruiz said. “When I saw it go out I was really happy. I had a few bad games and today was a good day to get back in rhythm.”

He lofted his second homer into the stiff breeze that was blowing out from home plate.

“Their center fielder is really fast so I thought that he would get to it,” Ruiz said. “But then I saw it go out, so that was good especially trying to tie up (Granado’s output). And the wind was a little helpful.”

Granado took advantage of it as well, mashing his first two home runs of the season. The first one came in the opening frame and set the tone. 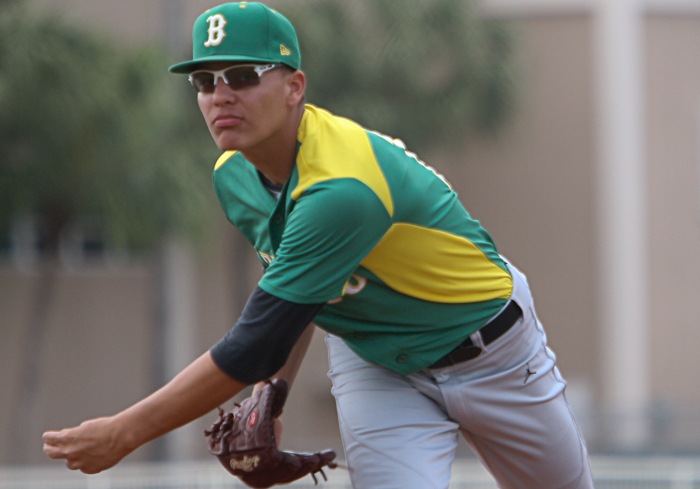 Brito pitcher Juan Carbonell threw a complete game on Wednesday to earn the win in an 18-2 triumph over Somerset Academy.

“The first one, I wasn’t really thinking about (a home run) I was just trying to hit,” said Granado, who wasn’t sure his first long ball would clear the fence. “The first one, no, the second one yeah I kind of did.”

And now that Granado has suddenly turned into a power hitter for the Panthers, is this a trend that he plans to continue?

“Kind of is, I’m trying to look for the hits more, but if that comes out, even better,” he said.

“They’ve got a good squad,” said Somerset Academy manager Peter Cerda, whose Stallions fell to 3-10 for the season. “We’re up and coming so we’ve got a lot of work to do. I purposely scheduled nothing but good teams. I purposely put our guys up against the better competition so that in the future we’ll know how to play that.”

“That pitcher was really good. We didn’t match the pitching. That’s what it came down to. He’s a tough pitcher, good lefty.” 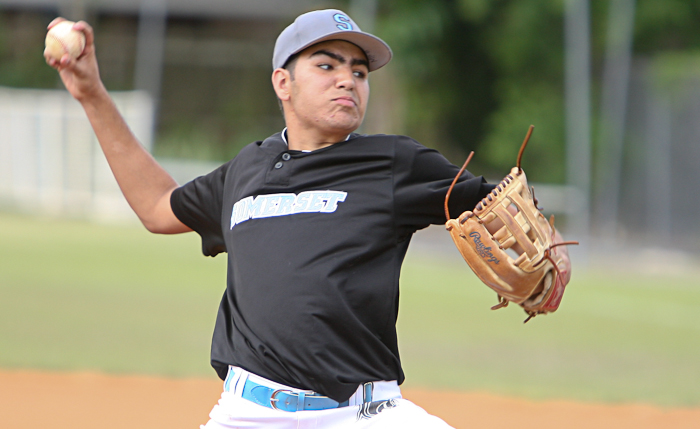 Carbonell struck out eight in going the distance.

“I started off a little too relaxed and then as the game went on I realized I had to pick it up so I used a lot more breaking balls,” Carbonell said through an interpreter. “At the end of the day I did what was needed to be done.”

His team put him in a rocking chair from the outset and Carbonell was able to cruise.

“Definitely, it was easier,” he said of the tremendous run support. “At first I had a little pressure. I wanted to make sure I got my pitches over. Then I relaxed a little bit understanding that my team’s got my back.”

It’s a close play at second base with Somerset Academy’s Max Colina applying the tag. Colina would later homer for the Stallions.

Somerset Academy’s Max Colina also hit a home run, a sixth-inning solo blast. The sophomore scored both of the Stallions’ runs, coming home in the fourth inning on a single by Anthony Stinson.

Colina had two of the Stallions’ eight hits.

“I think both teams swung the bat pretty well,” said Brito manager Laz Fundora. “(Somerset Academy) really hit the ball. (Carbonell) is really good and they made solid contact all the way through.”