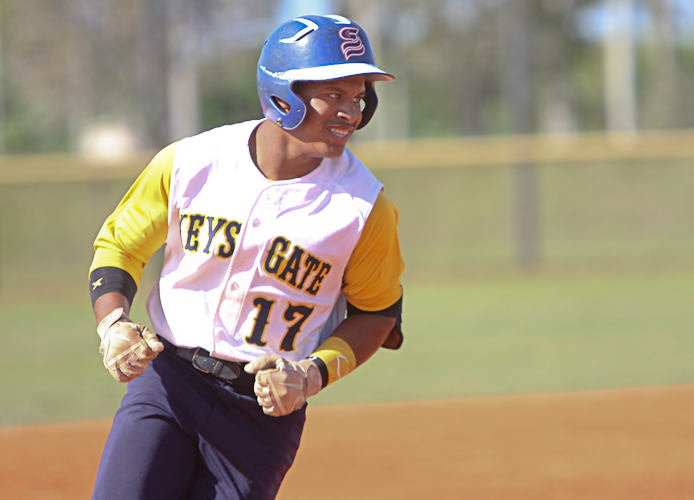 Keys Gate blew a four-run lead in the top of the seventh inning, then came back in the bottom half to earn a walk-off 9-8 victory over visiting St. Brendan on Friday afternoon in a non-district game at Homestead.

Frank Fernandez opened the bottom of the seventh with a single and Juan Arcena followed with a single before Jesen Montanez laid down a bunt that was misplayed for one of five St. Brendan errors, allowing the winning run to score.

The win lifts the Knights, who also committed five errors, to 5-9 for the season.

“We haven’t put it together this season,” said Keys Gate Charter manager Rich Benavides. “We’ve got a talented bunch of kids. We’ve been hitting the ball well for the last two weeks, we just haven’t been on the winning end.

“But we lost our starting catcher and we lost our starting left fielder, so the guys found something besides themselves to play for. It really hit home, they got a reality check that you never know when your last baseball game is going to be. So they’ve been playing motivated ball and it was nice to see them get a win.”

St. Brendan broke through for four runs on six hits in the top of the seventh inning to erase an 8-4 deficit. Christian Centeno, Gabriel Diaz, and Sebastian Garrido drove in runs for the Sabres in their dramatic late rally.

“It’s been a long season for them, a season of change, a season of transition but they’ve battled. I’m very proud of them. Keys Gate took advantage of when we messed up and they pounced on it. We just ran out of gas there at the end.” 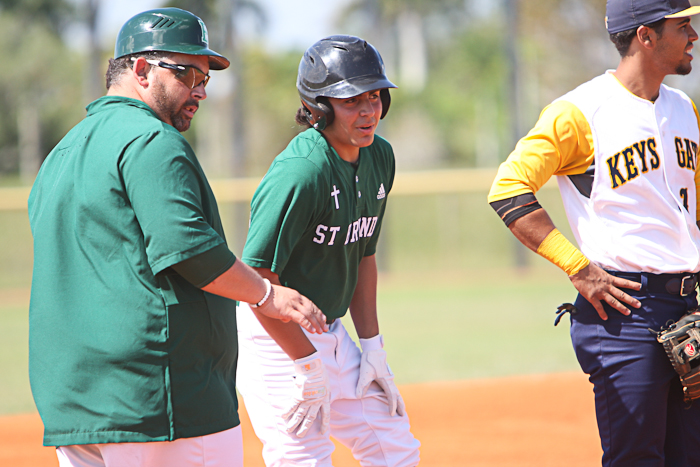 Garrido collected three of the Sabres’ 14 hits and drove in two runs.

“I had a good approach at the plate, looking middle/in on every pitch from the first pitch and then working my way through and stayed through the baseball up the middle,” said Garrido, who likes the fight in his team. “We stayed fighting the whole game and we just didn’t come through at the end, but it happens.”

Arcena highlighted the Knights’ nine-hit attack with a third-inning solo home run that increased the lead to 6-3.

“There was no pressure, I just wanted to keep the ball in play to get on base with two strikes,” Arcena said. “All I was thinking about was putting the ball in play and whatever comes out, comes out. I wasn’t expecting (to hit a home run), said Arcena, contributed to the game-winning rally in the bottom of the seventh after his team saw its lead slip away in the top half.

“I never put my head down,” Arcena said. “If I messed up I make it up. It doesn’t matter how. I’ve never let my team down so far.”