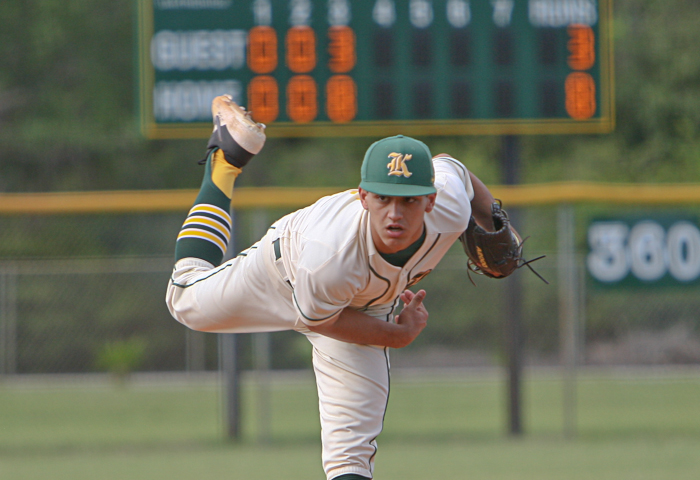 Killian reliever Evan Demurias closed out the final two innings of the win.

Senior Day at Killian was special on Thursday. Down 3-0, the Cougars rallied for a 14-5 non-district victory over visiting Gulliver Prep. Killian, No. 3 in the Miami Dade Power Rankings, scored eight runs in the third inning then scored in every inning after that to run past the Raiders.

“It’s been a real emotional day today,” said Killian manager Hernan Adames. “My seniors, it’s their last game at home. We have the playoffs but it means a lot to all of us (to win this game). These kids throughout the year, starting last year, they were young. As a coach, in all the years I’ve been coaching, I’ve never had the privilege and honor to coach a group of guys that do whatever it takes day in and day out in practice.

“This is truly, when they say family – and I’ve been around a lot in this game – this is truly a family. We spoke at 12:30 today. I brought the seniors out to the locker room. And I spoke from the coach’s heart. Individually I told them exactly what they’d done since they’ve been under my tutelage the last two years. And the outcome is what you saw; down 3-0, two outs bottom of the third, (we score eight runs). That shows you the type of character that they have. Regardless of the situation in the game, they know they can score.”

Two-out rallies have been something Adames said he has focused on this season.

“One of the things we really went after this year was when there’s two outs I want nobody with gloves on,” he said. “Pull for each other and we can do this. There have been multiple occasions this year, down in the score or no score in the game, with two outs we have put up two, three, four runs at a time. And you saw that today.” 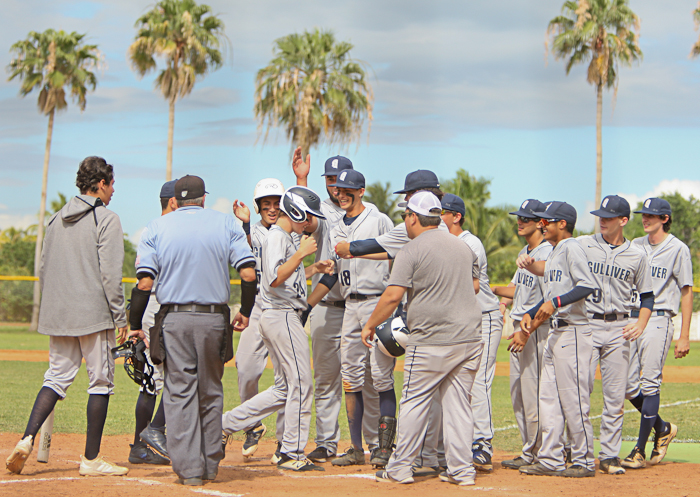 Gulliver’s William Bettridge is greeted at home plate after his two-run homer on Thursday.

Gulliver broke a scoreless tie in the top of the third inning with three runs. Two of those came on a towering home run off the bat of William Bettridge, who turned on a hanging breaking pitch.

But the Cougars, now 16-5 this season, answered with a two-out, eight-run rally to take the lead for good.

“We’re a really young team and that’s been our biggest issue this year, that one big inning that we give up,” said Gulliver Manager Manny Crespo Jr, whose Raiders slipped to 3-11. “We kind of let the momentum shift in their favor. It’s tough for these guys to regain their composure but that’s part of being young. They’re gaining the experience that we’re going to need for us to compete in the future. I’m excited about that. I think through the tough times they’re going to develop that tough skin you need to play this game.”

The Cougars batted around with Matthew Ojeda collecting two singles in the frame, driving in a run and scoring another. Senior Jorge Corona, who is headed to Louisiana Tech to play baseball next year, also delivered an RBI single.

“We knew we had to pick it up,” Corona said. “We got it going with two outs, two-out rally and scored eight that inning and right from there we took off,” said Corona, who is now focused on the last remaining games of the regular season and then the playoffs. “We have three big games coming up that should be tough, that will get us ready for the playoffs. That’s what we’re looking forward to. (District playoffs) are going to be here on our home pretty much. We can’t wait.”

Senior Richard Rodriguez delivered a clutch three-run double in the inning after a two-run double by Romeo Sanabria, who later scored.

“Senior leadership is amazing, pitching staff is growing as we speak on a daily basis,” Adames said. “We were young on the mound with no experience. But now, as a coach, I’m really happy with what they’ve become as a team right now.” 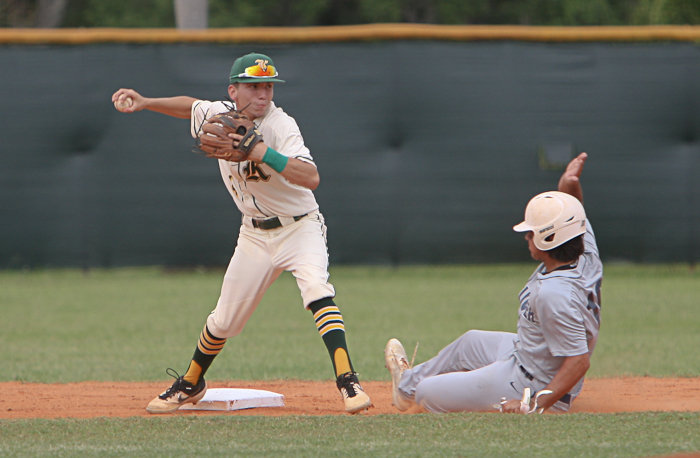 Killian turns a double play early in its 14-5 win over Gulliver on Senior Day.

Twelve different players scored and/or drove in runs for Killian. Fabian Dennes lined a two-run single in the fifth inning, part of his 3-RBI, 2-runs scored afternoon. Senior David Pereira, who is headed to Carson-Newman next year to continue his baseball career, had two hits, drove in two runs and scored another to make it a special day in his final regular season home game.

“Senior Day was amazing,” Pereira said. “It was a chance for us to show as a team how close we are together and how the seniors have created a bond together. It’s more of a family than a team in retrospect when you look at it from outside the team. We got our bats going today. Just looking to continue it tomorrow and the next day.”