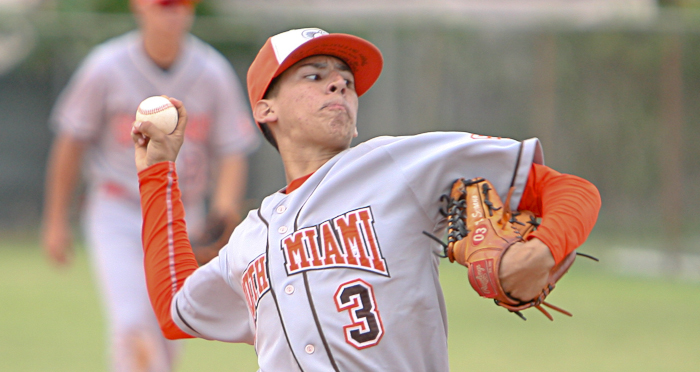 South Miami scored three runs in the seventh to turn back Sunset, 10-7, in the regular season finale for both teams on Friday afternoon at Raul Ibanez Field.

The non-district encounter went to the final inning tied, 7-7, after Sunset rallied from deficits of 5-1 and 7-3.

But South Miami, which closes the regular season at 12-10, would not be denied.

“It’s a big win for us,” said South Miami manager Howard Cuervo. “Even though its the last game of the regular season, it’s huge for us. We get on top of the score, then they tie it, and we come back to win the game. That’s pretty good to get us ready for the playoffs.”

The Cobras finally shook off their hosts with a three-run seventh. Michel Cabo scored what proved to be the winning run. He walked and then came home on a double by Rene Pence.

With a stiff breeze blowing in, Cabo played small-ball to lead the Cobras to their second consecutive win to end the regular season. Cabo walked twice, laid down a pair of bunt singles, scored twice and drove in a run.

“Every time I went up to bat, my goal was to get on base and try to make runs every time,” said Cabo, whose first bunt attempt was to move a runner into scoring position. “One was for a sacrifice and it got into a hit, and the other, it was for a hit. They were playing a little back (on the infield).”

His approach at the plate in the seventh inning was no different.

“My goal was the same, to get on base and get my team back up again and try to win the ball game,” said Cabo, who did just that and gave the Cobras some momentum heading into the playoffs. “It’s good momentum, we’re all together and try to win every inning and do the best we can always.” 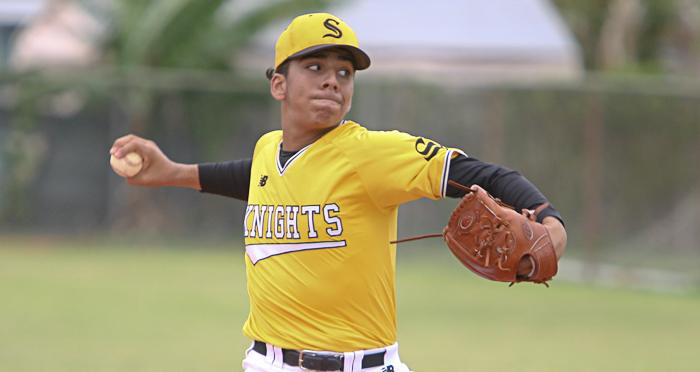 Sunset’s Louis Rodriguez sparked two-run rallies in each of the fifth and sixth innings to tie the game. He ripped an RBI double in the fifth inning, one of his two hits in the game, and then scored before walking and scoring again in the sixth.

“My bats were pretty simple,” Rodriguez said. “I’m looking for fastballs in the zone where I can drive it. They’re not going to throw it there, I’m just going to take it until they give it to me,” said Rodriguez, who also remained flexible at the plate. “I don’t expect offspeed, I’m waiting fastball. But if they throw me offspeed I’m going to be on it.

“I have a lot of confidence when I go hit and I play for my team. We just try to make all the runs we can.”

The scrappy Knights finish the regular season at 7-17.

“Season hasn’t been so good for us,” said Rodriguez. “But we’re going to keep fighting. It only takes one game. Like I tell my team every day, ‘it’s only one game that we have to win, it’s the playoff game.’ The season is just preparing us for that one game. No matter what, it could be our year, the year of the underdog.”

The Knights open the postseason at Doral with a tentative date of May 7.

“We fought throughout the game (today),” Sunset manager Joseph Marcos said. “They had a big lead on us, we came back and tied the game. South Miami is a very well-coached team. So props to them.

“We’re going to have our No. 1 (pitcher for the postseason opener) and see what we can do against another excellent-coached team. Their record stands for itself,” Marcos said of 7A-16 top-seed Doral, which started the week ranked No. 7 in the Miami-Dade Power Rankings.

The game was close as were many plays in the game on Friday.

Khaya Wright delivered two hits and drove in a run for the Cobras, which got doubles from Kevin Serrano and Yassel Pino, who also picked up the win on the mound with an inning in relief of Serrano, who worked the first four innings. Pino, the fourth Cobras pitcher, struck out two.