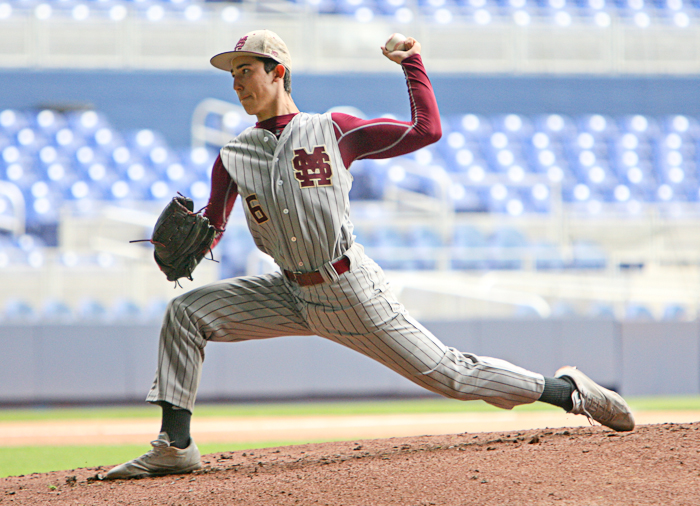 In a game that was as good as the venue that hosted it, Miami Springs held off Hialeah Educational, 3-1, on Wednesday morning at Marlins Park.

The roof was open to a cloudy start of the day, but that certainly didn’t dampen the spirits of the two non-district foes who gained the experience of a lifetime playing at the Major League ballpark.

Freshman first baseman Jason Torres hit a home run, one of his two hits, and scored twice to provide enough offense for a trio of Golden Hawks pitchers who combined on a one-hitter as Miami Springs remained undefeated at 13-0 for the season.

Lefty starter Erick Argote worked the first four innings, striking out five, and the Hawks got three innings of no-hit relief from Jesus Gonzalez and Brandon Villabrille. Gonzalez struck out two in two innings of relief to pick up the win, and Villabrille finished it out with a perfect seventh inning, striking out a pair of Bulldogs.

Argot said he was able to lock in and make pitches that were called for by his catcher Nicholas Fuentes, whose two-out, two-run sixth-inning double made the difference in the game. Still, there’s just no way to escape the butterflies of playing in a Major League ballpark.

“You definitely feel it,” Argote said. “Even throwing in the bullpen, warming up, the way the (catchers) mitt pops. The adrenaline gives you a few extra miles and hour. It’s unreal, my heart’s been pounding since the minute I set foot in here. But you’ve got to step back, take a deep breath, and know you came here for business.”

Argot said he sings to himself when he gets nervous. What song was he serenading himself with?

“I was singing a song by Lil Uzi,” said Argote, who had outstanding command of his slider. “My slider was really my best pitch. I was throwing it for first-pitch strikes, as a strikeout pitch, and it complemented my fastball. Even though I only throw 82-83 (mph) it gives my fastball extra juice.”

But his best memory wasn’t his pitching performance.

“Definitely the bomb to left field (by Torres),” he said. “Just seeing that from a Major Leaguer’s point of view, it’s beautiful.”

Torres’ second homer of the season came in the second inning, a no-doubter into the Hawks’ bullpen beyond the left field fence.

“Best feeling I’ve ever had,” Torres said. “I look for these moments. I feel like I’m a Big Leaguer, turn on a pitch and hit it about 350 (feet), best moment ever,” said Torres, who believed it was gone from the moment it left his bat. 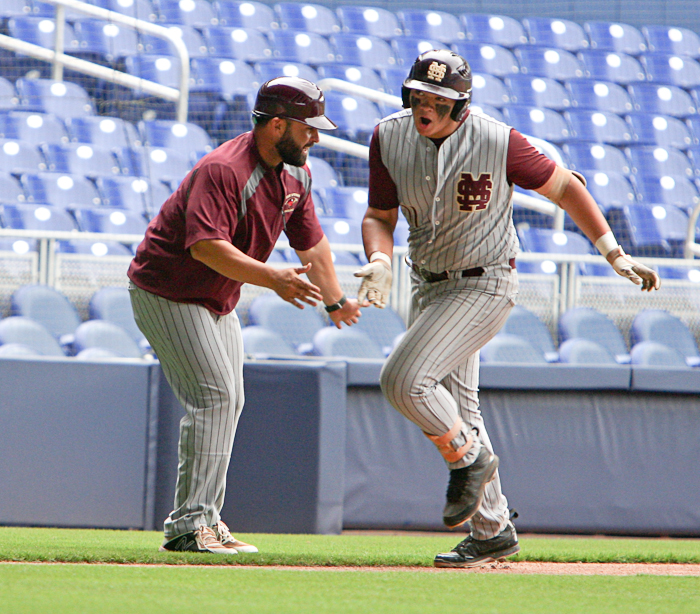 The solo blast gave the Hawks a 1-0 lead and allowed Torres and the team to exhale from the emotions that were running high.

“He hit the home run and kind of lifted a weight off of our shoulders,” said Miami Springs manager David Fanshawe.

But the Bulldogs were able to tie it 1-1 in the fourth inning when Carlos Castillo made the team’s lone hit count. The Hialeah Educational Academy shortstop singled, stole second, moved to third on a ground out, and then scored on a balk to highlight his team’s experience at the Major League park.

“Getting these guys out here, the experience is amazing,” said Hialeah Educational Academy manager Willy Baez. “You have both teams coming out with great fans from the school. You try to bus them over and have the students enjoy it also with them.”

Baez said he felt it was an all around great experience.

“The experience is not only with the baseball players but with the school,” he said. “Good support staff from our principal, our assistant principal that came out here and supported us today.

“We didn’t get the victory but at the end of the day the experience and learning from here to when we get to district is what counts. These are games that you’re going to learn from and get better to get through district.” 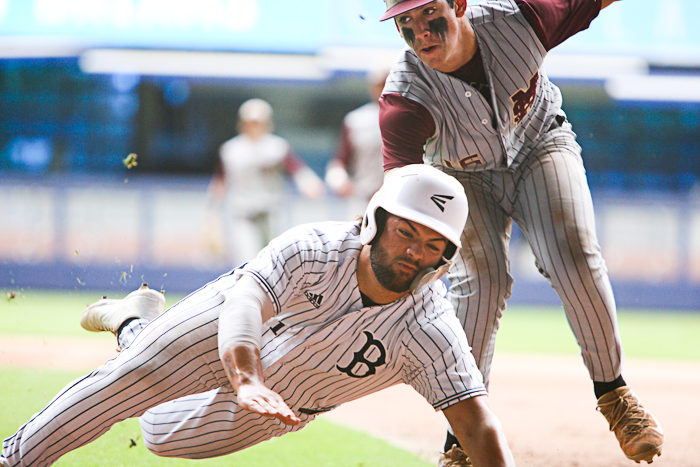 The action was fast and furious at Marlins Park on Wednesday morning in Miami Springs’ 3-1 win over Hialeah Educational Academy.

The game wasn’t decided until Fuentes’ clutch hit, a long fly ball to left field on the first pitch he saw in the at-bat.

“That’s basically my approach, hit first-pitch fastball, don’t let it go by,” Fuentes said. “I jumped in the box thinking that nobody could beat me, I’m going to be out there swinging.”

It truly was a memorable experience for all.