Coral Reef starting pitcher Samuel Cheng delivers in the early innings on Monday of a game that was concluded on Tuesday with the Barracudas prevailing 5-0.

Coral Reef’s Shawn Perez belted a three-run home run and Peter Larzabal and Samuel Cheng combined on a 5-0 shutout of top-seed Southridge, in a 9A-16 semifinal playoff game at Killian High on Tuesday afternoon.

The upset victory propels the No. 4 seed Barracudas into the district championship game against tournament hosts Killian, 2-0 winners over Palmetto in its semifinal game. Coral Reef (14-10) and Killian (18-6) square off at 3:30 p.m. Thursday.

The game began early Monday afternoon as to avoid the oncoming thunderstorms, but the two teams could not run through the innings fast enough before the lightning, wind and rain blew in and halted action about an hour into the game, after the teams had played just three innings.

Coral Reef led 2-0 at the time the game was postponed for completion on Tuesday afternoon. The Barracudas jumped on top in the first inning, scoring a pair of runs. Sebastian Jimenez and Brent Cosculluela opened the game with walks. Both scored after a bunt single by Michael Ogden, a wild pitch, and an error. 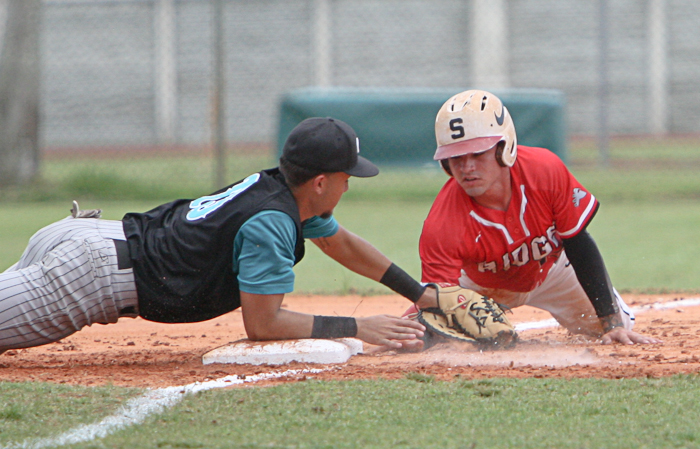 It was a close play at first base in a close game between Coral Reef and Southridge.

It stayed that way until the seventh inning when Perez punctuated the victory with his dramatic home run.

Cheng started the game and went three innings on Monday, allowing just two hits while striking out two. Larzabal took the mound when the teams resumed play on Tuesday and worked the final four innings, striking out four, to earn the win.

Larzabal yielded just three hits and worked out of a bases-loaded jam in the sixth.

Ronaldo Gallo started for Southridge (17-7) and worked three innings, before Brandon Cabrera pitched the final four frames for the Spartans.