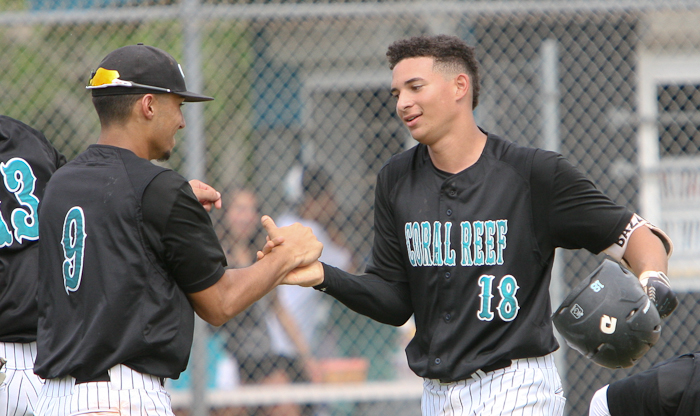 Coral Reef’s Sebastian Jimenez is congratulated after his third-inning homer tied the game. He later doubled to score another run in the Barracudas’ 6-4 win over Braddock.

Sebastian Jimenez could sense that something big was about to happen for him and his Coral Reef team in Wednesday’s 9A region quarterfinals playoff game at home. The Barracudas’ catcher homered, doubled and drove in two runs to help Coral Reef advance to the region semfinals with a 6-4 win over Braddock.

Jimenez blasted a solo home run in the third inning to tie the game at 1-1, then broke that tie an inning later by highlighting a five-run fourth inning with a run-producing double.

“I was just feeling good the entire day, hitting in the cages, I just felt good all around,” said Jimenez, who lofted a towering home run to left field. “The pitcher left one high inside, I just turned on it and I knew off the bat that it was gone. I was looking for my pitch and I saw it and I just executed what I wanted to do,” said Jimenez, who took the same approach an inning later. “It was the same thing, I was going up there confident and got a piece.”

In a battle of No. 4 seeds from their respective districts, it was Coral Reef that ultimately kept its season alive.

“I’m proud of my players,” said Coral Reef manager Chris Leon. “These Coral Reef baseball players are the standard. Every college is looking for student/athletes like my kids. They are 3.0 students, if not higher, and now they’re excelling not just in the classroom but they’re excelling on the field.”

Manny Duran delivered a run-scoring single in the pivotal fourth inning then later scored on the back end of a double steal. Thomas Acevedo also came through in the inning with a RBI double and scored a run. Dylan Boyd, who had two hits, and Shawn Perez, who collected three of the Barracudas’ 10 hits, both singled and scored in the frame. Michael Ogden joined the merry-go-round with a walk and a run scored. 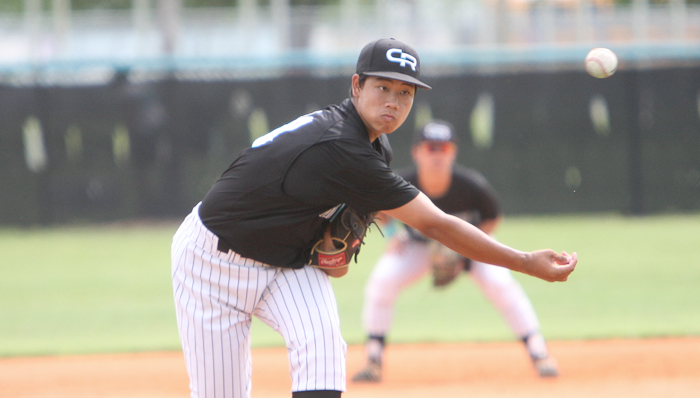 Coral Reef starting pitcher Samuel Cheng struck out five in 6 2/3 innings of work on Wednesday to pick up the win.

It was more than enough cushion for Coral Reef starter Samuel Cheng to work with. The junior right-hander struck out five over 6 2/3 innings of work to pick up the win. But he praised the other eight players around him for his success.

“I’m more of a contact pitcher,” Cheng said. “I just let my defense take care of me. I believe in my teammates and I trust my teammates to do what they’re supposed to do. And I love my catcher. He calls all the pitches for me and I just do what I do.”

Cheng came within an out of pitching a complete game. But with the bases loaded and a 6-2 lead, he gave way to reliever Pat Roth, who closed it out and recorded a save.

“I was a little disappointed,” Cheng said of being lifted, “but my teammate picked me up. I needed it.”

But Braddock, which held an early 1-0 lead in the third inning when Gonzalo Garcia doubled and scored on a sacrifice fly by Joel Franco, didn’t go down without a fight. 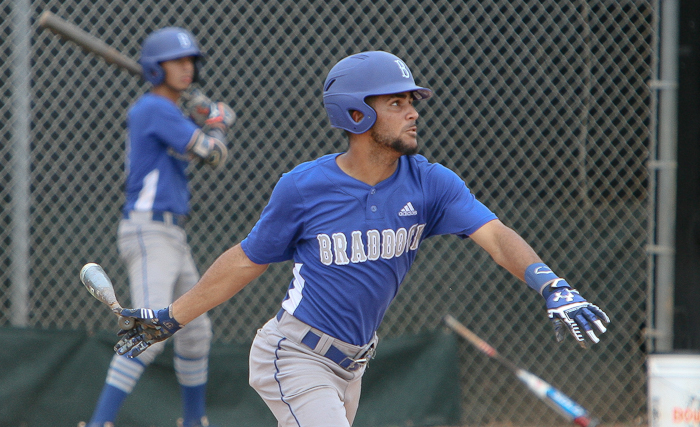 Braddock took its swings as well, scoring three times in the seventh inning on Wednesday.

Trailing 6-1, Mel Rubiera delivered a clutch two-run single in a three-run seventh-inning rally that fell just short. That came after Franco was hit by a pitch with the bases loaded. Christian Cardet and Chris Orduna scored runs for the Bulldogs in the inning as did courtesy runner Pedro Castillo, who took first base for Ismark Gonzalez after he was also hit by a pitch.

“That was our message in the dugout, once that inning got away from us a little bit, at this point we’ve got nothing else to do but fight and make them earn that victory to the end,” said Braddock manager Wesley Morejon. “We give our kids credit for sticking with it to the end.

“We had some high peaks, some deep valleys, and some average stuff in between,” Morejon said of an 11-13 season in which the Bulldogs lost six games by one run, four of those to ranked teams, and two more losses by two runs, including Wednesday’s result.

“It was one of those seasons and then we made some decisions come playoffs to just stick with the guys that really gave us their all and committed to everything. And we went to war with those guys. I’m a firm believer that’s why we advanced in the playoffs. And most of that group comes back next year, so we’re excited (about the future).”

For 9A-16 champions Coral Reef, winners of four straight and nine of its last 11 – among those an 18-5 victory over Braddock on May 1 – the dream season continues.

“This is by far the best team we’ve had in Coral Reef history,” Jimenez said. “Midseason we got a little shaky but we brought it up as a team and we spoke about what we wanted to do and how we can make history in this school.” 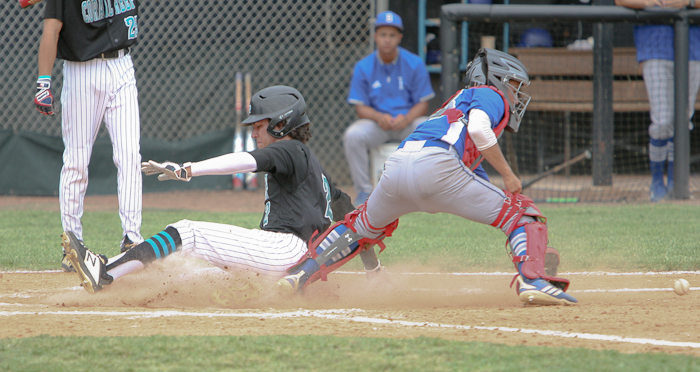 What made the difference in the big turnaround?

“Our mentality,” Jimenez said. “Coaches were telling us that this is the best team in Coral Reef history and that we can go far. We weren’t really believing it because throughout the regular season it wasn’t what we wanted, not what we were expecting. But then we came out, we beat Southridge 5-0, then we came out and won the district championship.

“I believe after we walked it off (8-7 over Killian) in the district championship we knew that we could actually do this.”