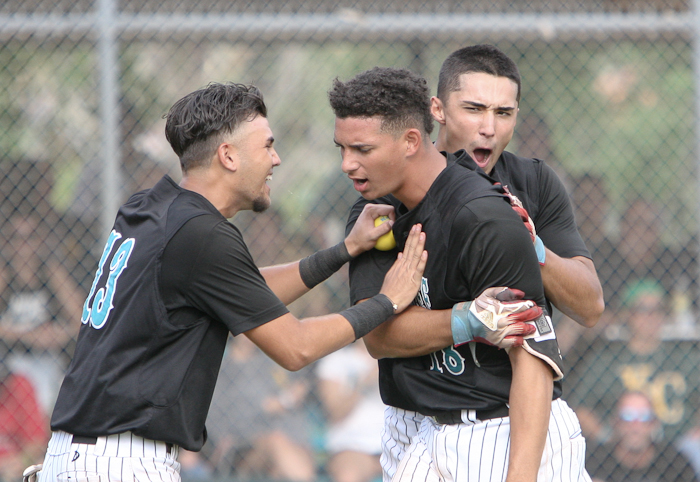 Coral Reef’s Sebastian Jimenez is congratulated after his game-tying home run in the sixth inning.

Coral Reef has had Killian’s number all season long. That did not change on Saturday, when the two 9A-16 foes went toe-to-toe again in a regional semifinal game. The unranked Barracudas defeated the No. 10 Cougars for a fourth consecutive time this season, holding off a late rally for a 5-2 win at home.

Coral Reef (17-10) will host Coral Park at 4 P.M. Wednesday in a 9A regional final game. The winner earns a berth in the state tournament.

Saturday’s two opponents last played on May 9th for the 9A-16 championship, when Coral Reef walked off with an 8-7 win. The Barracudas won the two previous meetings with Killian during the regular season by scores of 10-4 and 13-12.

It was a four-run sixth inning that made the difference on Saturday, extending the Barracudas’ win streak to five games. Coral Reef catcher Sebastian Jimenez sparked the rally with a towering home run to left field that tied the game 2-2.

“The funny thing is I was 0-for-2 and my coach kept telling me, ‘It’s not how you start, it’s how you finish.’ Right before the inning I told him that I was due,” said Jimenez, who credited teammate Brent Cosculluela for tipping him off that he was being fed fastball first and then offspeed. “So they threw me the fastball and I just missed it. So I knew in my head they weren’t giving me another fastball. So I sat on an offspeed, he left a hanging curve and I just did what I’ve always been doing. Brent is the one who got it in my head to sit on that curveball after the fastball. If it wasn’t for him, I don’t think I would have done it.”

Cosculluela let his bat do some talking as well, with a run-scoring single in the third inning that tied the game at a run each.

But his advice led to Jimenez’s key homer that set in motion the game-changing sixth inning. Manny Duran broke the tie with a two-run single, scoring Michael Ogden and Shawn Perez, who had two of Coral Reef’s six hits.

“I was just trying to stay focused and pick up my teammates,” said Duran, who also collected two hits in the game. “I just get the job done for my team. It was a great feeling. I was looking middle-away. He came in, I turned on it. He didn’t have enough velocity to get it by me, so I was able to turn on it.” 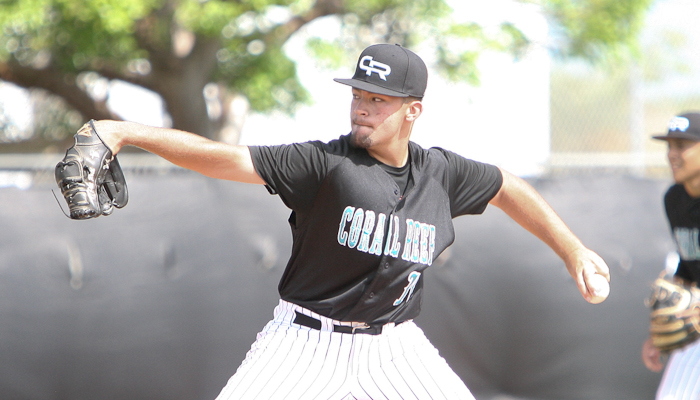 Coral Reef’s Pat Roth went 6 1/3 innings to pick up the win on Saturday.

In doing so, Duran turned the game around. Ryan Scarry was able to score as well on the play, when the ball bounced away in the outfield and Coral Reef turned a one-run deficit into a three-run lead.

But victory was not secured until Ogden, Coral Reef’s third pitcher of the afternoon, was called upon to record the final out and a save, leaving the bases loaded.

“I’m proud of my kids,” said Coral Reef manager Chris Leon. “They’ve been grinding for three years for this moment. Big players come up in big moments. Sebastian Jimenez was clutch. Manny Duran was clutch. I’m very proud of my coaching staff; Eric Martinez, Michael Bravo and Danny Pino, for grinding with me.”

Starting pitcher Pat Roth was clutch for six-and-a-third innings. The left-hander struck out three and didn’t allow a hit after the fourth inning.

“I went down a couple weeks ago, had to take a couple days off, back and forth with arm struggles and stuff,” Roth said. “Working back up, just feeling my pitches, I just relied on my pitches all the way through.”

Roth remains optimistic about a continued run through the playoffs. 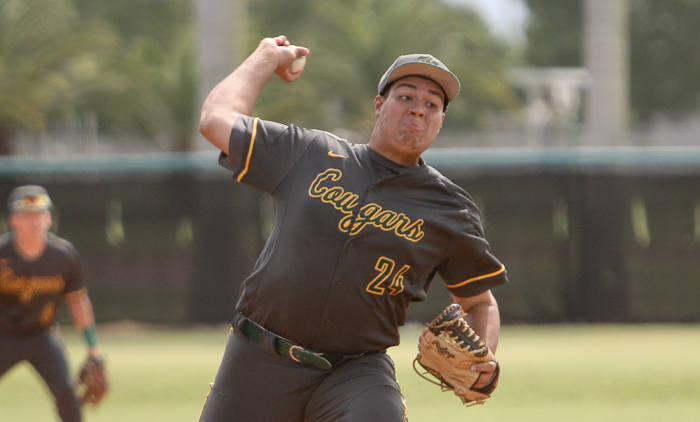 “I think we’ve got a really good chance,” he said. “It’s going to be a grind and it’s been a grind. I think we’re going to do it. We’re going to take care of business on Wednesday and see what we can do up there (at state).”

Killian finishes its season with a 19-8 mark.

“This team has played hard throughout the year,” said Killian manager Hernan Adames. “Credit to Coral Reef, they had our number throughout the year. That’s the type of team that will contend all the way through the state because they never give up. Today they had a better ball club. We’re going to be sore, we’re going to hurt. Our seniors are all hurting. But this is something that they helped put Killian in a place of respect. When you win 19 games you’re doing something well. This team was amazing.”

The Cougars took a 1-0 lead in the third inning on a Jorge Corona home run. They led 2-1 in the fourth when Ernesto Medina singled, stole second and scored on a single by Adrian Tapanes.