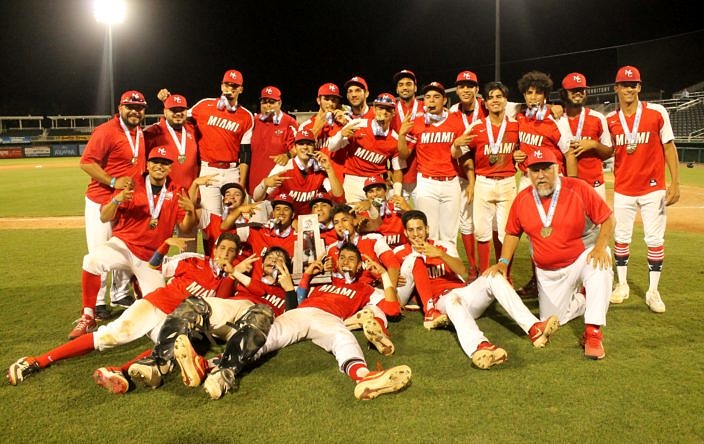 Defending its 2A state championship was no small task for the Miami Christian Victors, but Thursday night they completed that mission by holding off a feisty Seacrest Country Day team for a 3-1 victory in the 2A title game at Hammond Stadium in Fort Myers. Sophomore phenom Alejandro Rosario continued to be a force on the mound to lead the team to victory, and the offense got all of its runs in support of their ace in the bottom of the first inning.

Miami Christian becomes the 29th Florida state champion to ever repeat, and it joins elite company as the seventh Miami-Dade team to accomplish the feat to join with Hialeah, Westminster Christian, Monsignor Pace, Miami Brito, Hialeah Miami-Lakes and Florida Christian. It is also the Victors’ third state title in program history, after they took home their first championship in the 1975 season.

Reaching the mountaintop again was even more satisfying this year, after Miami Christian held off two worthy opponents in the Stingrays and also their semifinal opponent, the Real Life Christian Raptors.

“Everything was on pins and needles in both games right down to the wire,” Miami Christian manager Chris Cuadra said. “We had our bullpen stirring in the last inning, and we trust our guys. But we were able to pull it off with a double play at the end. It started seven years ago and every year we started getting better and better, and now it’s a program already and they know what to do and what to expect. I expect every year to be here. It can’t get any better than this feeling.”

Featuring a fastball sitting around 96 miles per hour, Rosario was poised and in control to lead the charge. The right-hander allowed one unearned run on two hits and two walks in six full innings, and he struck out eight. Even with full command on the mound, Rosario admitted it was no small task to keep the Stingrays at bay.

“They were a fighting team and they never gave up,” Rosario said. “We scored three early but they kept on fighting every time we came out here. I thought it wasn’t going to get more emotional, but it did. It got tougher. There are not many words that you can put into it, besides that it was emotional and it was tough and this team here is really my family.” 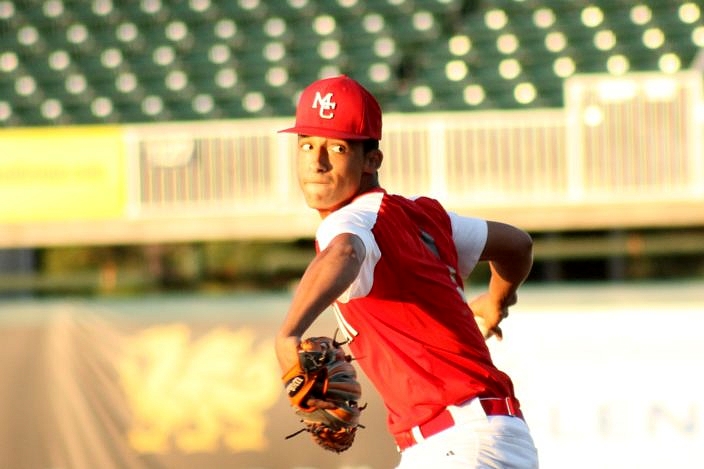 Alejandro Rosario struck out eight and allowed one unearned run on two hits and two walks in six full innings for the win.

Miami Christian went right to work with its bats in the bottom of the first to stake Rosario with the lead. Jose Izarra lined a lead-off single to center and Christian Muniz followed with a flare past the diving third baseman. Adrian Rodriguez then sent a grounder up the middle that the defense fielded and erased the runner at second, but a wild throw to first on the double-play attempt allowed Izarra to score. Justin Dearmas drew a walk to keep it going and Gabriel Vasquez crushed a shot deep to the left-center field gap for a triple that plated both base runners for a 3-0 advantage.

Seacrest got something going for the first time in the top of the third. Kyle Kruk lined a single to left to start the frame, and eventually swiped second base. Rosario got two batters out swinging, but then issued a walk to Matt Riley that brought the tying run to the plate. Rosario got the final batter to also swing and miss to strikeout the side and keep the Stingrays off the scoreboard.

An error to begin the top of the fifth opened the door for Seacrest again, as Dwight Zafra reached safely to first base for a lead-off base runner. The Victors immediately responded by turning a double play, as Marcos Alvero snared a hard liner to third from Kruk and relayed to first to double off the runner. Rosario then shut the door by picking up his fifth strikeout of the night.

The Stingrays finally broke through in the sixth. Jordan Martinez reached on an infield error and Matt Riley walked on four pitches for only Rosario’s second walk of the night. A throwing error then allowed Martinez to round third and put Seacrest on the scoreboard.

Once again Miami Christian tightened up to keep the Stingrays at bay. Rosario recorded back-to-back strikeouts and then snared a shot back to him for the third putout of the inning. 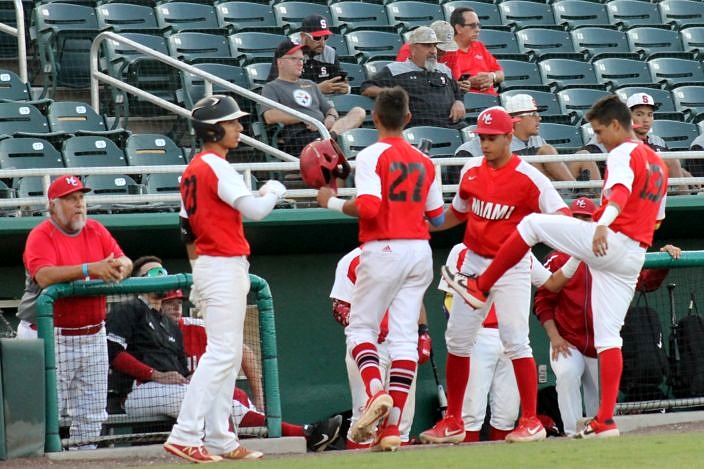 The Victors playfully celebrate with Jose Izarra after he scored the first run in the bottom of the first inning.

Down to the final three outs, Seacrest continued to battle. The Victors went to the bullpen for closer Jason Garcia, but he struggled to fill up the zone and issued walks to Zafra and Kruk to put the winning run at the plate with no outs. Garcia dug in and got the next batter swinging, and then his defense turned a 4-6-3 double play that closed out the game.

Although the end result was not the desired one, what Seacrest Country Day showed over the season and especially in these final two game at the state tournament is a strong indication that a state title could be achieved someday in the near future. Young players typically on JV rosters were routinely making big plays on the biggest stage to show they are fearless.

“I am just happy with all of them and proud of them. The effort was fantastic,” Marsala said. “They work their tails off in the classroom and that translates out onto the field. They are so coachable that it makes it easy. You can tell them things once or twice and you don’t have to come back to it. So I’m really blessed with these kids; it’s a great school and a great community. As long as get to work here in the next couple of days to start working for next season, we’ll get there. We hope to get back here. You never know how it goes, but that’s our plan is to get back here as soon as possible.” 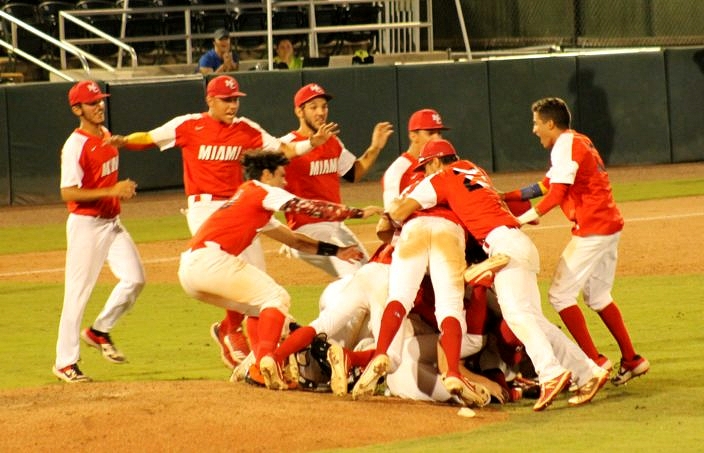 The Victors dogpile in celebration after turning a double play to end the game.