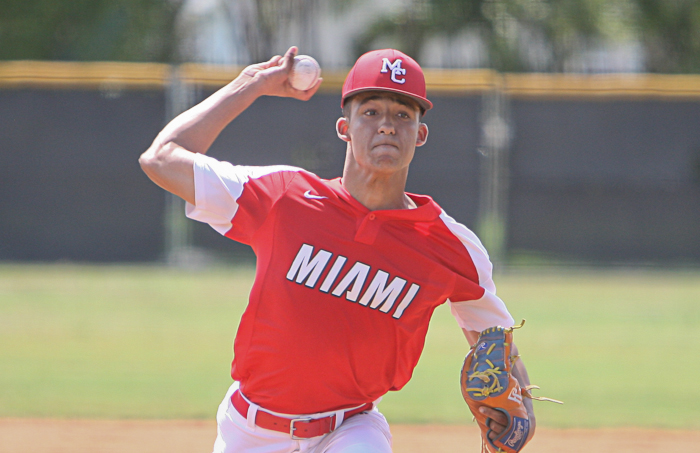 Miami Christian starter Alejandro Rosario was practically unhittable in the Victors’ 5-0 win at home over Champagnat for the 2A-8 championship on Thursday afternoon. The sophomore right-hander fired a fastball that was consistently clocked at 98 mph as scouts looked on. Rosario struck out eight and didn’t walk a batter in tossing a three-hit, complete-game shutout.

The defending 2A state champion Victors, the No. 13 team in the Miami-Dade Power Rankings, improved to 16-8 for the season heading into regionals next week. As district runners-up, Champagnat (9-13) also advances to regionals as well.

Rosario allowed just three players to reach base, all on singles, none of whom made it past first base.

“I started off very good,” Rosario said. “(Champagnat) is a very good, fighting team. I was hitting my spots today and I felt good. My team backed me up with a few runs and defense. Couldn’t have asked for any better.”

The Victors have now completed two of three goals they set for the 2019 season, according to Miami Christian manager Chris Cuadra.

“One was to get the first seed, two was to win the district, and three is to get through regionals and go back to Fort Myers again (for the state tournament),” Cuadra said. 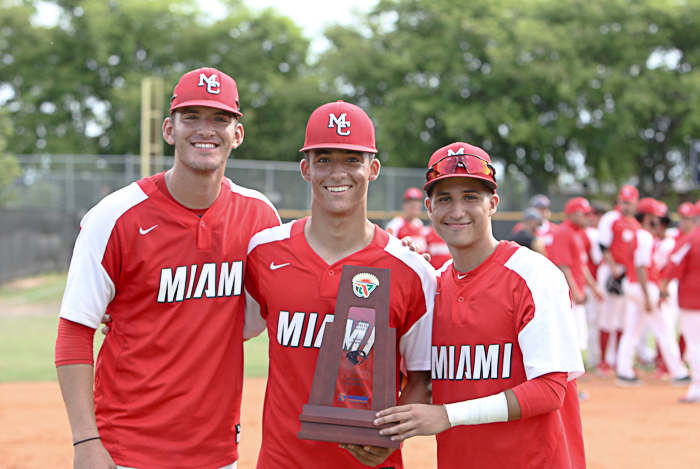 Miami Christian won the 2A-8 championship on its home field Thursday.

Juan Guerra delivered the big blow in a four-run second inning that gave Rosario a 4-0 cushion to work with. Guerra drilled a two-run double, scoring Arnold Ruiz and Marcos Pedraza with the game’s first runs. It was one of Guerra’s two hits in the game.

“I was waiting for the fastball in the middle and he (threw it) and I hit it good and things turned out like I wanted them to,” said Guerra, who later scored in the same inning on a double steal while Jose Izarra swiped second base and later scored on a single by Muniz.

“That’s all it takes in the game of baseball, one big inning,” said Champagnat manager Jorge Aguas, whose Lions couldn’t solve Rosario. “He’s one of the best in the state and probably throughout the U.S. The kid brings it. You’ve got to respect that and tip your hat to him. He did the job against us, shut us down. Nothing you can do about that but just congratulate him.” 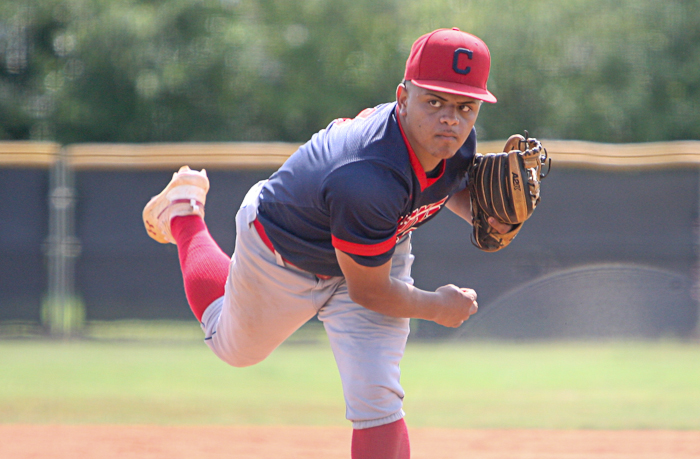 Champagnat starter Nicolas Rivera delivers in the early innings of the 2A-8 championship game on Thursday.

The Victors hoisted the district championship trophy and take another step next week towards defending their state title.

“The thing about this team is every year we just come out and fight,” Muniz said. “We have a fight in us and we don’t back down from anyone. We’re going to try our best to get back to state, that’s the goal and this is Day One.”

“We’re together. We’re like a family, that’s the key,” Guerra added.