Written by Sebastian Caballero on May 9th, 2019 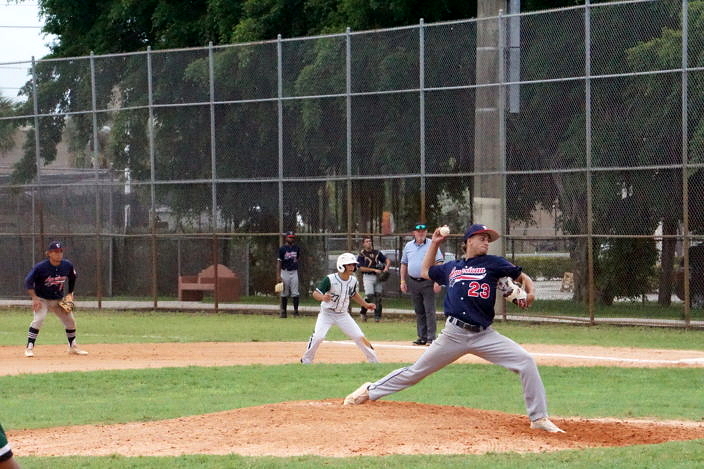 Jordan Naranjo tossed a complete game and picked up the win.

For the first time since 2015, the American Patriots advanced to the regional playoffs, after defeating the Hialeah Gardens Gladiators 8-1 in Wednesday’s district semifinal.

The Patriots (10-11) will face Hialeah in the 9A-13 championship game on Thursday night at Alex Fernandez Field. Hialeah advanced to the title game with a 3-1 win over Dr. Krop in Wednesday’s other semifinal.

The Patriots’ offense struggled to get anything going offensively in the first few innings. But a great pitching performance by Jordan Naranjo kept them in it long enough for Maikal Rodriguez and the rest of the lineup to get the bats going.

“I just told them to keep battling,” said American Manager Corey Estrada. “We know Nick Pazos is a great arm, probably the best in our district, but I told them we would find a way to get to him. We just needed to keep putting the ball in play.”

The game began with one of the most rare plays in baseball. After American loaded the bases with no outs, the Gladiators turned a triple play to bail them out of the jam. Ronnie Belliard snagged a line drive, flipped it over to shortstop Ruben Gandarilla, who threw over to third baseman Michael Cubliete for the 4-6-5 triple play.

The Gladiators jumped on the board first in the bottom of the second inning. After singles by Manny Iglesias and Lucas Moreno, Alvaro Ramirez came through with an RBI single to put his guys up 1-0. 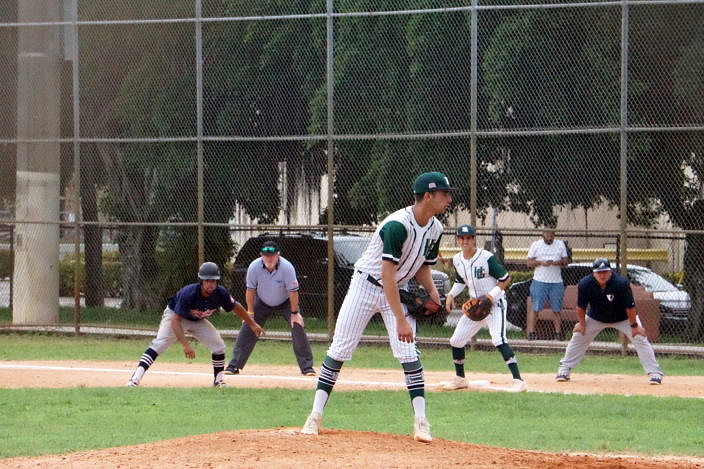 Nick Pazos struck out seven in five innings of work for Hialeah Gardens.

The one run seemed like that was all Gardens would need, as their ace Nick Pazos entered the day with an ERA under one. After a shaky start in the first, the senior right-hander kept the Patriots off the scoreboard again until the fourth inning.

But Keeping pace with Pazos was Naranjo, who kept the Gladiators in check after the second inning.

“I was just trying to stay confident,” said Naranjo. “I knew I had to continue staying ahead of the count and keep dealing.”

The Patriot bats finally woke up in the top of the fifth inning. With one out, Maikal Rodriguez laced a shot down the left field line for a triple, and later scored on a wild pitch to tie the game at one.

In the top of the sixth, Rodriguez came up again, this time with the bases loaded.

“I was kind of nervous to be honest,” Rodriguez said. “It was an important spot in the game, but I just tried having fun.” 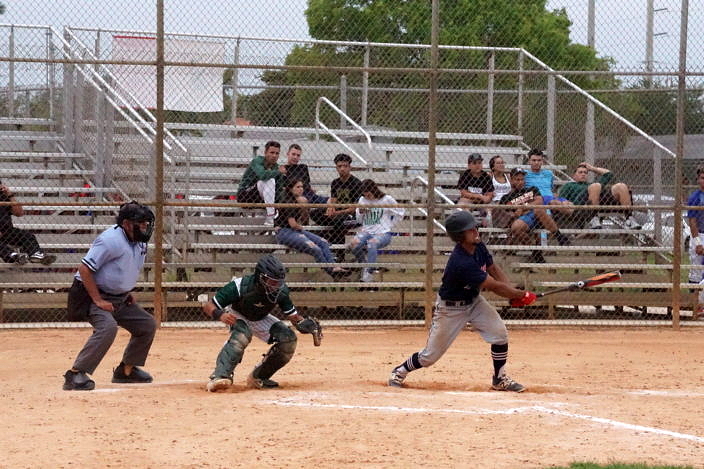 Maikal Rodriguez had three RBIs and three runs for American.

On a 2-2 count, Rodriguez cleared the bases with a three-RBI triple over the left fielders head. That began the hit parade for American, scoring two more runs in the inning, thanks to an RBI single by Brandon Sanchez, and a bases-loaded walk by Nathaniel Ruiz.

The Patriots tallied two more in the seventh, on a two-RBI single by Sanchez. The Patriots shortstop was 3-for-4 with three RBI.

That was more than enough run support for Naranjo on the mound, as he cruised through the sixth and seventh inning to cap off the complete-game victory.

“Our story this season has been leaving guys on base,” said Gladiators Manager Carlos Garcia. “We had opportunities to come through, and we couldn’t get guys in.”

The season ends for Hialeah Gardens, finishing with a 7-15 record.