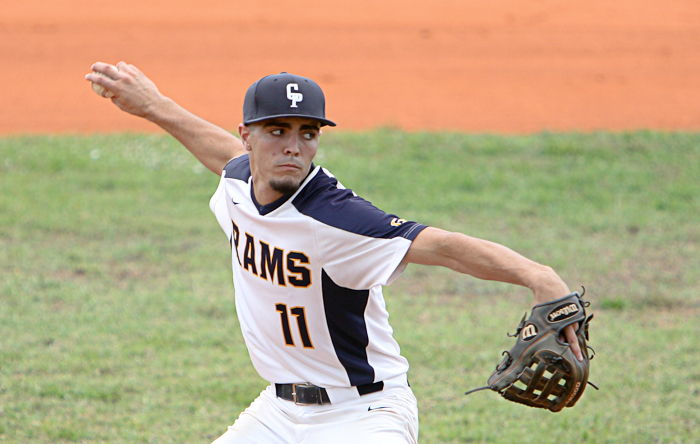 Coral Park’s William Silva threw an eight-inning complete game and had three singles at the plate to lead the Rams on Wednesday.

William Silva lost his no-hitter and the lead in the seventh inning, but Coral Park rallied an inning later to walk-off with a 2-1 win over Miami Beach in a thrilling 9A-14 semifinals playoff game Wednesday at Coral Park. The victory sends the No. 2 seeded Rams to the 9A-14 championship game, scheduled for 3:30 P.M. Friday, when they will host No. 1 seed Coral Gables.

It wasn’t until a heart-stopping finish that Coral Park (11-9) was able to punch its ticket to the finals. With the game tied 1-1 in the bottom of the eighth inning, Zachary Neto singled, moved into scoring position on a wild pitch, and scored the game-winner on the only error of the afternoon in an otherwise outstanding defensive game by both teams.

Add to that, stellar pitching on both sides made it a nail-biter from beginning to end.

Silva carried a 1-0 lead and a no-hitter into the seventh inning before the Hi-Tides (9-13) tied it with a double by Adran Gonzalez. It was Miami Beach’s first hit of the game, which was followed by a run-scoring single by Luis Gonzalez.

“I knew I had a no-hitter and I just wanted to come out and perform for my team and try to get the win with the no-hitter, but it didn’t come out the way I planned,” said Silva, who went the distance, striking out nine while allowing just three hits. “So I just tried to get out of the (seventh) and when I came out in the eighth, I just knew I’ve got this team on my back and I wanted to strike out the side and that’s what I did.”

Silva said that from very early on he knew the game would come down to the last at-bat.

“In my second inning of pitching, my third baseman came up to me and I told him, ‘I feel this game is going to be a walk-off,'” said Silva, who led the Rams offensively as well with three singles. “I just know that every pitch that was coming to me I had to execute every pitch, every breaking ball that he threw me I just jumped on them quickly.”

The Rams led 1-0 on the strength of a towering fifth-inning home run from lead-off hitter Jordan Rollins, who was patiently waiting for a fastball he could drive.

“The first two at-bats he threw me a lot of off-speed pitches, so I was just waiting my turn for the fastball to come,” Rollins said. “It finally came and as a result I hit it out.” 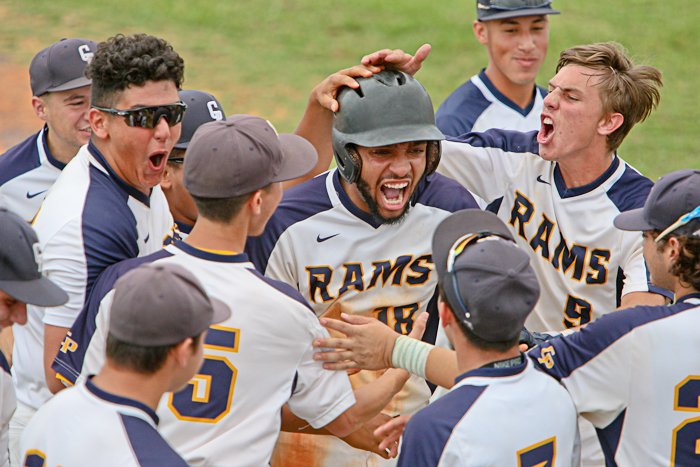 Coral Park’s Jordan Rollins is greeted by his teammates after belting a fifth-inning home run.

The left-handed hitter drove a belt-high fastball on the inner part of the plate well over the right-field fence.

“For sure I knew it was gone when it came off my bat, no doubt in my mind,” Rollins said.

The win made for a happy birthday gift to Coral Park manager Juan Carnicero.

“I wish it would have been over in seven, but we kept our composure and kept going and pulled it off,” said Carnicero, who praised the outstanding efforts of Silva from the time he stepped on campus. “He’s been our heart since he got here as a freshman. Anytime he’s on the mound he gives us a great opportunity.” 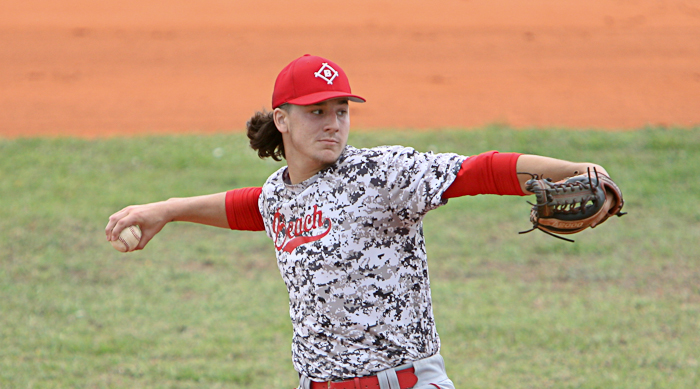 It was also a bittersweet ending to the career of Miami Beach manager Juan Cordero, who very likely coached his last game. At the very least, Cordero will not be back on the sidelines next season.