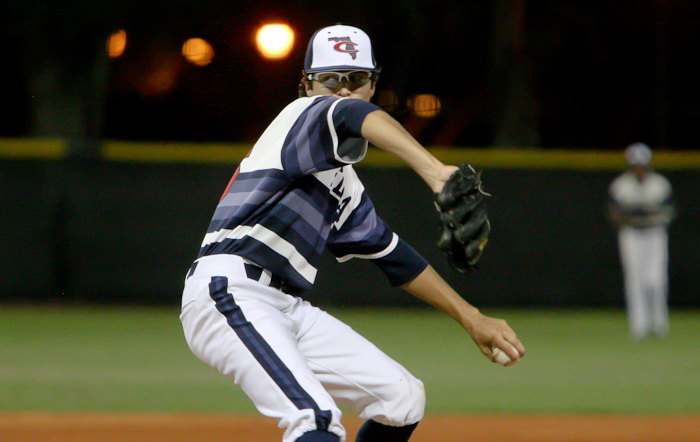 There was no banging of trash cans, and he wasn’t wired up, but nevertheless Florida Christian’s Roylan Quevedo knew exactly what was coming.

The Patriots’ lead-off hitter, ahead in the count 2-1 with the bases loaded, one out, and a tie game in the bottom of the eighth inning, sat on a fastball away. He got exactly that and laced it into left field, scoring Danny Dieppa with the winning run in a 6-5 walk-off win on Tuesday over visiting Somerset.

“I was looking for a fastball outside the whole time. I came up, he threw it to me and I got it. I hit it the other way,” said Quevedo, who went 2-for-5 and scored the first run of the game in the bottom of the first inning to give the Patriots an early lead.

It was a thrilling way to open the 2020 season and the Adidas Tournament at Florida Christian, which runs through Saturday. The hosts, who have reached the region finals the last two seasons, losing both times to Calvary Christian, battled back from a 4-2 sixth-inning deficit to tie it, then answered the Panthers’ run in the eighth inning with two of their own in the bottom half to win in walk-off fashion.

“They had their $5 worth, no doubt,” said Florida Christian manager Chris Brigman, apeaking of the fans in attendance.

But it wasn’t until Quevedo got his money’s worth in the bottom of the eighth that the Panthers could breath a big sigh of relief.

Somerset tied it 1-1 in the third when Alex Restrepo (2-for-3, stolen base, two runs scored) singled and circled the bases on a three-base error. The Panthers retied the game, 2-2, in the fourth inning on a double by Connor James and a sacrifice fly from Mason Elrod, scoring Lucas Lopez (1-for-2, two walks, two runs scored) who opened the inning with a walk. 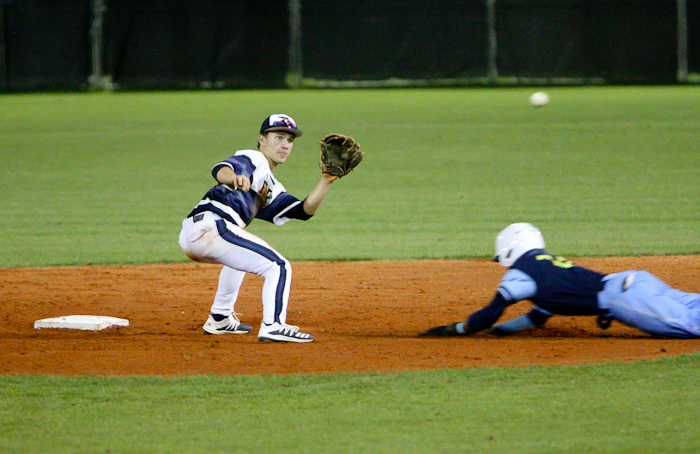 Here is one of many close plays in this close game on Tuesday at Florida Christian.

Restrepo scored the first of Somerset’s two fifth-inning runs, giving the Panthers their first lead of the game, 4-2. Andy Acosta drove him in with a single and then later scored on consecutive singles by Danny Quinones and Lopez, who opened the eighth inning with a walk and later scored to give the Panthers a 5-4 lead.

Each time, however, the Patriots fought back.

“That’s what we teach, that’s what we preach; never giving up until the last out,” Brigman said. “We did that tonight. We found a way.”

Don McKnight came up with a clutch two-out, two-run single in the sixth inning scoring pinch-runner Kevin Fernandez and David Olivera with the tying runs.

“Crazy game, we fought and played Florida Christian baseball,” McKnight said. “I was looking for something away, luckily it fell in and brought in two runs.

Olivera was 3-for-3 with two runs scored, including the tying run in the eighth after drawing the first of four consecutive walks in the inning. He crossed the plate after a patient McKnight coaxed a bases-loaded free pass. 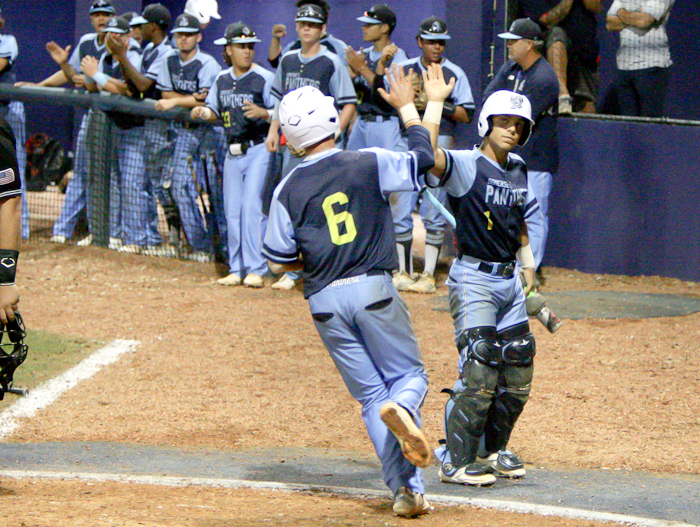 Somerset Academy’s Alex Restrepo scores a run and gets a high-five from Panthers catcher Danny Quinones.

McKnight was hoping to deliver the game-winning hit in the crucial situation.

“It was nerve-wracking,” he said. “I really had to calm myself down, center myself, stick to what I do best, that’s what I did.”

It made for a rough start to the season for a Somerset squad that lost five one-run games last season. But for Panthers manager Arby Sosa Tuesday’s setback wasn’t a defining moment.

“It’s O.K. It’s a good game at the beginning of the year, that’s what we wanted,” Sosa said. “Our kids battled, we came into their house and gave them everything they could handle. But at the end of the day they were a little better than us, and that’s O.K.”