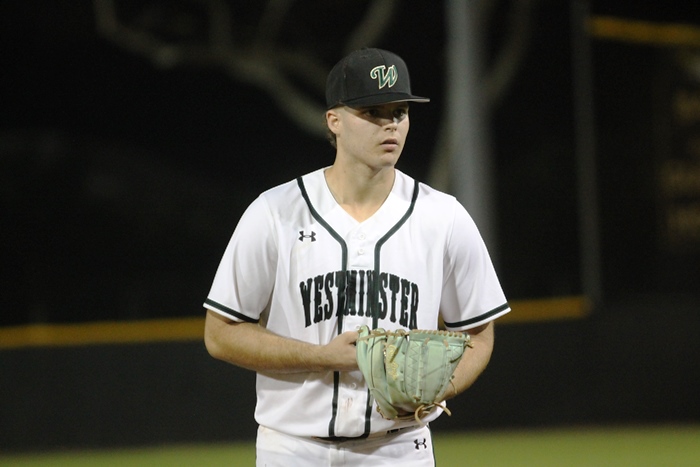 Last season, American Heritage and Westminster Christian played a thrilling nine inning game in which the Warriors came out on top 3-2. On Tuesday night, the two teams kicked off their 2020 campaigns together in the HSBN First Pitch Frenzy, and this time it was the Patriots turn.

Behind a combined one hit shutout from Devin Futrell, Juhlien Gonzalez, and Jordan Carrion, Heritage opened their season with a 2-0 win over Westminster.

“The pitcher’s did a great job tonight,” said Heritage Manager Bruce Aven. “Devin was hitting his spots, and keeping them off balance early. When you face a team with this kind of offensive power, you have to throw their timing off at the plate, and our guys were able to do that tonight.”

Futrell threw 68 pitches in his four innings of work, allowing only an RJ Ibanez single. The junior Vanderbily commit struck out nine and walked one on the night.

Once Futrell was done with his outing, the Patriots turned the game over to Gonzalez, who threw a scoreless inning. Carrion closed the final two innings, striking out three batters along the way.

“Having Juhlien come in, and then Jordan, who has not been on the mound for us in a while, it was a good start to the season for all three of those guys tonight. We knew we were going to be deep on the mound, and it’s always nice to get that kind of performance in the first game of the year,” said Aven.

While the Patriots pitchers were dealing on their side, the Warriors also had their horses on the mound in game one. Victor Mederos matched Futrell for most of the night, throwing four innings and allowing only two hits. The 6’3, 215 pound senior struck out six and walked three.

“I thought Vic had a strong outing,” said Westminster Manager Emil Castellanos. “He showed why he is the top pitcher in the state tonight.”

While runs were few and far between, the Patriots were able to get on the board in the second inning. Gonzalez led off with a single, and Kolby Aven walked, setting up the first jam of the evening for Mederos. The right-hander was able to get the next two outs, but hit Hunter D’Amato to load the bases.

Enrique Bradfield then singled in Gonzalez with the games first run. The damage was minimized when Spencer Butt was thrown out at home to end the inning.

The score remained 1-0 until the fifth, when Gavin Casas launched a solo home run, extending the lead to 2-0.

I was happy for Gavin,’ said Aven. “He had been struggling, and was doing all sorts of things with his stance and at the plate to tweak his swing. As with all of our guys, when they let the game come to them, instead of getting out in front and chasing pitches, the game slows down, and usually that is when you get results like Gavin did tonight.” 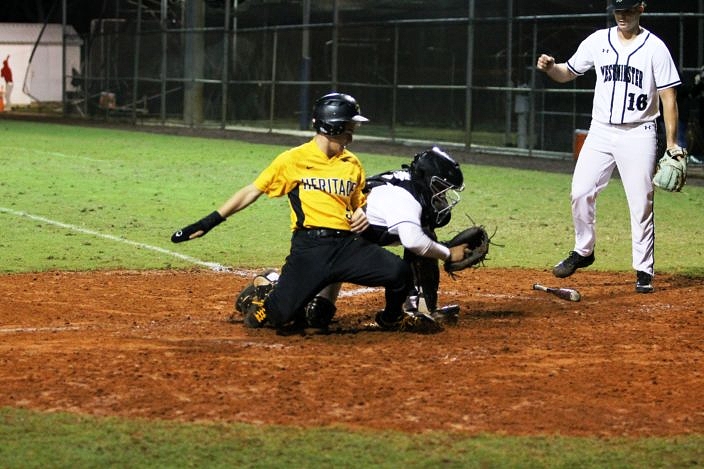 The win was a sweet one for Heritage, but the squad has little time to enjoy. On Thursday, they will face potential Miami powerhouse Miami Christian, with defending state champion Venice on tap Saturday.

“These guys all want to play college baseball, well the type arms we are seeing and are going to see this week, that is college baseball,” said Aven. “This is the reason we play an event like this, so we can see the best arms and teams we can get early in the season.”

For the Warriors, their journey through week one is equally daunting, as they face traiditoonal Palm Beach power Park Vista on Wednesday, and then state runner up Cardinal Gibbons on Friday.

“When the clock turns to midnight tonight, we forget about this one and we move on to the next game,” said Castellanos. “With the season coming as quickly as it does, there is no time to sit on this loss. These are two of the best programs around, and it’s always a battle when we get together. Sometimes we win, and sometimes they do. Tonight, the game could have gone either way, but it was their night.”