No. 1 Braddock’s 7 Outslugs No. 15 Archbishop Carroll 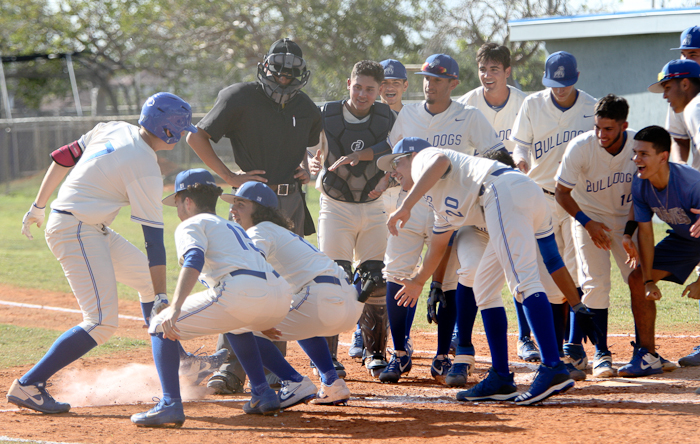 Braddock celebrates one of seven home runs hit off of Carroll pitching on Thursday in a 12-10 win at home.

The wind was blowing out and the short porch in left field was inviting on Thursday afternoon at Braddock High School. The Bulldogs, undefeated and ranked No. 1 in the Miami-Dade Power Rankings, took full advantage, belting seven home runs in a 12-10 win over visiting No. 15 Archbishop Carroll Bulldogs.

Six different Braddock sluggers went yard as they battled back from deficits of 6-4 and 10-8 to stay unbeaten at 8-0. Two players hit homers as well in the slugfest for Archbishop Carroll, now 4-1-2 for the season.

“It’s one of the rare occasions where the wind blows out here, it doesn’t blow out much,” said Braddock manager Wesley Morejon. “Lot of barrels were found today on both sides. Thankfully we came out on top with a few more.”

It wasn’t the prettiest win by any stretch.

“Lots to learn from this game,” Morejon said. “Definitely not our best game but credit to (Archbishop Carroll). They’re playing well, they’re swinging it well, clearly they showed it today.”

Braddock’s Yohandy Morales won the Home Run Derby with two of his own, including his team’s initial one of the game in the bottom of the first inning. It was in answer to Luis Rondon who blasted a two-run homer in the top of the first inning to stake Archbishop Carroll to an early 2-0 lead. 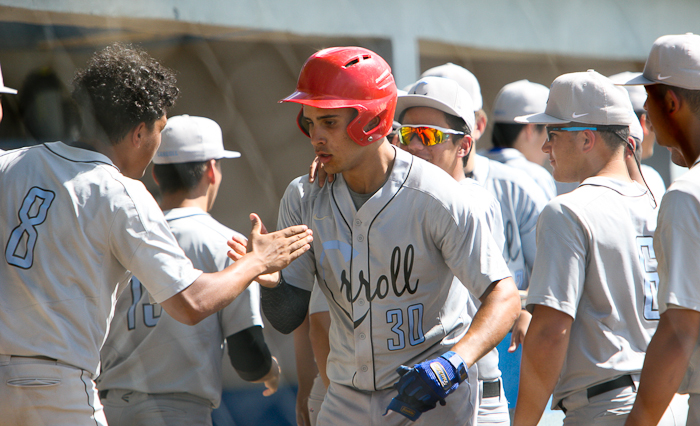 Carroll hit two homers as well on Thursday in the Bulldogs’ 12-10 loss at Braddock High School.

“I was just going in there thinking fastball, trying to stay behind the ball and coming up big for the team,” Morales said. “At the end of the day we all did good, all the hitters, we pulled off a good team win against a really good ACC team.”

Morales said he was sitting on the fastball and took one over the left field fence. He also got hold of an off speed pitch and drove it over the fence as well.

“First one was off speed and the second was a fastball,” Morales said. “Just stayed back, got my hands through the zone, stayed back a little and everything worked out,” he said of his second long ball, a two-out, two-run homer in the sixth inning that tied the game at 10.

Later in the sixth inning, Jean Baldoquin delivered a two-run homer to break the tie and give Braddock a 12-10 lead. Baldoquin went 2-for-4 with two RBIs and a pair of runs scored.

Braddock went back-to-back again in the fourth inning with Angel Torres hitting a three-run homer before Chris Churchman followed with a solo homer. 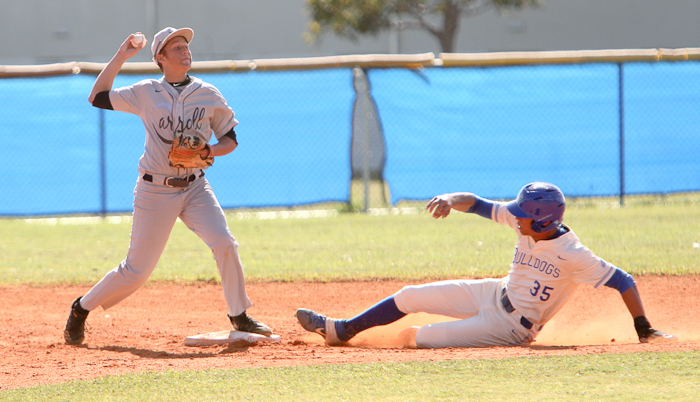 Carroll turns a double play in its game on Thursday at Braddock High School.

Carroll scored four runs of its own in the second inning, going small ball. Eduardo Perez and Alfredo Armeda opened the inning with singles and Brandi Cecilio walked. A wild pitch produced one run before Michael Figueroa delivered a two-run triple, then later scored on a wild pitch.

“Both teams played good,” Archbishop Carroll manager Servio Borges said. “I’m proud of the kids,” Borges said of a team that is made up of 80 percent sophomores. ”They fight, that’s what I want to see. They play. They put 100 percent on the field, that’s what I want. I think in a couple of years we’re going to be one of the best teams in Miami.”

Figueroa added to Carroll’s lead in the fourth inning with a single and two stolen bases. He scored after his steal of third on a throwing error to increase Carroll’s lead to 7-4.

The lead see-sawed back and forth with Braddock’s four-run fourth giving those Bulldogs an 8-7 lead. But Carroll’s Bulldogs regained the lead in the fifth inning on a two-run homer by Ian Lima. They made it 10-8 in the top of the sixth when Adrian Falcon singled, stole second and scored on an error.

That’s when Morales led one last charge in the bottom of the sixth inning, and Braddock pitcher Kader Rabagh retired Carroll in order in the seventh, striking out two, to seal the victory.