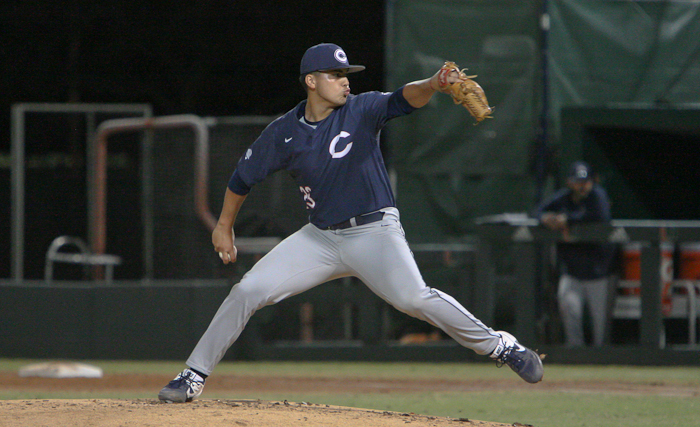 Columbus pitcher Nick Regalado threw a complete-game two-hit shutout, striking out 10 on Monday at the University of Miami.

The pitcher’s duel between Columbus’ Nick Regalado and Belen Jesuit’s Alejandro Morales came down to the seventh inning on Monday night in the Be the Light Foundation fundraising game at the University of Miami’s Alex Rodriguez Park at Mark Light Field.

Columbus’ Gabriel Perez sent a dribbler down the third base line for a single to open the top of the seventh in a scoreless tie. He was sacrificed to second by Kyle Marti, and came home on a RBI single by Diego Prieto to score the only run of the game. Regalado then finished his complete-game two-hit shutout, working out of a jam in the bottom of the seventh to preserve a 1-0 win that avenged a 4-0 loss to the Wolverines in tournament play on Feb. 21 at Columbus High School.

Prieto had made good contact in his first two at-bats but had nothing to show for it but loud outs to center and right field. He watched a 2-1 slider cross the plate and with two strikes was looking for a similar pitch.

“I knew he’d throw it again because he threw it good,” said Prieto, who proceeded to chop a big bouncer past Belen Jesuit’s drawn-in infield to produce the game’s lone run. “I was just waiting for (the slider) and tried to hit it up the middle. I shortened up, I knew he was going to try to get me off balance. So I shortened up, got wide, and tried to poke it through a hole, which I did.”

Prieto hit it off the end of the bat but got enough of the pitch to bounce it past the infield.

“I saw it bounce over and everybody went crazy,” Prieto said. “It was a great feeling.”

It was enough offense for Regalado, who was in control throughout and did not allow a base hit after the third inning.

“It was a great team win, it’s all about team work,” said Regalado, who struck out 10 while giving up just two hits – both singles – and didn’t walk a batter. “Commanding the strike zone, get ahead on the count and just dominate,” he said of his approach. 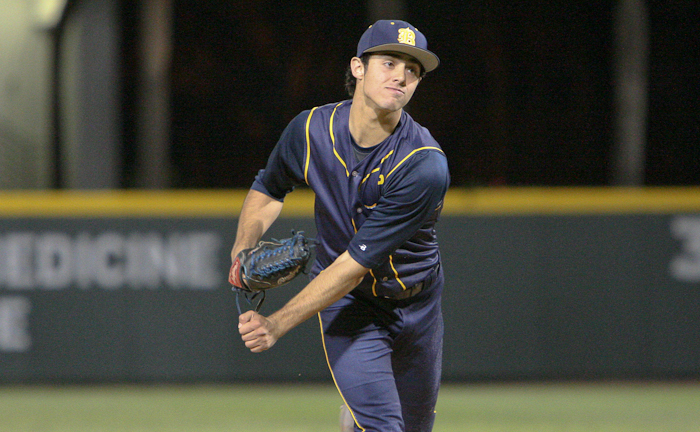 Things got a little shaky however in the seventh for Regalado, who hit two batters. It was the only inning in which he allowed more than one baserunner.

“Probably endurance-wise, got to work a little more on it,” he said. “But I went through it, kept going, and got the ‘W’.”

Fittingly he struck out the final batter of the game.

Morales was outstanding as well for Belen Jesuit, striking out eight batters over 6 1/3 innings while allowing just four hits – all singles. He walked just one batter.

“It was a great pitched game, well played defensively, really good game,” said Columbus manager Joe Weber. “It was a great turnout for the foundation. I thought everything went great.”

“The main thing is it gives two really good programs a chance to do something really good for a foundation that’s doing some amazing things in Miami. The Ari Arteaga Foundation has done an incredible job in the short amount of time with homeless kids here in Miami.

“I don’t know if people realize the great work they’re doing. It’s more than just scholarships here and there for kids. Their main efforts right now are on the homeless kids down in Miami. There’s a ridiculous number of homeless high school students that they’re reaching out to and helping out with in all different types of ways.”

It was announced during the game that more than $21,000 was raised.

“The fact that we were able to draw a nice crowd out here for a great purpose and raise over $20,000 for that foundation is the main focus of the night,” Albert said. “We feel honored and blessed to be able to do that.”