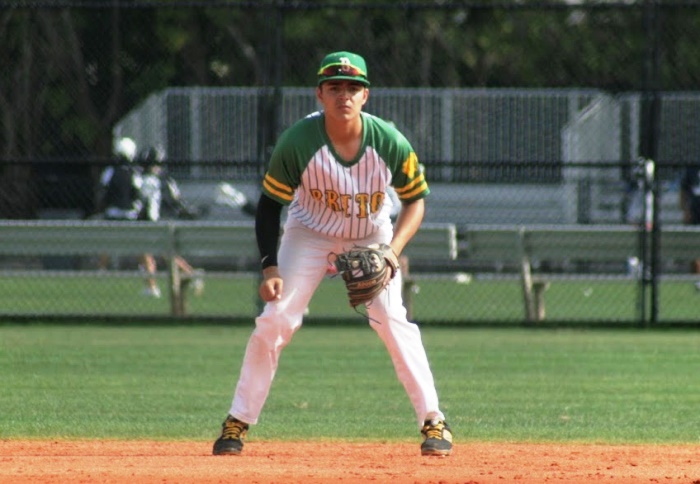 Ozzyel was hitting .450 when his season was cut short.

Ozzyel Gabarro, #14, from the Brito Panthers, is an infielder/outfielder that graduates with the class of 2020. Ozzyel was hitting .450 when his season was cut short. He gave us some insight into what the past few months have meant to him.

First off, I want to start by giving thanks to all my coaches and teammates that I had through these amazing four years of high school.

If anyone would have ever told you that you would not play your senior season of high school baseball, what would you? What do you think would be the cause of that, injury, quitting baseball,suspension. Taking away the last year of high school baseball from so many seniors due to a virus is something that no one would’ve guessed.

My name is Ozzyel Gabarro, a senior at Brito Miami Private. “This is the year we win it all”, “Brito 2020, state champs”, “we ain’t afraid of anyone”, all these were sayings you heard in the dugout pregame, in the school before games, on the way to games. It wasn’t a way of encouraging the team it was something we all believed and were going to stop at nothing to make it happen.

The team was hot, got off to a great start at 7-2 and those two losses weren’t ones that came easy for the other team. Hitting-wise we were hot. I was hitting .450 and I was third on our teams leaders. Pitching-wise I believe we had the best rotation in Miami-Dade. This was going to be a season of dreams.

Then rumors began about Covid-19. None of us actually took this serious until the unknowingly last game we played. We arrived at the field about three hours before the game, and this woman working at the concession stand told us this is the last game of the season. We took this as a joke and went in with our pregame batting practice.

I came up in the bottom of the sixth and delivered with a 2-RBI single helping us secure the victory 8-5 against Highlands Christian. After this game I had a long and lonely drive home. I then began to actually think about what the women had told us, was this just for their school that they going to cancel, or is this going to be the end of the high school season.

Trying to stay positive I tried and tried to forget about it but it just kept popping up in my head.

This is the worst possible situation that could’ve happen. I went from a couple of schools telling me they wanted to see me play, to them telling me that everything is currently on standstill and I’m pretty sure there are a lot of seniors in this situation, anxious and just wishing they had one more chance to play with their team. To play in front of scouts, to play in front of the school of their dreams, and I wish I had the same. I wanted Grad Bash. I don’t want a prom, I just want to play one more game with my boys.