On a field littered with future major college talent including two sons of former major leaguers, it was high school baseball at its finest on Thursday afternoon when two of the top programs in Miami-Dade County, Westminster Christian and Doral Academy went at it like a couple of prized heavyweights.

When it was over, it was Doral that emerged the victor when first baseman Marcus Franco, faced with an 0-2 count against Christian Mejia, delivered a one-out, bases-loaded walkoff base hit down the right field line that was fair by inches to give the Firebirds a come-from-behind 3-2 victory at Doral’s Doug Rodriguez Field.

“The first pitch he (Mejia) came away and hit the outside corner and did it again on the next pitch,” said Franco, a Nova Southeastern commit who finished two for two at the plate with two RBIs. “So I was thinking if those first two worked and he had me in an 0-2 hole, he might come with something away again which he did with a fast ball out and I just reached out and got some bat on it and pushed it down the right field line.”

The loss was the first of the year for the Warriors who slipped to 5-1 while Doral moved its record to 4-1-1.

“This is the kind of game today that gets you ready for the playoffs in May and kind of had a real playoff feel to it,” said Doral manager Ralph Suarez. “Westminster has a great program with a lot of tradition and (manager) Emil (Castellanos) does a great job. We knew it was going to be a battle right from the start between two evenly matched teams and that’s exactly how it played out.”

When Westminster snapped a 1-1 tie by plating a run in the top of the fifth when Jayden Melendez drew a one-out bases-loaded walk, it appeared that might be enough. Warriors starter and FIU commit Joel Pineiro Jr., son of Joel Sr, who played 12 seasons in the big leagues including six with the Seattle Mariners, had been in shutdown mode through the first five innings, yielding just four hits, while striking out seven and not walking a single batter.

But then came the last of the sixth when Renzo Gonzalez, one of three University of Miami commits on the Doral roster (along with Gaby Gutierrez and Manny Marin), led off with a single and Franco followed with another hit to put runners on the corners with no outs. 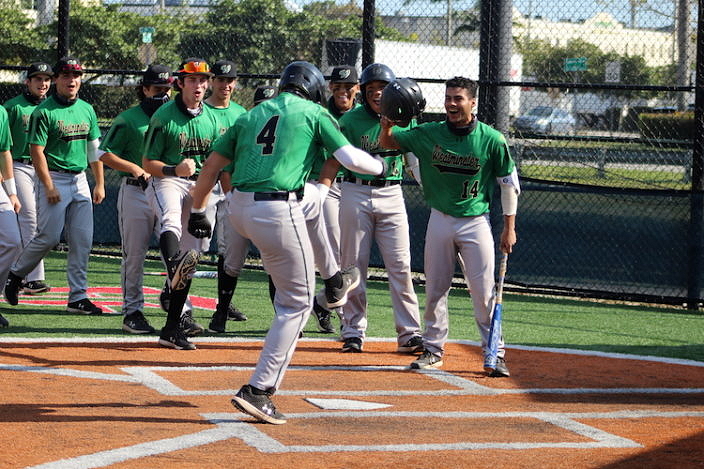 It was here that Suarez went to his bench and it paid off when pinch hitter Adrian Santana, facing an 0-2 count, got something he could handle and hit a towering shot off the fence in left center tying the game and leaving runners on second and third.

“He gave me something inside in the zone which surprised me and I turned on it and got all of it,” said Santana.

It would be Pineiro Jr’s last pitch setting the stage for a Houdini-like feat from Mejia who inherited the second-and-third, no outs situation and proceeded to record back-to-back strike outs before inducing a ground ball to shortstop ending the inning and leaving the game tied.

When Doral’s Abdier Rivera, another pinch hitter off the bench, led off the last of the seventh with a double down the left field line and was sacrifice bunted down to third by Sebastian Barrios, Mejia was in a jam again as the top of the lineup in the form Gutierrez and Gonzalez was due up.

It was here that WC manager Emil Castellanos decided to go ahead and intentionally walk both UM-bound players to load the bases in an effort to try and get a double play ground ball and send the game to extra innings. But Franco came up and had other ideas.

“If I had to do it all over again, I would do the same thing the next 100 times the exact same way,” said Castellanos. “Christian had done a great job of working out of an impossible jam the previous inning so the hope was that we could get a ground ball and get out of it. 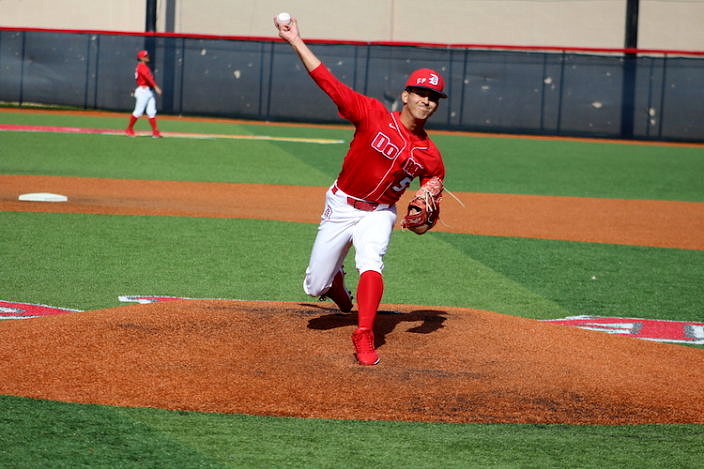 “You have to tip your cap to the Franco kid, he did a good job of battling and anyone who doesn’t tell you this can be a game of inches is lying because the ball down the right field line was fair by maybe six inches. If it’s foul, who knows, maybe we get that ground ball on the next pitch and take it to extra innings. A great game today between two quality programs.”

Before anyone could settle down in their seat, Westminster took the lead in the game when Vanderbilt commit Sal Stewart greeted Doral starter Evan Demurias with a towering shot over the screen in right-center on the second pitch of the game.

The Firebirds got the game tied with a run in the last of third on a two-out rally when Gonzalez singled to left, stole second and one pitch after the successful steal, Franco singled up the middle to bring him home.

“Today was special because we love competing against really good teams and Westminster is one of those teams,” said Franco. “So even though it’s just a regular season game, this is the kind of win that can really give us a whole lot of confidence moving forward.”