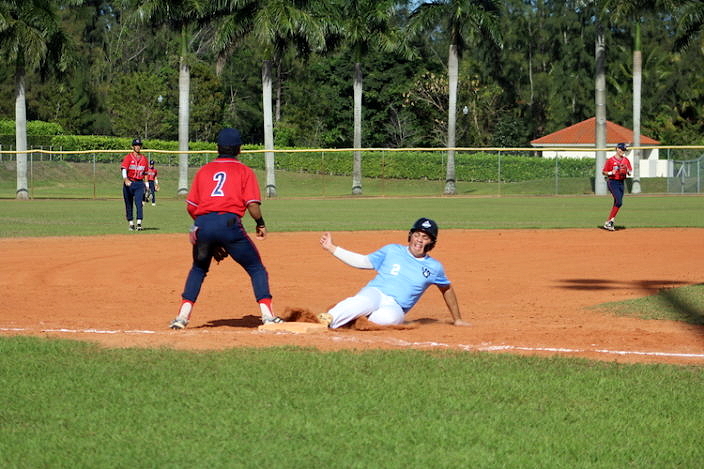 Imater’s Gianni Rodriguez slides into third safely after tagging up from second during a first inning rally.

The only thing missing for Gianni Rodriguez might have been a Houdini hat.

That’s because Rodriguez pulled off something nearly Houdini-like on Thursday afternoon when the closer for iMater Academy took the mound in the top of the sixth in a nearly impossible situation.

With his team clinging to a one-run lead against district rival Hialeah Educational Academy (HEA), Rodriguez inherited runners on second and third and no outs.

Not only did he work his way out of that jam without giving up a run but then, with HEA having the top of its lineup to lead off the seventh, mowed down all three batters in order, striking out two to record a well-earned save as the Imater edged HEA 3-2 at Westland Gardens Park.

“It’s always a big role to be the closer because the game ends on you, especially if its close like it was today,” said Rodriguez, who played first base for the first five innings before coming in to relieve starter Alexander Hernandez. “You’ve got to be there to close it out, you have to have nerves of steel. You can’t be scared to get up on that mound and I step up there and try to get it for my team and at the end of the day whatever happens happens. I do my best and hopefully that’s good enough.” 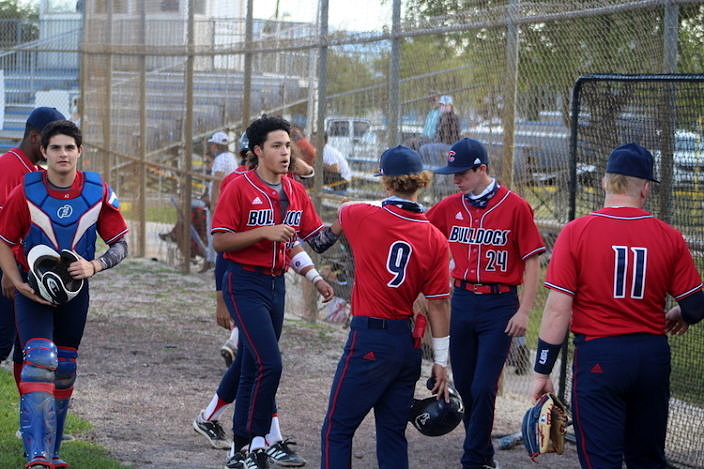 HEA’s Kevin Menendez is greeted by his teammates after scoring his team’s first run in the second inning.

The win moved Imater’s overall record to 5-2-1 and 1-1 in District 14-3A while the loss was HEA’s first in district play but dropped the Bulldogs, who have completed a brutal stretch of tough opponents, to 1-7 overall.

“We preach our starting staff to get us to the fifth and we will have a chance to win ball games,” said Imater head coach Antonio Rodriguez (no relation). “Our starting guys have bought into that and they go out there knowing that they need to get us to the fourth or fifth and we have a chance from there. Then you have Gianni at the back end and, like he said, nerves of steel. The kid has great stuff, good velocity, drops down from different angles and just goes out there and pounds the zone. Every time we have an opportunity and it’s close, that’s who we’re handing the ball to.”

Hernandez indeed did his job as he got through five innings allowing just four hits and yielding just one run and enjoyed a 3-1 lead.

But when HEA’s Nathaniel Gomez led off the sixth with a base hit to left which was followed with a single to left by Alex Pereira and an RBI double off the center field fence by Victor Sanchez to make it 3-2, creating the second and third, no outs situation, Antonio Rodriguez was headed to the mound to summon up Gianni.

After recording a huge strikeout for the first out, Rodriguez intentionally walked Brandon Rodriguez to load the bases in order to try and set up a ground ball double play possibility. He would not need it as he got Bryan Rodriguez to foul out to first base for the second out before striking out Edward Paneque to end the inning.

Gianni also did it on the offensive end as well as he finished the day 2-for-3 at the plate with two RBI’s.

His double to left center scored Rey Plasencia to cap a two-run first inning before he stepped up in the bottom of the fifth and with two outs, laced a single to left scoring Bryan Rivero, who had just doubled, from second to score what turned out to be the game-deciding run.

“My main priority is to get the ball in the zone because at the end of the day, not everybody is going to hit a bomb off you so you’ve got to put it in the zone and see what happens,” said Gianni Rodriguez. “If your stuff is on, and my stuff was on today and I was hard to hit, then good things will happen. Getting that first strikeout in the sixth was the key.”

“My job is to try and go out there and get us to the fifth inning or so and then hand the ball to this guy,” said Hernandez while pointing to Rodriguez. “Then we just let him take it from there and that’s exactly the way we did it today.” 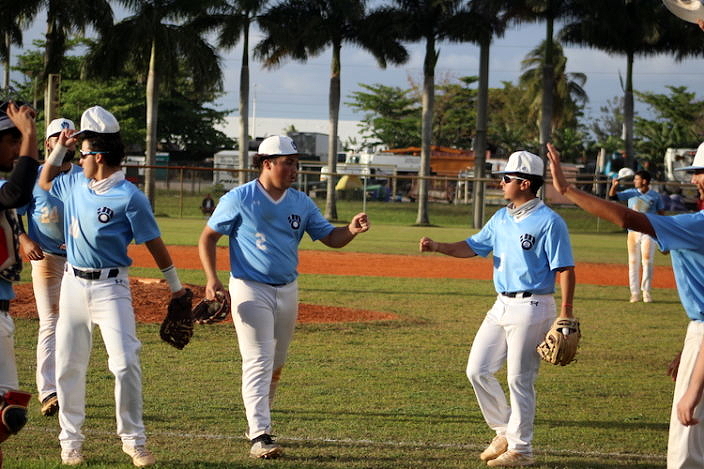 Imater Academy closer Gianni Rodriguez was the man of the hour on Thursday as he came through with a clutch performance and is congratulated by teammates following the final out.

On the other end of the spectrum, it was a bitterly disappointing loss for HEA and head coach Laz Fundora.

In what might be one of the toughest schedules in South Florida, the Bulldogs were coming off a four-game murderers row stretch in which they played and lost to Gulliver Prep, Southwest, Plantation American Heritage and Marjory Stoneman Douglas.

Even tougher was the Bulldogs were three outs away from springing a major upset two days earlier when they took a 4-3 lead to the last of the seventh against Douglas up in Parkland before the Eagles rallied to score twice in their last at-bat.

“It’s the kind of schedule I like to put together year in and year out because you want to play tough competition to get ready for your district play and that’s the only way you’re going to learn how to play the game is playing against quality teams,” said Fundora. “But you play those games so you can win a game like today and we didn’t get that done. You’ve got to come in and put a game like this away, especially when you have the tying and go-ahead runs in scoring position late in the game. Very disappointing.”