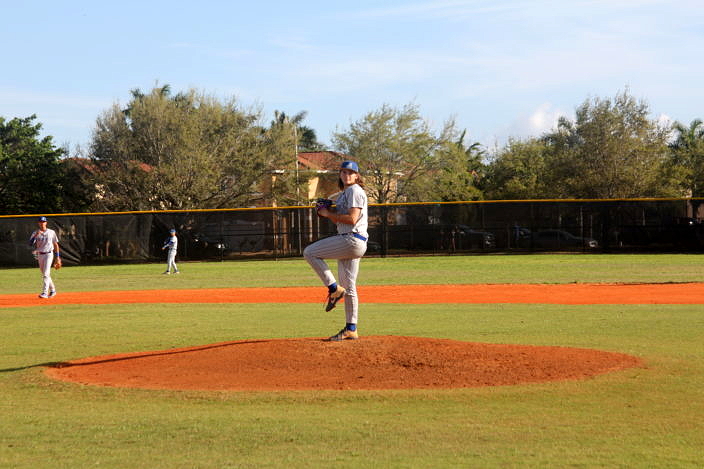 After a strong 8-1 start to the 2020 season was cut short due to COVID-19, it seems like the Braddock hasn’t missed a beat in the new year. The Bulldogs received some help from timely walks, and hit by pitches, in the later innings to defeat the Falcons 15-4.

The Bulldogs were also treated to a lights out pitching performance from senior Chris Churchman, who came into the game to start the 3rd inning.

The starters on the afternoon were Lazaro Collera for the Bulldogs and Christian Suastegui for the Falcons. Collera ran into trouble early in the 1st inning after allowing a bases clearing double to Ferguson senior Mario Abreu, But ultimately settled down before being pulled in the 3rd inning.

Already down 3-0 heading into the top of the 2nd inning, a leadoff double by Jose Hernandez, who was 3-for-4 with 3 RBIs on the day, got the offense going for the Bulldogs. After a walk to catcher Victor Davila, Adriel Benitez reached on a bunt single, which was followed by a double play that allowed Hernandez to score the Bulldogs first run of the afternoon.

After a wild pitch, the Bulldogs scored again, cutting the lead to 3-2.

Headed into the top of the 2nd, a walk to Alejandro Rodriguez brought leadoff man Ernesto Rodriguez to the plate. Rodriguez laced a 1-1 pitch to left field to pad the Falcons lead at 4-2.

Moving to the top of the 4th, Hernandez came to the plate and lined the first pitch up the middle for a base hit. A Davila walk, brought Benitez to the plate in a similar situation in which he gave his club an RBI on a groundout making it a 4-3 game.

Throughout the game, the Falcons just couldn’t get their offense rolling as they left many on-base and couldn’t cash in with runners in scoring position.

“We just have to keep going after today, Braddock is a good ball club,” said Falcons Manager Mike DiRosa. “We were in the game at 4-3 but our relief pitching let us down by not throwing strikes. It was a tough day, but we can’t dwell on losses regardless of the final score.”

In the top of the 5th inning, the Bulldogs were able to load the bases with two outs. Hernandez, once again stepped to the plate in a big spot and walked to tie the game 4-4. A Davila walk followed, giving the Bulldogs their first lead of the afternoon 5-4. 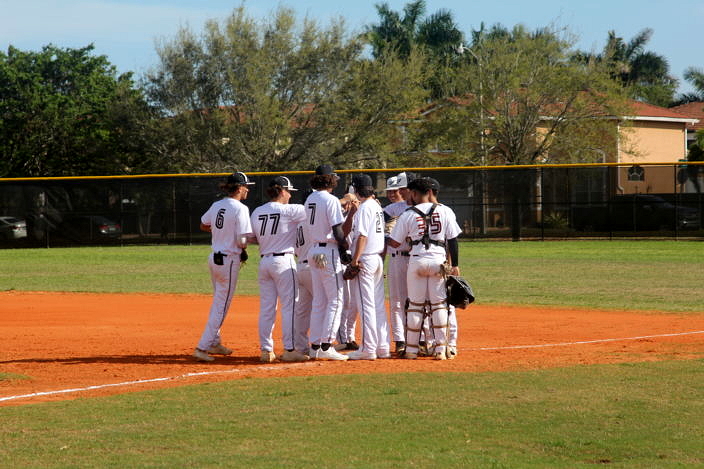 What decided the eventual win for the Bulldogs was a 6th inning which began on a leadoff double by senior Daniel Verez. After Ozzie Martinez reached on an error, moving Verez to third, Mel Rubiera grounded into what would’ve been the first out of the inning, but reached on an infield error extending the lead to 7-4.

The Bulldogs ended up putting three more runs on the board upping their lead to 10-4 to end the top of the 6th inning. That, followed by five more runs in the top of 7th inning, made it a comfortable 15-4 lead.

Churchman, who was looking to close out the game, got himself out of a bases loaded threat to end the game. He was masterful in his outing going five innings, allowing four hits, on no runs, and five strikeouts.

“My goal today was get ahead, get the first pitch strike, and use my cutter to get some outs,” said Churchman. “If I put zeros on the board, my team can score for me.”

Manager Wesley Morejon, who’s going into his 6th season as the Bulldogs skipper, was pleased with his clubs poise to stay centered even down early.

“This is something we preach day-in and day-out to our guys,” said Morejon. “Teams might beat you early, but we play seven (innings) over here and we had confidence in our team to come through in big spots today.”

The Bulldogs will look to extend their winning streak to seven as they take on Miami Christian (1-3-1) Wednesday at 3:30 pm.