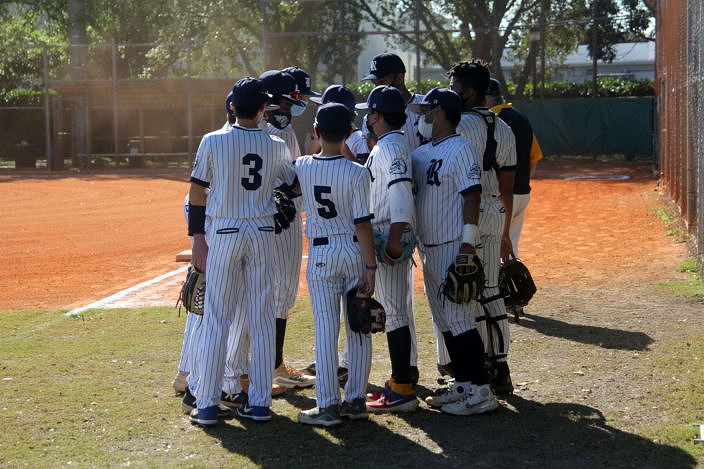 The young-gunned Riviera Prep Bulldogs have shown to start the season that youth won’t get in the way of a potential playoff run in late April. And that didn’t stop on Wednesday afternoon against Palmer Trinity.

On the mound for the Bulldogs was senior Luis Angarita and for the Falcons Jeremy Shodell.

Angarita was nothing short of masterful on the mound and at the plate. He ended his day only giving up four hits in four innings with five strikeouts. Offensively, he went 3-for-4 with 2 RBIs.

“I was just looking to pound the zone, I know I have a good infield behind me to back me up,” said Angarita. “Offensively, I tried to keep it simple. Stay up the middle and the let the rest fall into place.”

In the bottom of the 1st, Angarita got the ball rolling with a leadoff single. After a Marc Quarrie single, Angarita was able to advance to third on the throw. Stepping to the plate was University of Miami commit and county’s leader in RBIs, Eric Fernandez who hit a sacrifice fly to give the Bulldogs a 1-0 lead.

With Quarrie at second and two outs, second baseman Yohanni Vasquez blasted a 2-1 fastball over the left field fence for a two-run home run extending the lead 3-0.

Leading off the bottom of the 2nd, senior DJ Flowers ripped the first pitch to the right side for a base hit. Flowers then reached second on a passed ball then was able to score on an error making it 4-0.

After an infield error, Angarita stepped to the plate once again and ripped a pitch to the gap for a triple scoring JD Diaz all the way from first. Another error allowed Angarita to score extending the lead to 6-0.

Going into the third inning, Angarita was in control by getting his first one-two-three inning of the afternoon. Moving to the bottom of the 3rd, Flowers ripped a 3-2 pitch down the line for a double. The next batter was Ely Halton singled moving Flowers to third. Angarita then stepped to the plate in a similar spot and singled to left field allowing Flowers to score from third. 9-0 lead now. 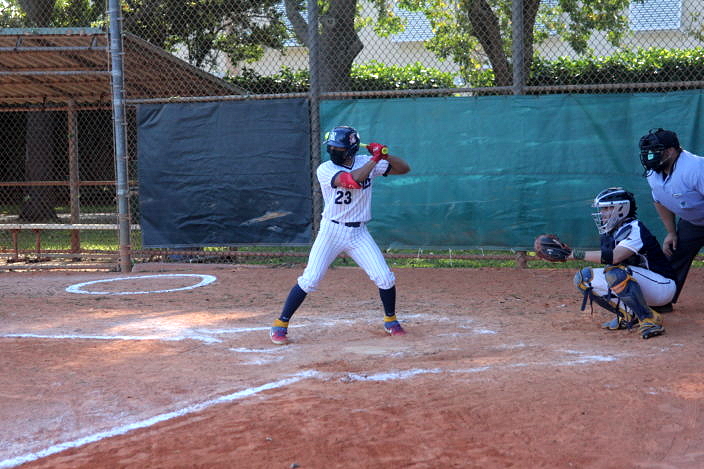 Next batter was Quarrie, who almost hit the ball over the fence in the next field in center field for a two-run home run. The score was now 11-0 and that’s how it would stay until the end of the game.

In the top of the 5th inning, Fernandez came into the game to close it out and got a one-two-three inning to shut the door.

The Bulldogs came into the game with a lot of fire and kept the same energy throughout the game. They never let up.

“Our motto here is ‘Try and hit the ball as far as you can and run hard,” said Bulldogs manager Emilio Fernandez. “We’re not uptight, we don’t have any rules and regulations, we tell these guys to just go out there have fun.”

For the Bulldogs, they’ll look to stay hot as they play the Dade Christian Crusaders (0-4) Friday at 6:00 pm.

As for the Falcons, they’ll be looking to rebound after a tough loss as they take on the Somerset South Hurricanes (0-3) on Friday at 3:30 pm.