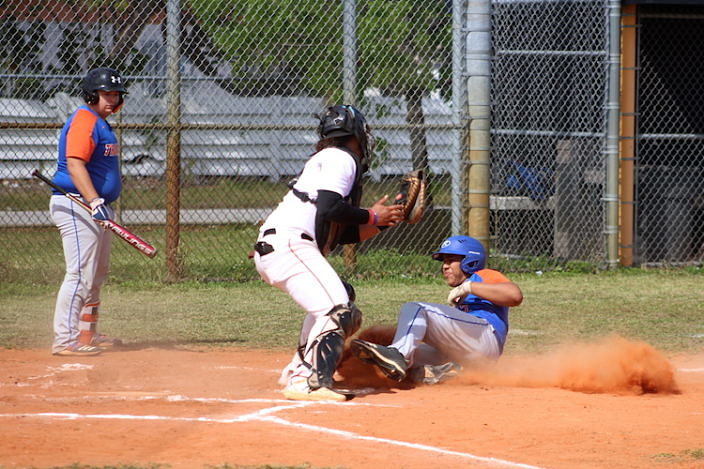 Carol City catcher Ibrahim Marrero puts the tag on HML’s Jonathan Granados at home as he tries to score.

HML starter Adrian Cruz was nearly unhittable on Thursday afternoon as he struck out 13 Carol City batters and yielded just 3 hits to lead his team to victory.[/caption]

Having lost their last four games after winning three of their first five to start the season, Hialeah-Miami Lakes was looking to get back to its winning ways on Thursday afternoon and got it thanks to a brilliant outing by starting pitcher Adrian Cruz.

Cruz bordered on dominant as he finished with 13 strikeouts against just three hits yielded as the Trojans topped Carol City 4-2 at Carol City High School.

At one point, Cruz struck out 11 of a possible 13 batters ranging from the last two outs of the first to the final three outs of the fourth before, having reached a pitch count of 83, HML manager Arian Alcala pulled him off after six innings leaving it up to his bullpen to close it out.

That almost didn’t happen as the Chiefs, trailing 4-1 coming up for their last at-bat, fought back gamely and nearly tied the game.

After David Gonzales recorded the first out, Carol City’s Ousman Jobarteh beat out and infield single, Gabriel Florentino drew a walk before Ibrahim Marrero stepped up and drilled a shot to the left field fence scoring Jobarteh and leaving runners at second and third with only one out.

With the tying run at second, Alcala went to his catcher-turned-pitcher, Juan Pablo Marino to come in to try and get the last two outs and protect Cruz’s masterpiece.

He did just that as he induced a ground out to third from Randyl Dyer and struck out Joshua Spellman to end the game as the Trojans improved to 4-6 while the Chiefs fell to 3-7.

“I just had to go in there and make sure I closed the door,” said Marino. “Adrian had worked hard the entire game to get us in position to win the game and we did not want all that work to go to waste.”

His manager also knows things got a little dicey.

“It sure got interesting in that last inning but we found a way to close it out and that’s what counts,” said Alcala. “Adrian was great out there today and his last two outings he’s been getting better and better. Has a tendency to struggle a little early but eventually he settles in and that was the case today.” 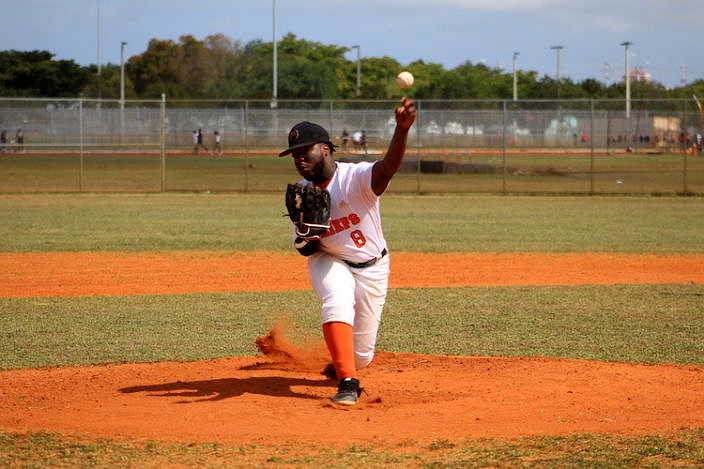 Alcala referred to Cruz’s early game struggles when, after the Trojans grabbed a 1-0 lead in the top of the first when Cruz brought Marino, who had reached third with one out, home on a groundout to first, he gave up two base hits, a walk and a hit batter as the Chiefs tied the game at one. With the bases loaded, Cruz struck out the last two batters in that inning to get his string of K’s started.

“I reduced my speed on a little bit and then I started to throw more strikes and I was fine after that,” said Cruz on his first inning struggles. “My curve ball and slider were really working well and I still felt good and felt like I could’ve’ finished but coach said that it was too many pitches so that was it. Things got a little close at the end but I had faith that Juan Pablo would come through and he did.”

HML grabbed a lead it would not relinquish in the third when Marlon Mirando led off the inning with a bunt single. After he stole second and advance to third on a ground out, he came home on a two-out single to right by Daniel Gamon.

The Trojans added two more insurance runs, which turned out to be the difference in the game, in the fifth. After Juan Sola led off the inning with a walk, Marino followed with a single to put runners on the corners with no outs.

A balk scored Sola from third and moved Marino to second. Two outs later, with Marino on third and Jonathan Granados on first after he drew a walk, Granados took off for second in a steal attempt. When the throw went down to second, Marino raced home with the fourth run.

Despite the loss, Carol City starting pitcher Zion Cooper turned in a nice effort as he went five innings, striking out seven and yielding just four hits. Gabriel Florentino replaced him and was even better, striking out the side in order in the sixth and allowing just one base runner in the seventh.

“The kids fought hard for sure,” said Carol City manager Anthony Ronco. “I think we struck out too much but sometimes the other team has a good pitcher and a pitcher who is on can change the whole game and makes it tough. Zion did a nice job but their guy was just a little bit better than ours today.” 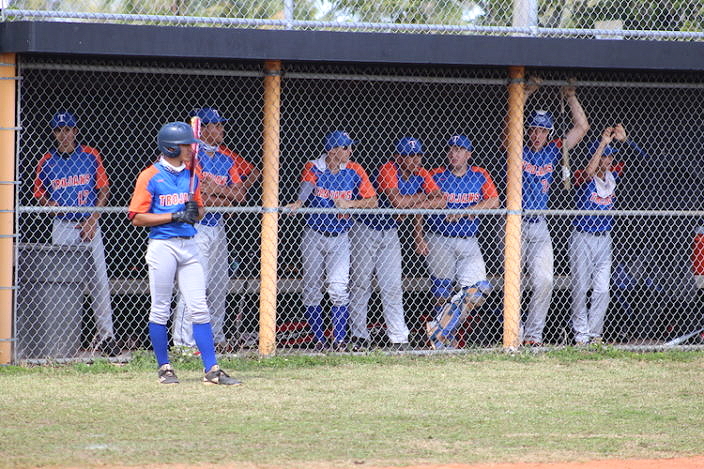 With football far and away having been the dominant sport at Carol City for as long as anyone can remember, building a baseball program has proved to be challenging for Ronco but he said he is encouraged by the results.

“It’s gotten a lot easier because of these kids, they’re a really great group,” said Ronco, now in his third year trying to bring the program along. “In the beginning it was hard because the kids I did have, they typically didn’t come from football and really didn’t come from anything. They just had no baseball experience at all so the standards were just very low.”

“What I found was that if we hold a standard, some of these kids will work to rise to that standard and I’ve got some kids who are really working to reach that. I feel like we’re going in the right direction, right now. We’re just trying to do it in small steps, one game at a time.”