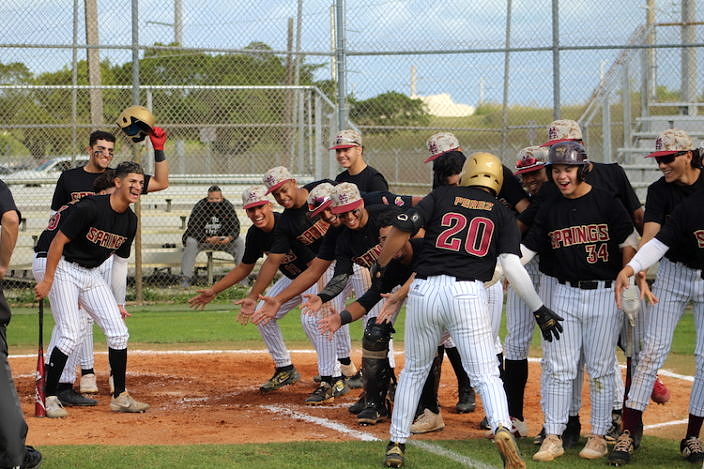 With some key injuries to their pitching staff, the start to the 2021 season was a slow one for the Miami Springs Golden Hawks.

But things are starting to get better and Monday afternoon’s 10-0 victory over Reagan at Shelly Dunkel Field on the Miami Springs campus exemplified that.

Not only did the Hawks, thanks to junior sensation and University of Miami commit Jason Torres, deliver the goods on offense, but manager David Fanshawe got a nice outing from a pair of pitchers as well.

Saul Arauz pitched three innings and Jonathon Alorda came in to toss the fourth and fifth as the two combined for a two-hit shutout, facing just 17 batters, two over the minimum.

Torres showed why the Hurricanes have already offered him, as he not only hit his third home run of the young season, but it was a tape measure shot well over the 335 sign in left center. It came with the bases loaded in the bottom of the second, staking the Hawks to a 5-0 lead.

“I think that’s my first time hitting a grand slam in high school,” said Torres who, as a freshman two years ago, hit the most dramatic home run in the history of the program, a walk-off shot in the last of the seventh to stun nationally-ranked Plantation American Heritage in a regional final and send the Hawks to the state final four for the first time. “I was looking for something up and got it, a fastball. It felt great as soon as it left the bat.”

Springs wasn’t done in the inning as Jordan Perez came up a few batters later and also bombed one over the left field fence. When the inning was done, the Golden Hawks had sent a dozen batters to the plate and scored eight runs for a 9-0 lead.

Still 9-0 in the last of the fifth, Torres came up with runners on second and third and one out when he laced a shot into the gap in left center that. Normally it would’ve been a 2-RBI double but, when the runner on third crossed the plate, the game was officially over so Torres had to settle for a 2-for-3 day with five RBI’s giving him a county-leading 23 for the season thus far. 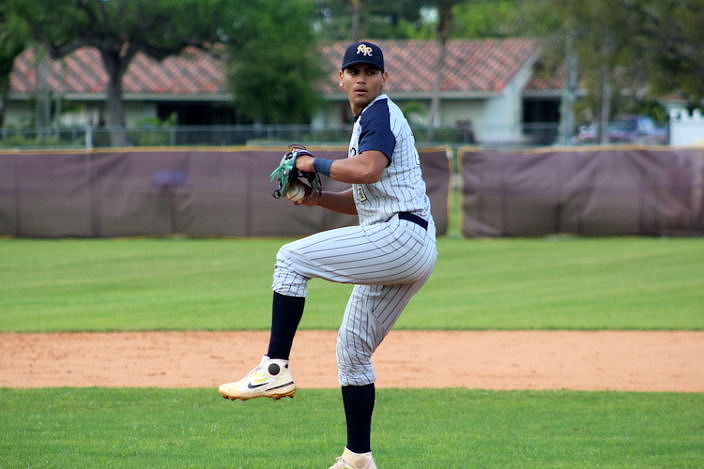 Despite first inning struggles, Reagan pitcher Gabriel Vargas was still a welcome sight to see back on the mound on Monday as he returned for the first time after having Tommy John surgery a year ago.

“I’m glad we’re heating up,” said Torres who came into the game hitting .565 on the season. “Things have been a little bit of a struggle for us early on. We lost some arms so we’re just trying to make up for it on the offensive end. Today we did a good job of that and got some nice innings from our pitchers as well. The goal isn’t to necessarily be winning a bunch of games at the start of the season, it’s to be playing at our best and winning games at the end of the regular season and playoffs.”

Torres referred to a pair of Springs starting pitchers including ace Christian Olazabal who has suffered from some elbow pain and has yet to able to take the mound this season. In addition, the team’s No. 2, Danny Fernandez has also been out with a broken hand but is due back next week according to Fanshawe.

“We definitely started off slow this year but today Saul (Arauz) and Jon (Alorda) gave us a good effort and Jason got us going with the grand slam that allowed us to breathe a little bit and it snowballed for us from there. We haven’t been playing terribly, it just gets to the point that if you start losing arms, it puts a strain on everything else.”

Case in point came last week when the Springs bats had another explosion, scoring 17 runs against South Dade. Problem was the Hawks gave up 18 and lost the game.

“Last week tells you what you need to know,” said Fanshawe. “You score 17 runs and don’t win the game. We’ve got Florida Christian here on Thursday and then Flanagan next week and we’re getting one of our arms (Fernandez) back next week so we’ll need to be ready to go when the bell rings.”

After three straight one-run losses, there would be no one-run defeat for Reagan on this day as the Bison fell to 3-6. But, despite the lopsided loss, there was a feel-good story for the team on this day.

That’s because, a little over a year after having Tommy John surgery, it marked the first time Bison pitcher Gabriel Vargas returned to the mound. 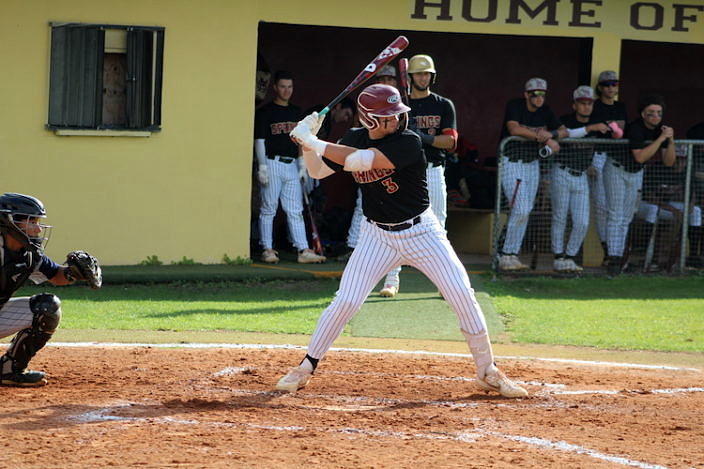 University of Miami commit Jason Torres gets ready to launch the next pitch over the left field fence for a second inning grand slam against Reagan.

With manager Rafael Mesa keeping him on a strict pitch count of 40, it was still a little big of a struggle for Vargas.

“I’m dying to see him get back at his best so today was a big step in at least getting him back on the mound,” said Mesa. “Even though it was a struggle for him, it was still good to see him out there throwing on the mound after everything that he’s been through. We obviously need to be very careful with him so this will be a gradual process going forward and Gabe understands that. He is a very big part of this team and the hope is that by the end of the season, he’ll be at full strength and be able to assume the role as our No. 1 out there.”

Vargas walked two and hit a batter in the first inning (giving up one run) before walking the first two batters in the second before Mesa came and got him. But the fact that he was back out on the mound after a long battle of rehabbing was a positive sign in itself for the Bison.

“It’s been a long journey for sure and I’ll admit that I was a little anxious and nervous out there today,” said Vargas. “Unfortunately I struggled a little more than I would’ve liked but I understand that this is something that is going to be a slow process for me because coach wants to be careful. I knew about the pitch count going in and I know it will be baby steps from this point on. Maybe two innings next time, then three and so on. Hopefully, if all goes well, I’ll be at full strength by the end of the season.”