Doral And Hialeah Roll To Big Wins, Advance To 6A-16 Final 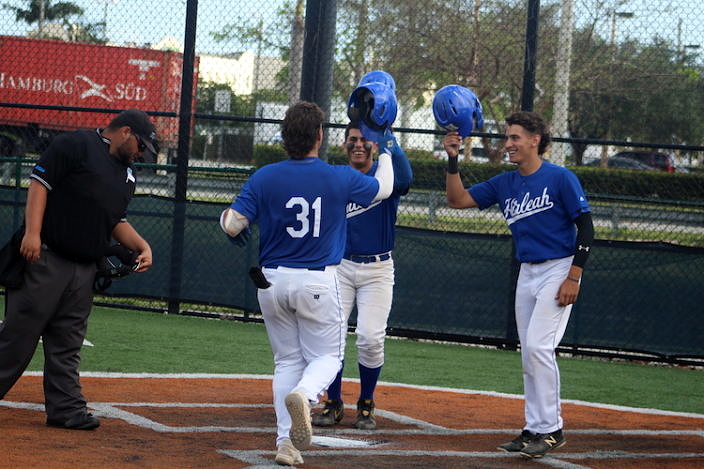 Hialeah’s Jorge Barba is greeted at home plate by his teammates following his three-run homer in the second inning.

Both Doral Academy and Hialeah entered Wednesday afternoon’s 6A-16 semifinals at Doral’s Doug Rodriguez Field as prohibitive favorites over their opponents and on course to meet in Friday’s championship game.

The Firebirds and T-Breds delivered as promised. Doral easily disposed of Miami Beach by a 16-0 final in a contest that ended after four innings while Hialeah, led by their starting ace pitcher and FIU commit Ervis Solis, cruised past South Miami 7-0.

Doral and Hialeah, who met once during the regular season back on March 12 with Doral prevailing 7-0, will now meet in the 6A-16 final on Friday at 4 p.m. with a district championship trophy on the line. Regardless of the outcome, both teams will advance to next week’s regional round.

Solis was dominant from the start as he took the mound for Hialeah and retired nine of the first 10 South Miami batters and would wind up going five innings giving up just two hits and one walk while striking out eight.

Luis Estrada took it from there entering in the sixth and retiring the side in order in the final two innings to complete the combined two-hitter.

Solis got all the offense he needed in the first two innings as the T-Breds plated a pair of runs in the first inning thanks to RBI singles by Lazaro Hernandez Jr. and Jason Ramos before playing a little long ball in the second. 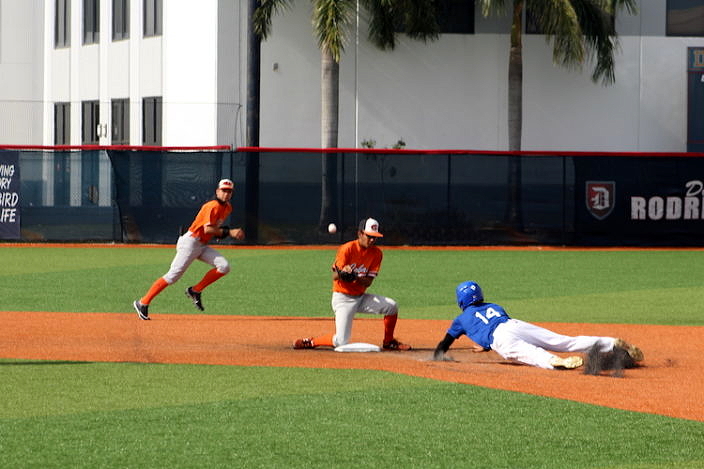 Hialeah’s Leo Perez slides in safely at second for a third inning stolen base as South Miami’s Franco Sosa awaits the throw.

After South Miami starter Johan Feliz recorded the first two outs of the inning, lefty Herick Hernandez stepped up and blasted a high drive over the high net in right center for a solo home run.

But the T-Breds weren’t done. After Lazaro Hernandez drew a walk and Leo Perez singled, third baseman Jorge Barba took Feliz’s second pitch and hit a towering drive high over the fence in left center for a three run homer. Just like that, Solis and the T-Breds had a 6-0 lead and that was pretty much that.

“The thing was before the game, we talked about with Ervis to back him up early and get him the lead because we really didn’t really want to extend him if we didn’t have to,” said Hialeah manager Juan Garcia. “Let the bats come out early and get us in front and that’s exactly what happened.”

Once his team scored another run in the third and had the big seven run lead, the only real drama left was when to pull Solis out. If Solis came out having stayed under 45 pitches, he would’ve still been available for Friday’s Doral game. Garcia admitted that he flirted with the idea of not sending Solis out for the fourth inning (with his pitch count at 44) but didn’t want to get caught getting “too cute.”

“I won’t lie, as a coach you know you have to win the game and you don’t want to look back and regret making the move because it could come back to haunt you,” said Garcia whose team improved to 16-11. “The priority has to be to make absolutely sure you are moving on to the next round but I’ll admit that I was close to doing it. If we had gotten the lead to eight or nine going into the third inning I might’ve done it. But I have complete confidence in our arms behind Ervis as well as you saw what Luis (Estrada) do when he came in there.”

When Solis learned he wasn’t going out for the sixth inning, he didn’t flinch.

“I just go out and pitch and when coach comes to get me, I say thank you and hand the ball to somebody else,” said Solis. “Today I felt confident with my slider all day, that’s the one I was using to try and finish the hitters off.”

It was a rough year for the Cobras who finished their season 7-17 but manager Howard Cuervo was the first to give high praise to his opponent and the pitcher they faced while still remaining optimistic about the future of his program.

“Congrats to Hialeah, they had a really good arm out there today, his pitches were nasty and they hit the ball well,” said Cuervo. “We were thinking if we could keep the game close, maybe we could win it late but our starter struggled and they jumped all over us early. We were on a 6-0 hole before we knew what hit us so sometimes the game just doesn’t go your way. We have a lot of young guys and only two seniors so the hope is that they will learn from this.” 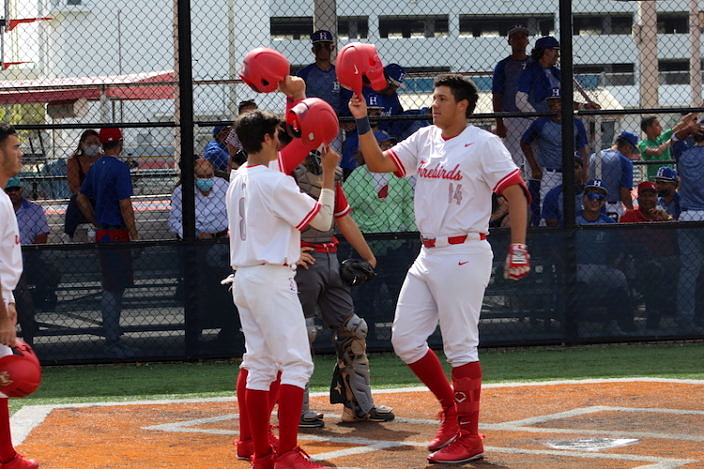 It was a big day for Doral Academy slugger Marcus Franco (14) who had three home runs. Here is is met by his teammates at home plate following his fourth inning grand slam which ended the game.

In the other semifinal, it was a power surge from Marcus Franco, with three home runs, that carried Doral.

Throughout his years growing up playing baseball on all levels, Franco said he had had many games in which he hit two runs. But never three.

But that breakthrough moment arrived on Wednesday when Franco cleared the fence three times to lead his Doral Academy Firebirds to their 16-0 win over Miami Beach and saw his team, ranked No. 3 in HSBN’s Miami-Dade power rankings, improve to 21-4-1.

After hitting a solo shot in a three-run first, Franco hit a three-run blast in a nine run second inning. He then finished things off in style when he stepped up with the bases loaded and two outs in the last of the fourth and launched another towering drive well over the fence in left center for a grand slam giving him a whopping 8 RBIs for the day and bringing an end to the game by virtue of the four-inning, 15-run rule.

“I’ve had two in one game a few times but never three,” said Franco who is committed to Nova Southeastern University and now has nine homers on the year. “I don’t know I guess the ball just looked like a grapefruit coming at me today because they gave me pitches I could handle. That last one I really got some good bat on it. Hopefully we keep on winning and take this thing all the way to Fort Myers.”