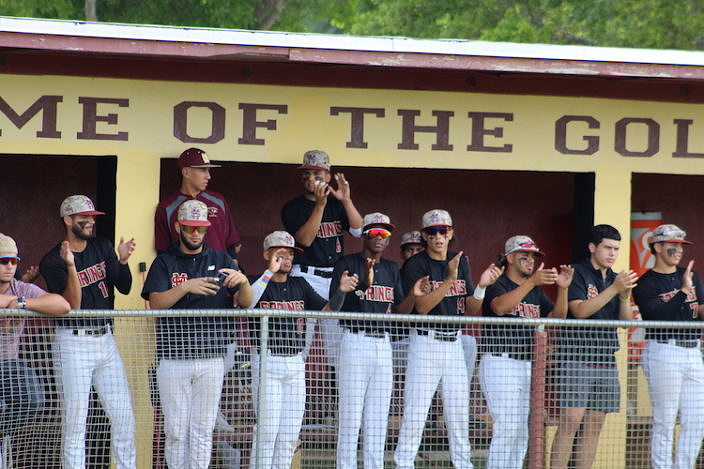 So Tuesday afternoon’s 4A-16 semifinal showdown with Key West probably served as a perfect microcosm of the season.

The Hawks jumped out to an early three run lead, saw the proverbial roof collapse, falling behind, only to rally and come out on top as they outlasted the Conchs to win it 10-7 at Springs’ Shelly Dunkel Field.

The No. 2 seeded Hawks (11-10) lived to see another day as they advanced to Friday’s 16-4A championship game against either Sunset or top-seeded St. Brendan at 3:30 p.m.

Key West, which was a team much better than its record would lead you to believe coming in and had won its last four games including back-to-back conquests of Gulliver and Westminster Christian, finished 7-16.

Trailing 7-5 in the last of the fifth, Springs was down to its last seven outs when the Hawks came through with the ultimate two-out rally with two hits, a walk, a hit batsman and two more hits. When the dust settled, they had plated five runs to turn a two-run deficit into a three run lead.

After Springs starter Saul Arauz and reliever Jesus Gonzalez both struggled, Danny Fernandez came on with two outs in the fifth and managed to record the final seven outs without giving up a run.

“Our guys definitely showed some leadership today and battled back,” said Springs Manager David Fanshawe. “Coming back the way we did is something that we haven’t really done all year. The kids, they didn’t want to go home. They wanted to practice tomorrow and play again Friday so they went out and took it.”

With Keyber Delgado, who had drawn a one-out walk, on first with two outs, the Hawks reached the top of their lineup in that big fifth inning as Abdriel Delgado got things going when he doubled to right center putting runners on second and third. Jordan Perez then singled to left scoring Delgado from third leaving runners on the corners. 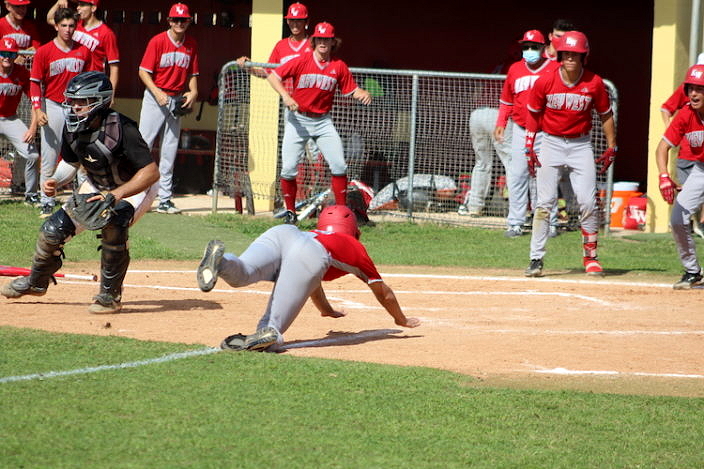 With his teammates rooting him on, Key West’s slides home safe to complete his team’s 5-run fourth inning rally.

It was here that Key West manager Ralph Henriquez showed the ultimate amount of respect for Springs slugger and University of Miami commit Jason Torres.

Unfortunately it backfired when Conch starter Michael Alfonso, who was approaching 100 pitches and starting to tire in the mid-afternoon heat, hit Jaliesky Garcia to force in a run tying the game. Christian Olazabal then laced a base hit up the middle to center scoring two more to put the Hawks up 9-7. Jonathan Alorda then came through with another RBI single to left to complete the rally.

“Something like today is something we’ve been waiting for the whole year,” said Delgado who finished his day 2-for-3 at the plate. “We haven’t had much of it and things have been a real struggle at times. Today’s energy was off the charts, it was amazing. We didn’t want this thing to end and if we play like this every game I don’t think anybody can beat us.”

Like so many others, Fanshawe wasn’t fooled by Key West’s record as well and, with the two teams having not played each other this season, had warned his players.

“We knew last week that we were going to match up with them so we came in today completely ignoring their record because we knew they were a much better team than that record showed, especially when they beat Gulliver and Westminster back-to-back,” said Fanshawe. “That got our attention and we knew today would be a challenge. Key West is a program with a lot of tradition, they play a lot of good teams on the road so knew we’d have to scrap.”

Trailing 3-0 after two innings, Key West players didn’t flinch. The Conchs scored one in the third and then dropped a five spot on the Hawks in the fourth, the big hit being a bases-loaded 3-RBI double down the left field line by Logan Pellicier, to go up 6-3. 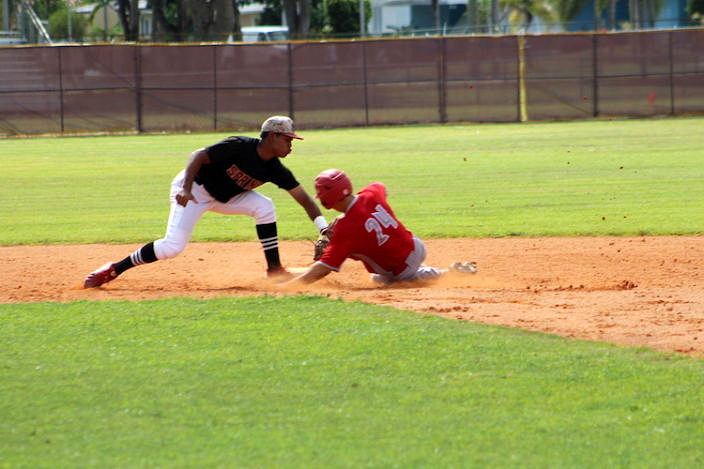 After Springs scored two in the bottom of the inning, the Conchs scored one more in the fifth, Preston Herce scoring from second on a throwing error, to go up 7-5 setting the stage for the Springs rally.

“A really tough one today,” said Henriquez. “We fought back and got the lead and things looked good and Michael (Alfonso) was really getting it done on the mound. But it was hot and eventually he wore down and hats off to Springs, they’re a good ball club, they’ve been in these situations before and they responded today.”

Henriquez, who took over the program in 1994 and has led the Conchs to four of their 11 state titles (most in the state), the last coming in 2005, said that his roster is young and that’s why his team got off to a slow start.

“We’re a good young group and we were really coming on there late in the season,” said Henriquez. “A very slow start but we kind of expected that with the lack of experience at the varsity level. But there is still an expectation to play at a certain level at Key West High School and these kids took awhile to get to that point but I think they understand now what it is to play at that level. Hopefully next year we will have a lot of young returning guys that will have that varsity experience that will be valuable to them and build off experiences like today.”