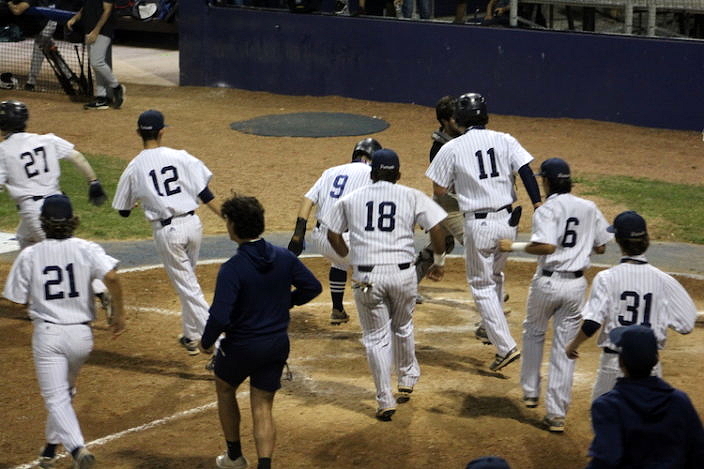 Florida Christian’s Henry Fernandez (9) steps on home plate and is mobbed by his teammates following a bases loaded walk in the last of the seventh that ended the game.

Whoever thinks a walk isn’t as good as a hit should’ve been at Florida Christian on Monday night.

Locked in a 1-1 tie with LaSalle in the bottom of the seventh in a do-or-die District 15-3A quarterfinal contest, the Patriots never even made contact with the ball. And won the game anyway.

That’s because they did a great job of drawing bases on balls, four of them to be exact, including the final one by Javier Gorostola with the bases loaded that allowed Henry Fernandez to trot home with the winning walk-off run as Florida Christian edged LaSalle 2-1 at Patriots Field.

The win kept the season alive for the No. 4 seeded Patriots (11013), who advanced to the District 15-3A semifinals. They will travel south to take on top seeded Westminster Christian, HSBN’s No. 5 ranked team in Miami-Dade County, on Tuesday at 4 P.M.

“Nothing is ever easy once you reach the postseason and our kids found that out again tonight,” said Florida Christian manager Alex Brigman. “We’ll take it, whatever way we can get it. Just to live another day in the playoffs. You take it and move on.”

The final result was also justice for Florida Christian pitcher Robert Rodriguez. Rodriguez was nothing short of brilliant all night as he was one strike away from taking a no-hitter to the seventh inning before giving up a hit, and he threw his final of 105 pitches in the top of the seventh when he retired the side in order.

Having maxed out on pitches, he was never going to come out for an eighth inning, meaning the Patriots had to score in the seventh in order for him to get the win.

“My curveball was really on command and I felt like I was keeping my fast ball low in the zone most of the time and my changeup was on as well,” said Rodriguez who finished his complete game masterpiece giving up just one hit and three walks while striking out nine. “I just focused on doing the job out there and doing the best I could for my teammates and I’m just glad we were able to find a way to win.” 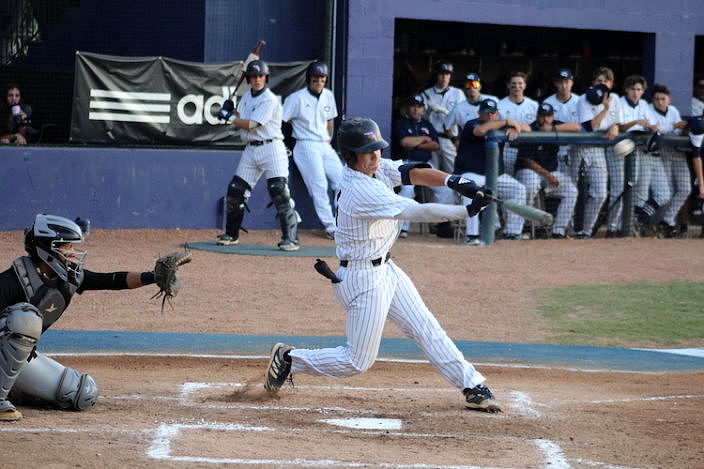 Florida Christian’s Javier Gorostola rips a shot to the center field fence for a first-inning triple.

Rodriguez cruised into the sixth having given up just the three walks and was nursing a 1-0 lead. With Manny Oquendo on first (having reached on a catcher’s interference call when his bat hit the catcher’s glove) and two outs, Rodriguez had a 1-2 count on Sebastian Paz, when Paz drilled a shot to right center.

The ball rolled all the way fence of the farthest point in the park, as Oquendo came all the way around to score and Paz slid into third with an RBI triple, tying the game.

“I had been keeping my fastball down all night but made a mistake there and left it up and he got a good bat on it,” said Rodriguez. “It was my only mistake of the night and he made me pay for it.”

Then came the last of the seventh and, after Niko Fernandez grounded out to shortstop to start the inning, Henry Fernandez, Keanu Rodriguez and Jacob Brigman drew three consecutive walks to load the bases.

It was then that LaSalle Manager Nathan Gomez finally came and got Royal Lions starter Dominic Sorondo from the mound. Sorondo had been nearly as brilliant as Rodriguez all night long, scattering five hits and yielding just one run. 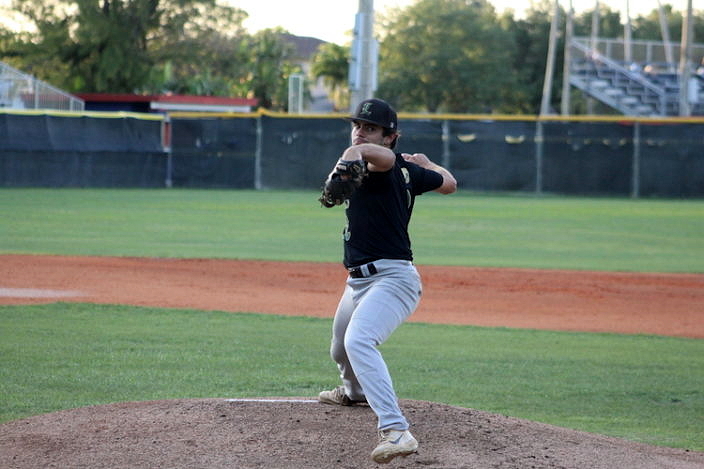 LaSalle starter Dominic Sorondo pitched well all night, keeping his team in the game until the final inning.

The battery then literally flip-flopped, as LaSalle catcher Anthony Castillo then took the mound, while Sorondo put on the catcher’s gear and went behind the dish. It only lasted for one batter, as Gorostola came up to the plate and quickly worked the count to 2-0. When Castillo delivered a 3-2 pitch down and away, Gorostola laid off it for ball four and the game was over.

“See ball, react to ball. That’s what we’re taught,” said Gorostola. “If I draw the walk, it’s the same thing as if I had hit a grand slam over the fence. That 3-2 pitch he threw me a curve ball and I knew it was down and low when it was coming. It’s a great feeling to get a win and live to see another day.”

While he would’ve loved to have seen more offense as the Pats managed just five hits Monday night, Brigman was pleased with how things turned out.

“We may not have hit it anywhere but we showed great discipline at the plate in that last inning,” said Brigman whose team improved to 11-13. “Hitting prep and identifying pitches, all the things that we talk about doing we did and it paid off. Javi (Gorostola) was definitely the kid you wanted up in that spot with the game on the line. A great job of working the count.”

The Patriots plated their only other run of the night in the last of the fourth when, with two outs and Martin Gomez on second, Giancarlo Chantres drilled a base hit up the middle scoring Gomez.

“If you’re going to go out, that’s the way you want to go out, competing the way we did out there tonight,” said Gomez whose LaSalle team dealt with a major late-season COVID-19 disruption and finished its season 9-8. “I can’t be more proud of our kids for the effort they turned in tonight, especially Dominic. He was absolutely amazing and you couldn’t ask any more from a kid. He had hit his pitch count and was gassed there at the end so he took it as long as he could.” 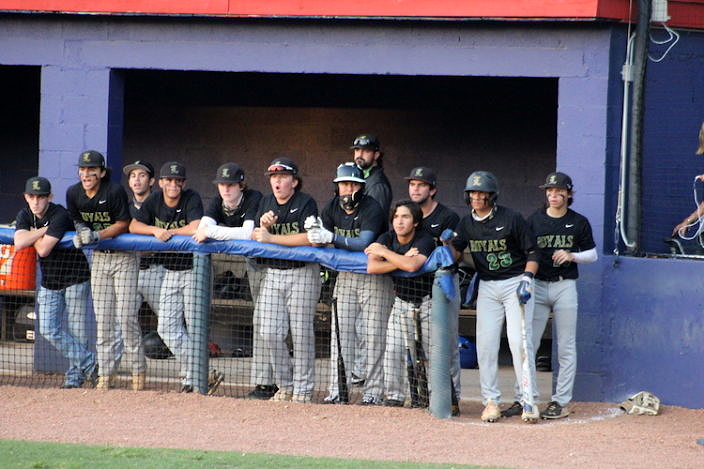 Like many other teams this season, Gomez’s Royal Lions also had to deal with disruption and shutdown from COVID-19 protocol. But unfortunately, their’s came late in the season, meaning they may not have been as sharp heading into the postseason.

“A tough stretch there towards the end,” said Gomez. “We weren’t together for two weeks going into our final game of the season and actually went in to our senior night without having had a single practice and still had a couple guys out until they finally got negative tests yesterday. I’ve got to give it up to these kids. To not have any kind of practice for half a month and be able to compete the way they did tonight, you can’t help but be proud of them.”