Goleman Hangs On To Top South Broward For 6A-15 Title 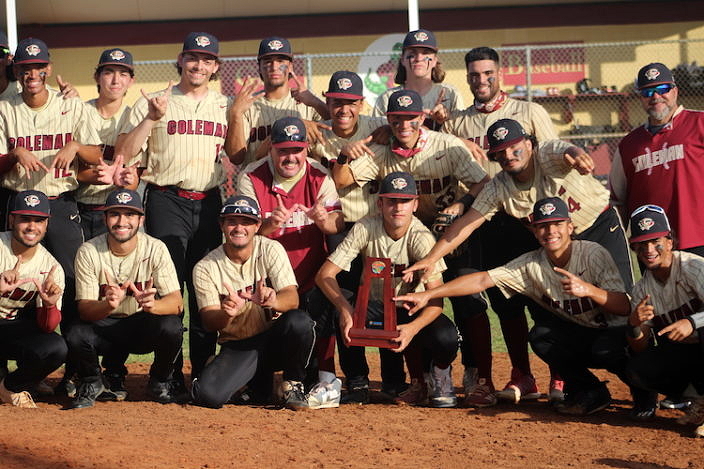 Winning district titles has come often for the Goleman Gators and they notched another trophy on Thursday.

Was he out? Or was he safe?

Controversy reigned supreme on Thursday afternoon when South Broward and Goleman squared off in the 6A-15 championship game at Goleman High School.

And for a few minutes, nobody was sure whether or not South Broward runner Luke Valenchis, with his team trailing by two in the top of the sixth, was actually out or safe at home after trying to score from third on a wild pitch.

At first the call was out, then quickly changed to safe. Then, after all three umpires huddled up, it was eventually reversed back to “out” again.

It was a swing moment in the game and ultimately played a big part in the Gators holding on to their two run lead as they wound up defeating the Bulldogs 3-1 to capture the 6A-15 title, their fourth district championship in the last seven years.

The win moved Goleman above the .500 mark at 11-10-1 and the Gators will now host 6A-16 runner-up Hialeah in a regional quarterfinal matchup next Friday, May 7 at 4 p.m. The Bulldogs (12-12) will travel back to Miami-Dade County to take on Doral on the same day and time.

Having barely been able to touch Goleman starter Jordan Vargas all game long, South Broward finally got its opening in the sixth when, with one out, Valenchis and Jacob Laroque managed back-to-back infield singles and then moved up to second and third on a wild pitch.

With catcher Will Hall up at the plate, Vargas’ second pitch was in the dirt and got away from Goleman catcher Sammy Hernandez sending Valenchis charging home. But not far enough that Hernandez wasn’t able to retrieve the ball and dive back at home plate where he reached Valenchis in time to apply the tag and get an immediate out call from the home plate umpire.

But when the umpire spotted the ball on the ground, he immediately changed his call to safe meaning the Bulldogs now were down by just one and the tying run in the form of Laroque was standing just 90 feet away with only one out.

But Goleman manager Jose Lopez immediately jumped up and came out to make his case that the ball had only dropped to the ground when Hernandez tried to transfer the ball from glove to hand to show the umpire that he had it. 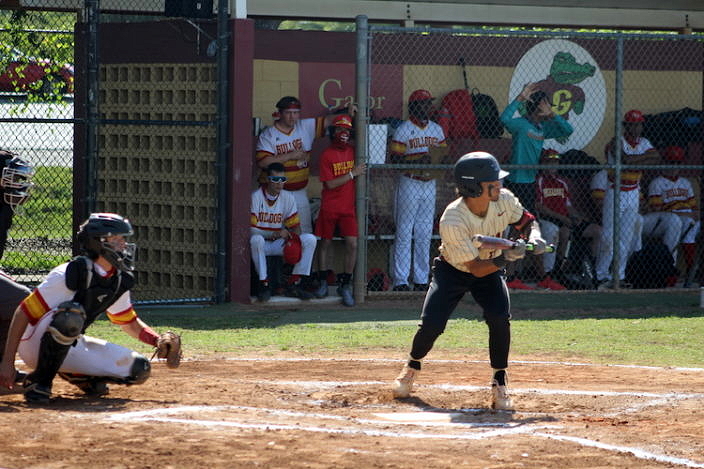 Apparently with a better angle, the two base umpires agreed with Lopez and Valenchis was called out. South Broward manager Darin Koch was beside himself and argued for several minutes but to no avail. Two pitches later, Hall grounded out to second for the final out and the Bulldogs were a deflated bunch.

“I was sure that after Sammy tagged him, he went to show the ball to the umpire and on the transfer the ball fell out of his glove but the home plate umpire didn’t have the angle to see that and only saw the ball on the ground,” said Lopez. “But I wanted to bring the other base umpires in because they might have had a better angle to see what happened and fortunately they saw what I saw.”

“I thought Luke beat the play home to begin with but I didn’t have a good angle on it so I’ll defer to the home plate umpire’s judgement on that,” said Koch. “But then the ball comes out and I see him call safe after he had initially called out so it’s all good. The next thing you know, the other umpires come in and…..well maybe I shouldn’t get into this, let’s just not go there. It changed everything in that inning.”

Vargas, who had dominated all day with his high velocity fast balls then mowed them down by striking out the side in order in the top of the seventh to end the game. He finished his complete game masterpiece having yielded just three hits while striking out 14 and never walked a batter.

“I felt good from the moment I took the mound and knew I had my defense behind me as well,” said Vargas, just a sophomore. “Fast balls, fast balls, fast balls, I just kept bringing it in because they really couldn’t get around on it so I wasn’t going to mess with what was working. Every once in awhile I would drop a curve ball or off speed in there just to keep them honest.”

His team got him the only runs who would need in the very first inning when, after James Hernandez was hit by a pitch with one out, Brandon Olivera stepped up and hit a deep shot over the fence in left center off Bulldog starter David Mayorga.

“There was a hit-and-run on so I was just sitting back trying to hit something the other way,” said Olivera. “But he hung a change up so I got in front of it and hit it out.”

It turned out to be Mayorga’s only real mistake of the day as he pitched nearly as well as Vargas. South Broward managed its only run off Vargas in the top of the fourth small-ball style. After Valenchis reached on an error to start the inning and stole second, he went to third on a groundout to second by Laroque and then scored when Hall grounded to second as well.

But the Gators answered that run in the bottom of the inning when Matt Gomez led off with a base hit to right, went to second on a wild pitch and scored on an Anthony Lopez double to left center.

“I’ve won a few of these and lost a few so today was really a terrific effort by the kids, especially Jordan who was outstanding out there and was in control of things the whole way,” said Lopez. “Give a lot of credit to South Broward as well, we ran in to a really good arm today on their side as well but Brandon got the big blast early and it held up.” 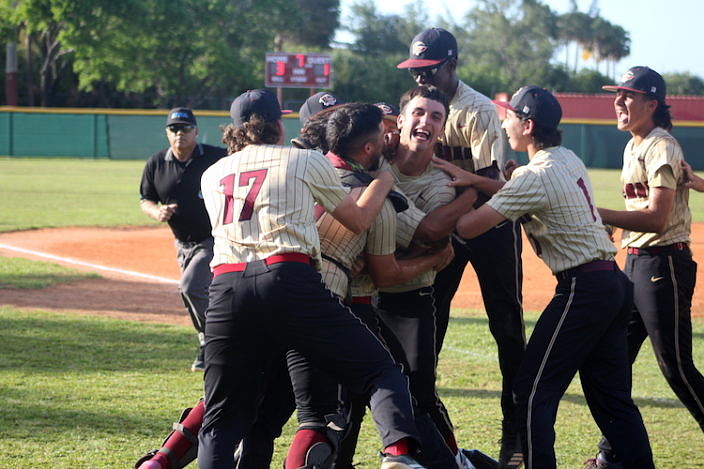 Goleman players celebrate their district championship over South Broward after the last out was recorded.

As big a challenge as it was for the Bulldogs, things became even tougher after they had to play the game with heavy hearts. That after leadoff hitter Tyler Ochs, on the second pitch of the game, was struck just under his left eye by a Vargas inside fast ball. Ochs went to the ground and was immediately tended to by medical staff. The game was stopped for 20 minutes while Fire Rescue was called. Eventually he walked off to the rescue truck under his own power but was transferred to Memorial West Hospital for observation.

“It was a very difficult and frightening moment for everybody,” said Koch. “I myself was wondering if I really wanted to be here after it happened so I’m sure some of our kids had the same thought. Tyler is in our thoughts and prayers right now.”