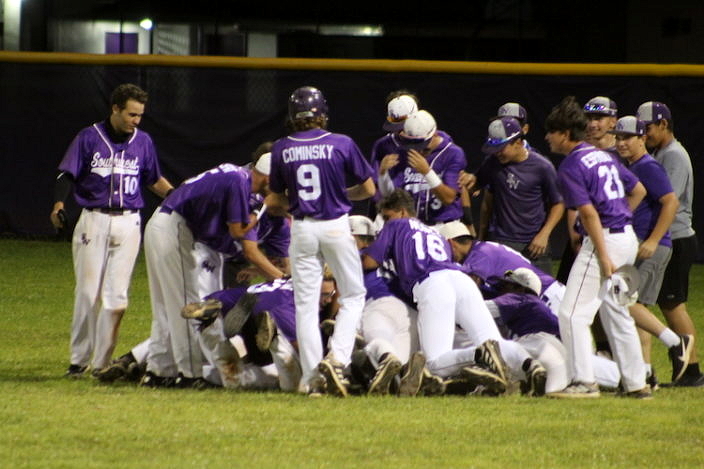 It was dog pile time for the Southwest players following a Diego Santos game-winning walk-off single in the last of the eighth.

It was high school baseball at its finest on Tuesday night as Coral Gables and Southwest put on quite a show.

When it was over, it was Southwest players taking off into center field to do the celebratory dog pile. That following a dramatic 3-2 extra inning victory over the Cavaliers that saw them rally for two in the last of the seventh to score twice and tie it, in a 7A-15 semifinal at Southwest High School.

The second-seeded Eagles improved to 13-9 on the season and advance to the 7A-15 championship game where they will square off with top-seeded Columbus on Thursday at 6 p.m. at Southwest. The Explorers, No. 4 in HSBN’s Miami-Dade County power rankings, improved to 23-4 with a 7-0 shutout of Coral Park in the earlier semifinal.

While there were plenty of heroes for Southwest on this night, ultimately it was a pair of freshmen who decided it as Joel Cabrera led off the last of eighth with a towering double off the left field fence (that nearly went out) and then scored one out later when fellow freshman Diego Santos laced a shot to left center.

“I got an outside fast ball and just drove it,” said Santos who took over early in the season as the team’s catcher. “I wasn’t really nervous or anything, I just wanted to try and make contact with the ball. It feels great to be able to help my team anyway I can.” 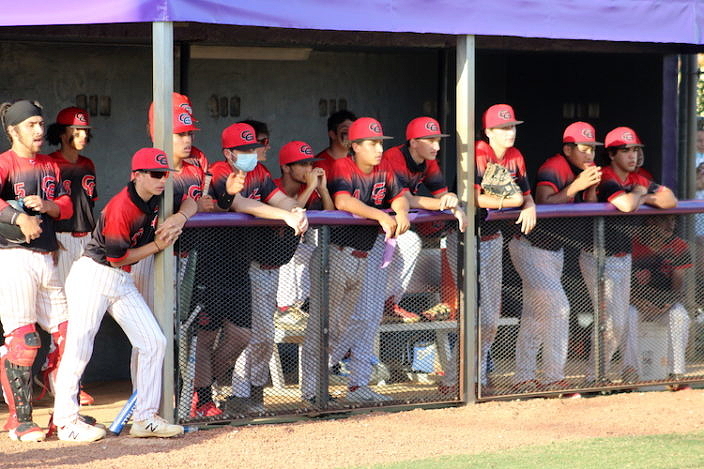 Cabrera was playing in left field and was determined to make up for a second inning error that allowed the Cavaliers to plate an unearned run to grab an early 1-0 lead.

“It was a 1-2 count, he threw me inside and I manned up, turned on it and lined it down the line,” said Cabrera. “I thought it might get out but I just hustled down to second. As soon as the ball left Diego’s bat, I knew it was in the gap and I just took off running. Nothing was going to stop me until I crossed home plate.”

None of the heroics from the two ninth graders would’ve even happened had it not been for the Eagles’ dramatic two-run rally in the seventh that sent the game to extras. Especially since they had been completely stymied by Gables starter Johnny Quintana all night as they had just one hit through six innings and just three baserunners.

But when Santos led off the inning with a solid liner to right for a base hit, the Southwest dugout came to life.

But it looked like Quintana would put any kind of fire out after he struck out J.J. Cominskey and then had leadoff hitter Chris Alvarez in a 1-2 hole. Then came the key moment when Quintana fired a fast ball that caught Alvarez looking and appeared to be strike three as the Gables dugout jumped up.

But the call instead was ball two. One pitch later, Alvarez took advantage of his second chance when he drilled an opposite field shot to the right field fence for a double putting runners on second and third with only one out.

After Javier Hernandez got hit by a pitch loading the bases, Evan Padron hit a ground ball to the right of first base that the Gables first baseman could not handle scoring a run and leaving the bases loaded. 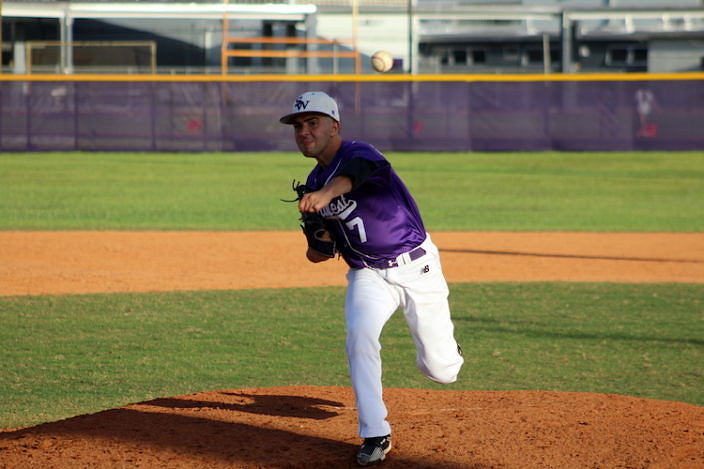 That was the end for a frustrated Quintana who had reached his max pitch count and in came reliever Jose Medrano who faced SW right fielder Alberto Rigual. When Rigual sent a fly ball to shallow right field, the question was was it deep enough to score Alvarez who was ready to tag at third.

Alvarez initially was going to hold but when the Gables second baseman and right fielder got tangled up catching the ball, Eagles manager Mandy Peleaz sent him home and Alvarez barely beat the throw at the plate tying the game.

“It’s tough to play here at night and we thought they might’ve lost it in the lights,” said Peleaz. “Initially I told Chris ‘fake it’ but when I saw the two of them get tangled up I shouted ‘GO.’ Chris is our sparkplug and he came up big right there. What a great high school baseball game tonight, credit our kids for battling right down to the end and how special is it to see two freshmen answer the bell the way Joel and Diego did.”

On the flip side was Gables head coach Ernie Padron and his distraught players, many who were inconsolable. Padron, a seasoned veteran who led Florida Christian to back-to-back state titles in 2004/05, himself was emotional and barely able to speak after the game.

“This one really hurts, as tough a loss as I’ve had,” said Padron whose team finished 11-12. “So much going on this week, dealing with D.J.’s death, (Padron was very close to head Miami-Dade County umpire D.J. Breighner who passed away unexpectedly last week) and things that life brings to us. There was COVID and everything else, so it’s just been so tough and these kids deserved better than what they got tonight. Credit Coach Peleaz and his kids. So well-coached, they battled and never quit so hats off to them.”