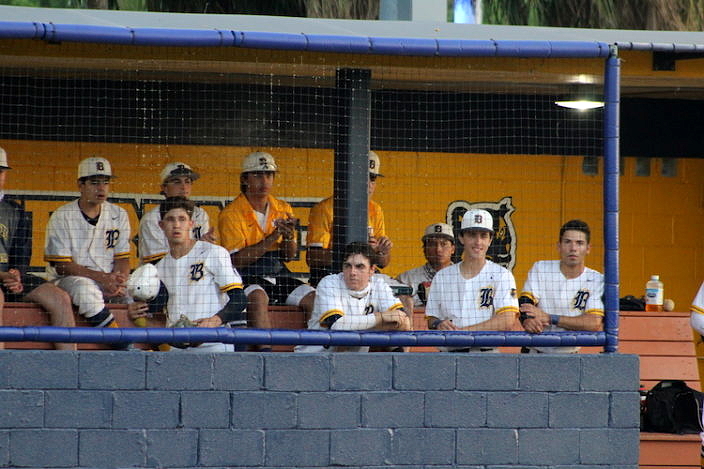 A night that was supposed to include a large, noisy, vociferous crowd on both sides (and at times contentious) accompanied by high intensity baseball filled with plenty of drama that just might come down to the last pitch checked off all of those boxes on Tuesday night when Belen Jesuit hosted Archbishop McCarthy.

In the end, it was McCarthy, after building an early 5-0 lead, that wound up hanging on for a 6-5 victory over the Wolverines in a Region 4-5A semifinal at Belen.

The Mavericks, ranked No. 8 in HSBN’s Broward County power rankings, improved to 19-8-2 and advance to their first regional final since they last won a state title in 2017. McCarthy will host Eau Gallie, which defeated South Fork in the opposite semifinal, on Wednesday, May 19 at 7 p.m.

“We knew coming in what kind of intense atmosphere we were going to be dealing with tonight and our kids responded,” said McCarthy manager Aaron Vorachek. “Our kids have busted their tails all year and I told them from the beginning that it was going to be a process. We were 8-7-2 17 games into this season and are now 11-1 in our last 12 games so it tells you how they’ve bought in to this process. These guys don’t want it to end.”

Trailing 6-4 and down to their last two outs in the bottom of the seventh, the Wolverines refused to go quietly. After reliever Zaid Diaz issued a one-out walk to Jorge DeGoti, he struck out No. 3 hitter Gio Cueto and Belen was officially down to its last out.

That’s when disaster struck for the Mavericks when Diaz, on his first pitch to the next batter Dorian Gonzalez, felt something pop in his arm and had to come out. Thrust right into the middle of the frying pan to try and close things out and keep his team’s season going was little-used sophomore Nicolas Gutierrez-Villa.

Things didn’t get better for the Mavs when Gonzalez then ripped a shot just inches inside the right field line down into the corner scoring DeGoti and leaving Gonzalez as the tying run at second. With the Belen dugout and the Wolverines crowd in a frenzy, Jack Sampedro stepped up to the plate and hit a 1-2 pitch right on the button to deep center. But center fielder Jack Cue managed to flag it down to end the game.

“I was just trying to stay calm and throw strikes,” said Gutierrez-Villa. “I gave him two sliders including one on that last pitch. I knew I had good defense behind me and knew I had to pick up Zaid (Diaz) after he got hurt. I know he wanted to get that last out so I had to find a way to shut it down and get it for him.” 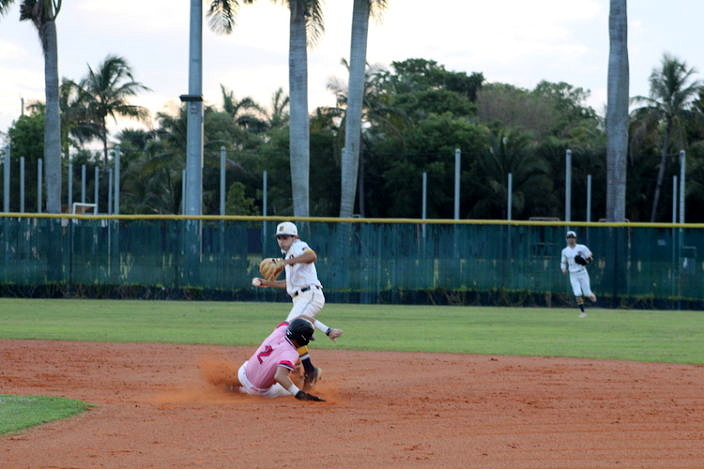 The Mavericks jumped all over Belen starter Esteban Rodriguez by sending eight batters to the plate in the first inning and scoring twice when Cue drew a bases loaded walk and Jake Alfaro delivered an RBI single to left.

After Rodriguez gave way to Andres Bello after two innings, McCarthy’s Adrian Vega, after Alfaro drew a one-out walk, greeted Bello with a high drive over the left field fence to a two-run homer and 4-0 lead.

“I was just focused,” said Vega. “I had two strikes on me and had struck out the at-bat before so I just choked up and thought ‘just find a way to put this in play and make something happen.’ I got a good piece of it and it went pretty high and I think the wind helped it out a little bit but it got out. My first home run of the year and it couldn’t have come at a better time.”

Meanwhile, McCarthy ace Andrew Ildefonso cruised through the first three innings and when he helped himself out by bringing in Antonio Jimenez from third on a tag up after a sacrifice fly in the top of the fourth, he enjoyed a 5-0 lead and the Mavericks were in great shape.

That was until the bottom of the inning when the Wolverines came storming back by scoring four times thanks in part to RBI singles from pinch hitter Chris Bayo and No. 9 hitter Ryan Cainzos and an RBI sac fly by Andres Gutierrez. A fourth run came in on a two-out throwing error at shortstop and suddenly the game was razor close.

“I’d be lying if I didn’t say I was thinking about going to get Andrew and just might have had my No. 2 (Vega) been available to me,” said Vorachek. “But because we had two rainouts last week and didn’t play Killian until Saturday, he didn’t have enough rest days and wasn’t available to us tonight. But Andrew is tough as nails and one of the leaders of this time and managed to fight his way out of it.” 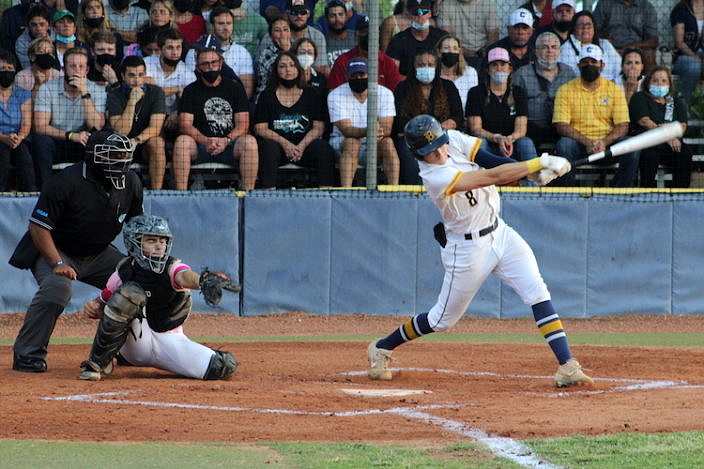 McCarthy offset the Belen momentum when Cue led off the fifth with a double to the left field corner and came home on an base hit to left by Alfaro to make it 6-4 which, as it turned out, was the game-deciding run.

Then there was the other side of the coin as Belen players were nearly inconsolable when the game was over, many sprawled out on the outfield grass as manager Jerry Albert tried to come up with any kind of words of consolation.

“This stinks. It’s just horrible to lose like this, a horrible feeling,” said Albert whose team was ranked No. 8 in HSBN’s Miami-Dade power rankings and finished the season 19-10. “We had a really great group of kids, very successful season, won a couple of really big tournaments and won our district. We expected to….we knew we had some tough games along the way but our goal was to take it one game at a time all the way to the end. I’m really proud of the kids the way they fought back tonight. They’ve been like this since we’ve had them.”