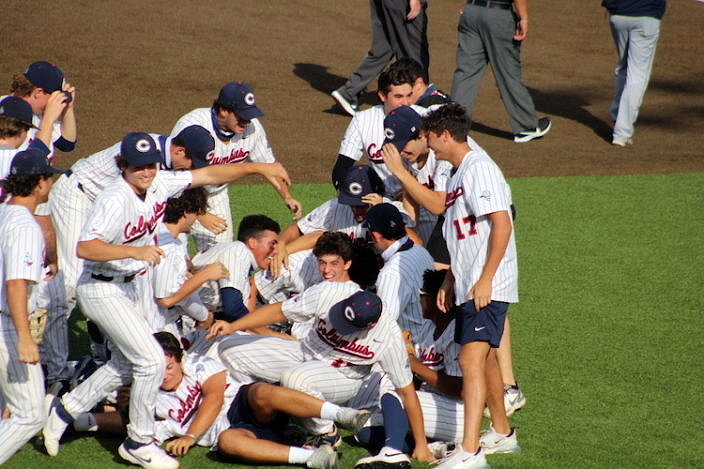 It was “dog pile time” for the Columbus Explorers after the final out was recorded in their 2-0 regional final win over Taravella, clinching the team’s fifth trip to the state final four in the last nine seasons.

As many times as the program has been to the state final four, the dog piles still never get old for the Columbus baseball team.

And there were the Explorers again late Saturday afternoon, storming the mound to mob picher Jack Delgado and start jumping on top of each other after the last out was recorded to celebrate their 2-0 victory over Taravella in a Region 4-7A final at Columbus High School.

We should say the final “outs” plural because, with the tying runs on base, the game ended on a double play, which was only appropriate as the theme of the afternoon for Columbus were DP’s turned by the infield, most notably shortstop Ariel Garcia and second baseman Kyle Marti.

The first three were perfectly executed 6-4-3 turntable doubles from Garcia to Marti to first baseman Tony Casanova. But the last one was a clutch unassisted effort by Marti who got a slow roller to second and managed to barely tag runner Edgar Marquez on his way to second and quickly make a short throw to Casanova barely getting Justin Rivera to end the game.

“At first I was thinking I might only be able to go to first,” said Marti of his game-ending play. “But then I saw that he was not running too fast and when I got the ball just tried to reach out and tag him which I managed to do.”

Columbus, which improved to 27-4 advances to its fifth state final four in the last nine seasons and will take on Marjory Stoneman Douglas, which defeated Palm Beach Gardens in the opposite region final, in a 7A state semifinal on Friday, May 21 at 1 p.m. at CenturyLink Sports Complex in Fort Myers.

“Four double plays in one game is really something,” said long time Columbus Manager Joe Weber who will be going for his third state title in Fort Myers to add to the two he got in 2003 and 2015. “We have a lot of ways to win games here. We hit 43 home runs this season so we like to play the long ball and I thought we hit three or four today that normally on a day where the wind isn’t blowing might’ve been out. We like to run – stole a lot of bases this season but their lefty (Taravella starter Chris Scinta) had a good move and kept picking us off. So one of those other ways is great defense and every time we got in trouble, our defense made a play and bailed us out.” 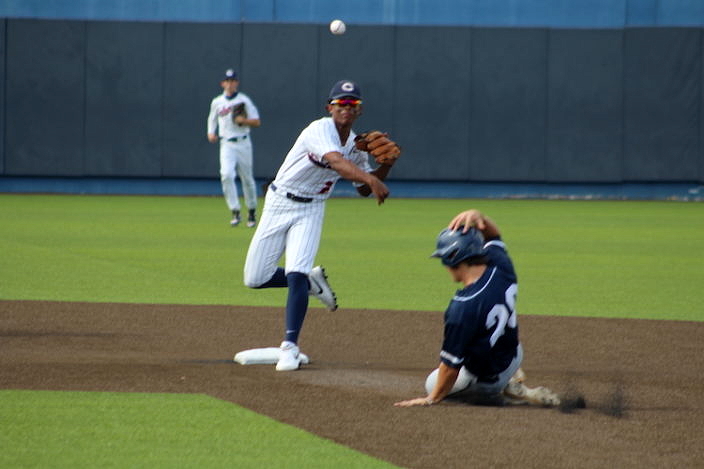 Double plays were the theme of the day for the Columbus infield and here, second baseman Kyle Marti completes a third inning 6-4-3 trick.

But the best defensive play of the day wasn’t even a double play and came when Taravella’s Luis Rodriguez led off the top of the seventh. Down to their last three outs, the Trojans, who had just two hits to that point off starter Kainen Jorge (who had to come out after three innings when he hurt his arm) and Delgado, were desperate for baseunners.

It looked like they would get the leadoff man on when Rodriguez bounced one between third and shortstop that was headed to left field. But Garcia not only dove to his right to stop it, but quickly sprung up and fired a laser strike to Casanova to barely get Rodriguez.

The play became even more significant when Jassiel Valbuena then came up and singled to center and Delgado hit Marquez. But instead of bases loaded no outs, which would’ve had the Trojan dugout in a frenzy, it was first and second with one out setting the stage for Marti’s game-ending double play.

“I saw it going in the hole and managed to just get my glove on it,” said Garcia of his big play. “I didn’t really have any time to think about it, I just had to react and get as much on the throw as I could and fortunately it got there in time. As far as all the double plays today, Kyle and I have been teammates for a long time (both are seniors), we’re brothers and turning DP’s has become second nature.”

Marti quickly jumped in with a smile and “I wonder if we could do it blindfolded.”

On a day where pitching dominated (both teams had a combined five hits) and runs were at a premium, the Explorers got both of theirs early, one each in the first and second inning.

The first inning run was unearned as the Explorers loaded the bases with one out on two walks and an error at first base and Rafael Flores sprinted home from third on a pass ball. As great a defensive game as he had, Garcia came through in the second when, with Casanova on first and two outs, launched a tape measure shot (about the only hard hit ball off Scinta all day) that bounced off the wall in left center scoring Casanova.

The beneficiary of two of those four double plays, Jorge was cruising along with two outs in the third when he suddenly felt a tug in his arm according to Weber. He was force to come out but Columbus didn’t miss a beat with Delgado who faced just 11 batters over the next three innings-plus before his defense bailed him out of potential final inning jam.

“I knew before I was going to come in at some point if Kainen couldn’t finish but obviously it was a lot sooner than I thought when I saw him get hurt,” said Delgado. “The time came so it was time to go in there and start gobbling up outs. My job became pretty easy today because my defense had my back, especially with those double plays we turned.” 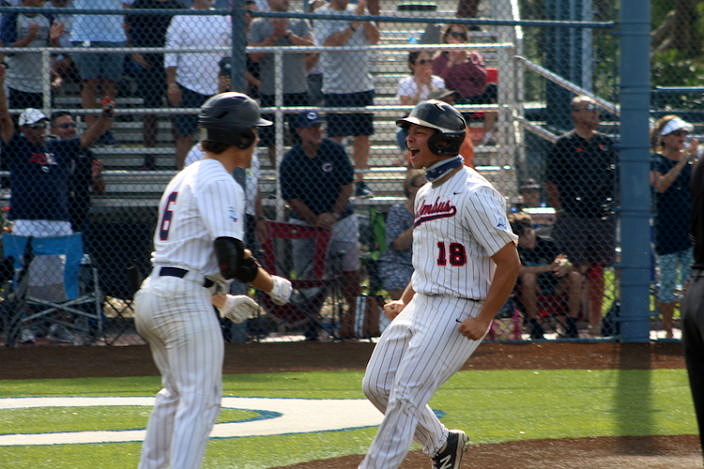 Tony Casanova (18) is greeted by teammate Rafael Flores after scoring his team’s second run in the second inning following an Ariel Garcia triple.

On the other side of the field, it was heartbreak for manager Joe Giummule and his Taravella players. The program was in its first regional final since 1998 and looking to advance to state for the first time since 1996. For the longest time Giummule gathered with his players in right field to talk and console.

“Obviously we’re disappointed and upset because we wanted to keep advancing but we accomplished a lot this year and that’s something that shouldn’t go unnoticed and we should be proud about,” said Giummule. “I told the kids that they need to walk out of here with their chest out and head held up high. There’s nothing to be ashamed of, we should all be proud and walk out of here with Trojan pride.”

Giummule and his players also played this entire season with heavy hearts. Last summer the school’s athletic director and former baseball head coach Jason Stein passed away due to COVID-19 and the team had dedicated its season to his memory and his family.

“We rode that all year and kept Jason’s family in our thoughts all season long,” said Giummule. “The community has been very supportive of his family and how the team meant to Taravella High School. He represented not only the school but he was a baseball guy. Listen the wind was blowing out every game here this year until today. We were talking about that. Columbus had 43 homers on the year and we had two. So maybe Jason probably kept a few of those balls in the park for us today and gave us a chance to win.”