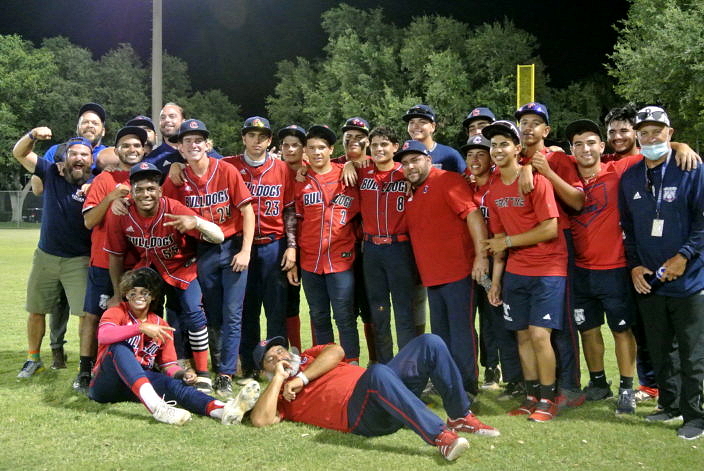 The COHEA Bulldogs celebrate on the field after an emotional come from behind win over the Coral Spring Charter Panthers.

The COHEA Bulldogs (10-17-1) fought back from a two run deficit in the final inning to defeat the Coral Springs Charter Panthers (13-8) on Tuesday evening by a score of 4-3. Hammock Park is the cavernous home to the Panthers and up until Tuesday night, there had only been one home run that barely cleared the deep and high outfield fence all season long.

Bulldogs senior slugger Victor Sanchez doubled the season total of homeruns at Hammock Park in a single game to lead his team to the Regional Finals.

Sanchez delivered his first home run in the top of the fourth inning to tie the game 1-1. Up until that point the Bulldogs had only managed two singles off of Panthers starter AJ Prendergast. It was a rare mistake from the Panthers front line starter who would resettle to retire the Bulldogs lineup in order in the fourth, fifth and sixth innings, notching six strikeouts along the way.

Prendergast entered the night 8-0 on the season and looked very much as advertised for nearly all of the affair.

The Panthers reclaimed the lead in the bottom of the fourth inning when sophomore Jeovanni Hernandez scored on a passed ball. Hernandez led the Panthers offense with two runs scored on one hit, two walks and three stolen bases. The next inning, the Panthers added another run on a Haiden Walters RBI single to center and pushed their lead to 3-1.

The Panthers were firmly in control as they took the field in the top of the seventh inning with the best pitcher in the division out on the mound.

First year COHEA manager Laz Fundora never lost faith in his team. Heading into their final at bat, he did not even have remarks prepared to address his seniors in the event that this was their final game. He simply knew that somehow his boys would find a way to advance, like they did last week as heavy underdogs against a powerhouse Cavalry Christian team to pull out an improbably 2-1 victory to reach the Regional Semifinals.

“The kids just clicked” said Fundora. “They believed in themselves. They bought into our system. All credit to our kids, they always battle to the bitter end. They practice with a purpose. For weeks, these kids have done everything they have been asked. They never hung their heads no mater what situation. Congratulations to them. I’m so proud of them.” 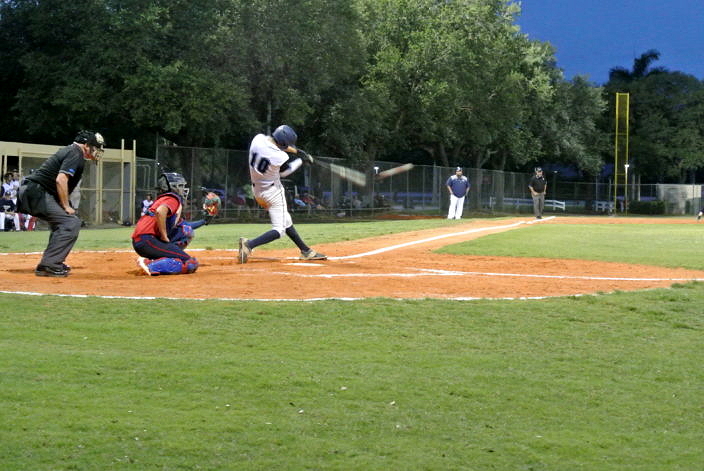 Fundora’s faith was rewarded when Victor Sanchez led off the seventh inning with a blast into the night sky to bring the score to 2-3.

“I knew it was gone when I hit it” said Sanchez. “I worked the count full but the last two pitches were curveballs. I was looking for a fastball and put a good swing on one.”

The homerun knocked something loose for the Panthers. Prendergast was relieved after giving up a single to Dariel Castillo and walking Matt Magluta. Robert Boing came on to pitch but it felt like the universe conspired against the Panthers at this point as Boing hit Ken Martinez to load the bases. Things completely unraveled for the Panthers as a wild pitch and passed ball allowed the Bulldogs to tie the game and take the lead 4-3 with no outs. Boing settled to record three straight outs to end the inning. However, it was now the Bulldogs game to lose.

COHEA senior pitcher Chris Fernandez retired the Panthers in order to get the win and send the Bulldogs to their first ever Regional Final. His teammates, coaches and the school principal mobbed the crafty right hander on the field to celebrate.

“We are doing this for each other” said Fernandez. “Everyone here has each other’s back. I just try to do my best to keep my team in the game for as long as I can.” 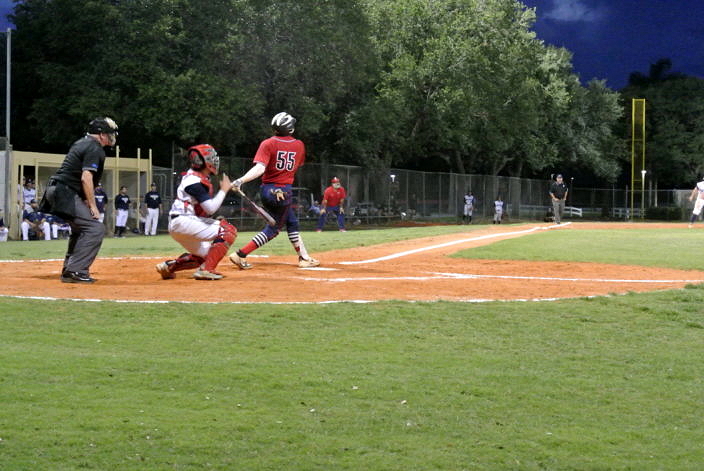 It was a heartbreaking end to the season for Coral Springs Charter. The Panthers suffered an unfair amount of attrition in the offseason and only one senior remained, Damian Rodriguez. Coral Springs Manager Charlie Fine spoke highly of his lone upperclassman, who finished among the division leaders in batting average and stolen bases.

“Right now it obviously stings. But I’m proud of these guys. Nobody gave us a chance this year and we finished in the Semis. They never gave up. I’m most proud of Damian. I’ve coached him since he was in sixth grade. His growth has been incredible. He’s an absolute stud. He has a big, bright future ahead of him.”

Coral Springs Charter also has a big, bright future ahead of them with a returning cast of mostly underclassmen for 2022 there is a much to be excited about.

As for the Bulldogs, their storybook season continues with a Regional Finals matchup with Westminster Christian next week and a trip to the State Finals on the line.