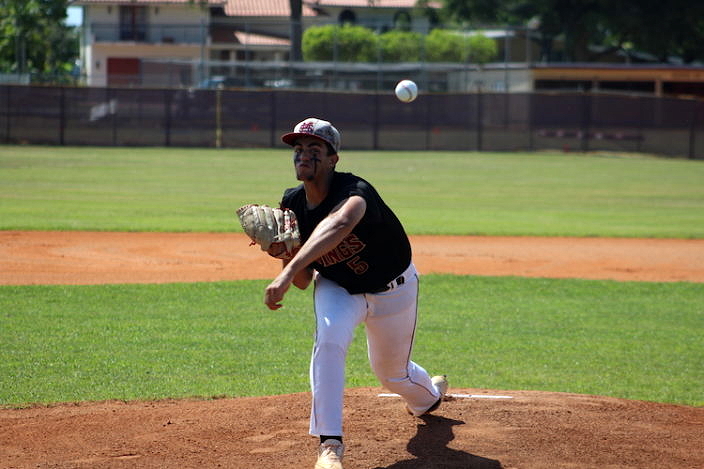 One thing about the Miami Springs Golden Hawks. They know the route to Fort Myers.

Just two years after making a historic first-ever trip to the state final four and dealing with 2020’s “non-season” due to COVID, the 2021 regular season was a struggle as the Hawks went through plenty of peaks and valleys en route to a 10-10 record.

But all of that is in the rearview mirror now and following last week’s district playoff victories over Key West and St. Brendan, Springs continued to build on its postseason momentum on Thursday afternoon.

That after the Hawks plated four runs in the first inning and then cruised to a 7-1 victory over North Miami Beach in a Region 4A quarterfinal matchup at Springs’ Shelly Dunkel Field.

The Hawks are now just two wins away from a return trip to Fort Myers and into the regional semifinals for the second straight season, a first in program history. Springs will host Mater Lakes Academy, which shutout St. Brendan 2-0 in the opposite quarterfinal, on Tuesday, May 11 at 3:30 p.m.

“You always want to get hot at the right time and my boys are starting to click right now,” said Miami Springs manager David Fanshawe. “We’ve got guys in this dugout that were there (at state) two years ago and it’s important to have them on this team right now because they talk to the other players in the dugout who were not there and it’s like they want to kind of lead the way.”

Fanshawe watched his starter Jonathan Alorda struggle in the first inning but once the Hawks got him those four runs in the bottom of the inning, Alorda settled down and started mowing down NMB batters. He wound up pitching five scoreless innings and striking out 10 out of a possible 15 batters including seven out of eight spanning the end of the first inning and beginning of the third.

“The first inning was a little rough but I found my groove by the second inning and was able to cruise from there,” said Alorda. “My fast ball was really on, I threw a few curve balls here and there but staying ahead in the count was key which is always the case when you’re on the mound. Those four runs helped calm me down and I was able to settle into a groove.” 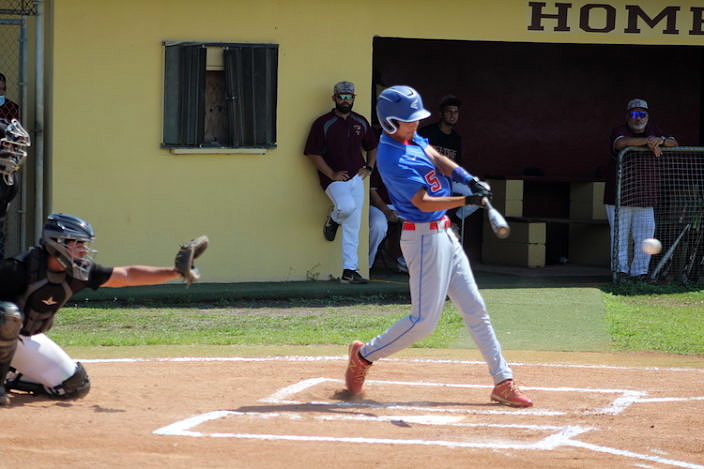 North Miami Beach leadoff hitter Daniel Murrillo leads off the game with a base hit to center.

Alorda’s first inning started when he gave up the only hit he would give up when NMB’s Daniel Murrillo led off the game with a single up the middle. When Murrillo got cut down trying to steal second, that proved important as Alorda walked both Sebastian Cruz and Aaron Chavarria. But instead of bases loaded no outs, it was first and second with one out. Alorda then started his string of seven K’s in an eight batter span by putting down Sean Lewerton and Jesus Rodriguez to end the inning.

Springs then quickly reached Rodriguez, NMB’s starter with that four run first when Abriel Delgado and Jordan Perez singled to start the inning. A Jason Torres deep fly ball advanced Delgado to third on a tag up and he scored on a Jaliesky Garcia ground out to second.

Then came a key play as Christian Olazabal hit what could’ve been an inning-ending groundout to second base but instead turned into an error scoring Perez with the second run. After Alorda walked, center fielder Bryan Mojica stepped up and ripped a shot to the fence in left center scoring two more runs.

“He (Rodriguez) was throwing a lot of off speed stuff but I got a fast ball down the middle and turned on it,” said Mojica, one of the handful of Hawks on that state team from 2019.. “I just kept waiting for a fast ball and eventually got one.”

Rodriguez settled down and pitched three solid innings after that but ran into trouble in the fifth when the Hawks scored twice more, an RBI single by Garcia and RBI fielder’s choice by Olazabal bringing in the two runs to build a 6-0 lead.

Jesus Gonzalez came in for Alorda to start the sixth but lost the shutout when, with Cruz on third with two outs, Lewerton delivered an RBI single to left. 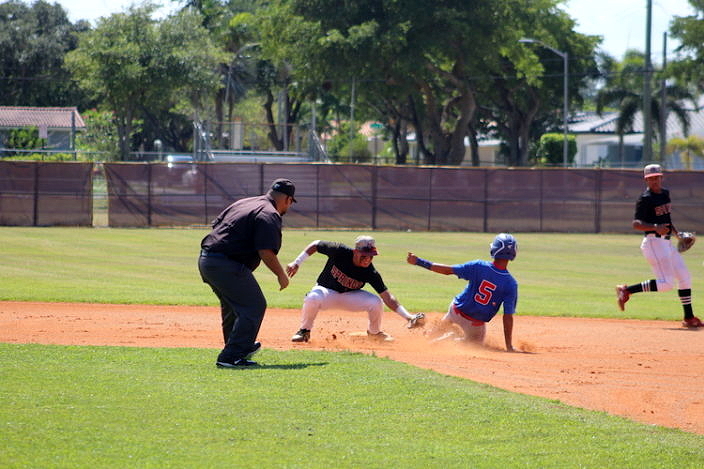 Following a base hit to lead off the game, NMB’s Daniel Murrillo is thrown out trying to steal second by Springs second baseman Bryan Betancourt.

Springs got that run back in the bottom of the inning on an RBI single by Bryan Betancourt before Olazabal, who has been hurt and unable to pitch most of the season, came in to record the final three outs.

Even though the season came to an end for North Miami Beach, that in no way watered down what was a historic season for the Chargers (10-9) who were making only their fourth regional appearance in the 60-year history of the program and first since 2004 and has manager Yoanquy Martinez excited about the future.

“I have a young group. The seniors came through this year which is why we made it this far,” said Martinez. “But I’ve got a young group here and the younger guys learned under them so hopefully we’ve established something with our program for years to come. It was my first year, an amazing season can’t wait to get back at it again next year. Hopefully it won’t be another 17 years before we make another regional appearance.”