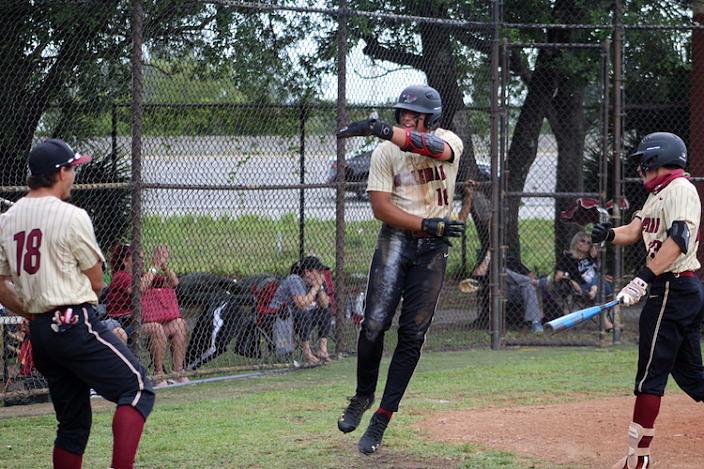 Goleman’s Brandon Olivera (center) celebrates with his teammates after scoring a first inning run to put the Gators up early.

They may not be district rivals anymore, but that doesn’t mean when tradition-rich programs like Goleman and Hialeah get together, that there won’t be plenty of fireworks and some spirited competition. For two teams with a rabid fan base, that’s exactly what those fans got treated to on Friday afternoon, when the two sides squared off in a Region 6A-4 quarterfinal at Goleman High.

In a game that probably would’ve normally attracted at least 300 people but was limited to 70 because of still-in-place COVID restrictions by Miami-Dade County Public Schools, the Gators and T-Breds went at each other just like “the good old days.” When it was over, it was Goleman that came up with one more big play than Hialeah. Brandon Olivera came through with a clutch, two-out RBI single to left center in the last of the fifth that snapped a 2-2 tie and proved to be the difference as the Gators edged the T-Breds 3-2.

“We’ve been eliminated by Hialeah a few times in regionals, so it’s a great feeling that we finally beat them,” Goleman Manager Jose Lopez said. “We always had a lot of good battles when we were in the same district, and it’s been tough to beat them, so it’s nice to come out on top.”

Goleman (12-10-1) moves on to next week’s regional semifinal round. The Gators will travel to take on HSBN’s No. 3 ranked Miami-Dade County power Doral Academy, which mowed down South Broward 10-0 in the opposite quarterfinal, on Wednesday, May 12th at 4 p.m.

Hialeah was in position to take the lead in the top of the fifth, when Herick Hernandez reached on a two-out throwing error and Pedro Acosta hustled from first over to third. It was here that the T-Breds attempted the old “stumble play”, when Hernandez took off for second but stopped halfway to try and draw a throw from catcher Sammy Hernandez and get in a rundown, while Acosta tried to score from third. 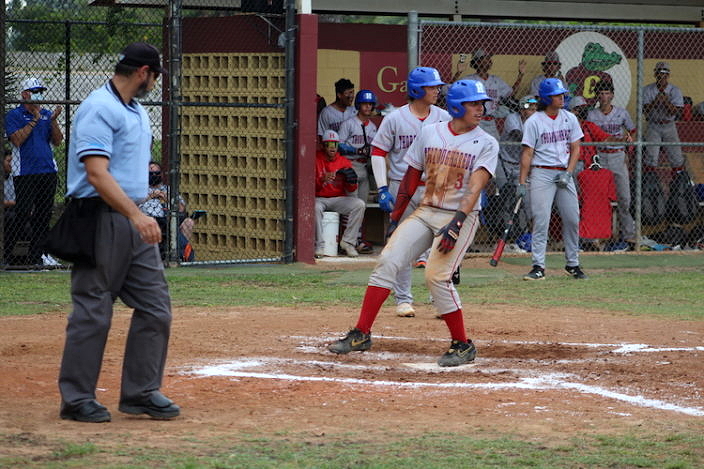 Lazaro Hernandez steps on the plate scoring Hialeah’s second run in the fourth inning. which tied the game at two.

Hernandez made the throw, but as soon as Acosta broke for home, first baseman Chris Perez made a quick catch-and-throw back home to Hernandez. Acosta tried to create contact on a collision at the plate, but Hernandez hung on to the ball and made the tag to end the inning.

Then came the decisive bottom of the fifth for the Gators. After Jesus Maysonet led off with a bunt single, leadoff hitter Derick Corona hit into a fielder’s choice, before advancing to second when James Hernandez hit a little dribbler back to the pitcher for the second out. That set the stage for Olivera. But before he stepped to the plate, Hialeah manager Juan Garcia, who had been playing a little bit of “pitcher’s chess” with his pitching staff early on and still had his ace Ervis Solis in the bullpen, then went to his big arm.

Solis had Olivera in a 1-2 hole but left a fastball up and Olivera roped it into left-center field, as Corona raced home with the go-ahead run.

“I was just sitting on a fast ball, he left it up and I put a barrel on it,” said Olivera. “I didn’t try to do too much with it, just put it in play and got it in the gap.”

Now it was up to Olivera to protect his own lead. He had replaced starter Jordan Vargas in the top of the inning and did just that as he allowed just one Hialeah base runner over the last two innings, and retired the side in order in the seventh to close it out.

“I was just trying to throw strikes and do the best I could out there,” Olivera said. “This has been a long time rivalry we’ve had with them and they beat us twice the last few seasons in preseason classics, so today was a little payback. Now we’re looking forward to moving on to the next challenge.” 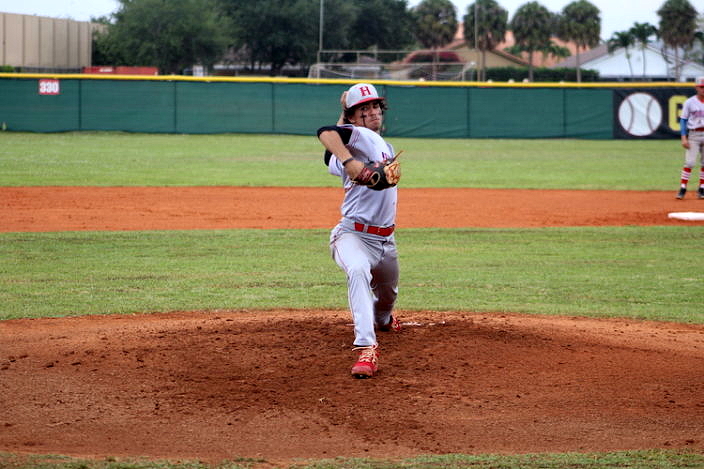 For Garcia, it was a tough end to a frustrating day, as his T-Breds finished the season with a 16-13 mark.

“We knew coming in there today that it would probably be a close game, another Hialeah/Goleman classic and that’s what it was,” Garcia said. “We made a few plays but they made a few more than us and came up with the big hit against one of our best pitchers. We’re disappointed we came up short, but it was a great game and this is baseball. It’s about scoring runs and whoever scores more wins, and they got one more than us, so take your hat off to them and the best of luck to them moving forward.”