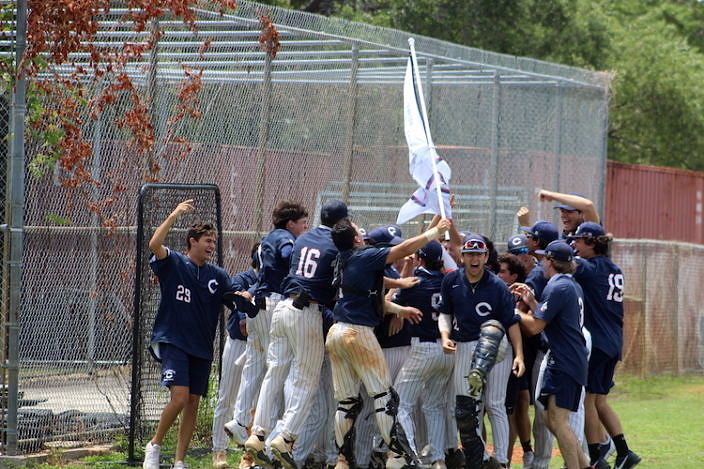 Columbus players celebrate their win over Braddock by hoisting the school flag.

The Columbus Explorers capitalized on some late miscues to rally for victory in Thursday morning’s playoff showdown of two of the best teams in Miami-Dade County this season, knocking off the Bulldogs 5-3 in a 7A-4 regional semifinal at Braddock High.

Columbus, 26-4 and ranked No. 4 in HSBN’s Miami-Dade Power Rankings, moves on to the Region 7A-4 Final and will host the Taravella Trojans (19-4), which defeated Western in the opposite semi, at Columbus High School on Saturday, May 15 at 4 p.m. The Explorers will be seeking their fifth trip to the state final four in the last nine seasons and third state title after winning it in 2003 and 2015.

The two teams brought a combined 50-7 record into the game, with Braddock (25-4) having perhaps its best season in program history. The Bulldogs were cruising along through five innings nursing a slim, 2-1 lead when disaster struck. Two errors were accompanied by three wild pitches, two with runners on third that easily scored. Columbus scored four runs and never looked back.

“Great execution today was the key,” Columbus manager Joe Weber said. “We knew we had to execute today because Braddock had great pitching. You’ve got to take your opportunity when you can get it. We got one in the sixth inning and took advantage of it.”

The Explorers had just two hits off Braddock starter Chris Orduna going to the sixth inning. When Gabe Perez hit a harmless infield ground ball to start the inning, it looked like Columbus was down to its last five outs. But the game turned here when the throw to first missed the mark and Perez hustled down to second. The Columbus spark was lit.

Pinch-runner Lazaro Jimenez made it to third on a wild pitch, and then came home when Columbus’ starting pitcher Kyle Marti lined a shot just inside the left field line for an RBI double that tied the game.

With no outs Jorge Acevedo laid down a sacrifice bunt to advance Marti to third but did a lot better than that as his bunt was a perfect trickler down the third base line that he easily beat out for a hit. Runners now on the corners with no outs and the Columbus dugout making as about as much noise as a dugout could make, Marti scored the go-ahead run and Acevedo went to second on a wild pitch. 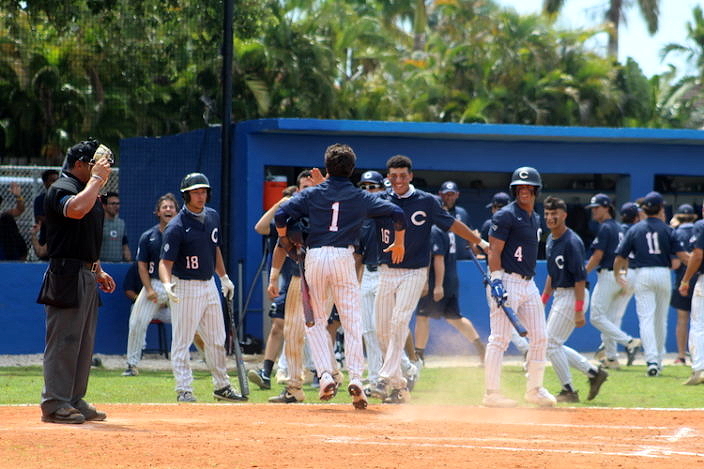 Columbus pinch runner Lazaro Jimenez (1) is greeted by excited teammates after scoring the game-tying run in the sixth inning.

Things did not get better for Braddock. Another throwing error followed when a slow roller off the bat of Diego Prieto was thrown wild down the right field line, as Acevedo scored easily and Prieto wound up all the way at third. Another pitch in the dirt got away from Braddock and Prieto then trotted home with the final run of the inning and a 5-2 Explorers lead.

Marti was replaced by reliever Eddie Leon after three innings. After entering to start the fourth, Leon was mowing down Bulldog batters in order before a hiccup in the last of the sixth inning. With two outs, Jose Hernandez launched a towering solo home run over the center field fence.

But there was no panic. Leon struck out Victor Davila to end the sixth, and he got the first two batters out to start the seventh. He then walked Ozzie Martinez to bring the tying run to the plate, but struck out the final batter to end the game.

“For me it’s all about being confident and composed,” Leon said. “Like nobody is better than you no matter what. They could be the best hitter in the world or the worst hitter in the world. You can never underestimate anybody or overestimate anybody. It’s all about keeping your head in the game and going to your best pitch and today my best pitch was the fast ball so I worked that in and did what I did.”

Columbus took a 1-0 lead in the second when Marti doubled down the left field line and eventually scored on a Prieto single to left.

“I’m so proud of these guys because there are 22 kids on this playoff roster and all 22 started at Columbus in ninth grade, which is unheard of nowadays,” Weber said. “I watched them go through the whole COVID thing, watched them play freshmen ball and JV ball up to varsity, and I’m just proud that they’ve done it the right way. No 12th-grade ‘ringers’ from the outside around here. They all started together and have come up together, meaning great team chemistry, which is something that can carry you through in big games like the one we had today.”

Braddock did its only offensive damage in the last of the third, when Marti issued one-out walks to Martinez and Rubiera before hitting Jonathan Gonzalez to load the bases. After Jean Baldoquin struck out, Kadar Rabagh came through on a 3-2 count, lofting a soft line-drive hit to center that scored Martinez and Rubiera. 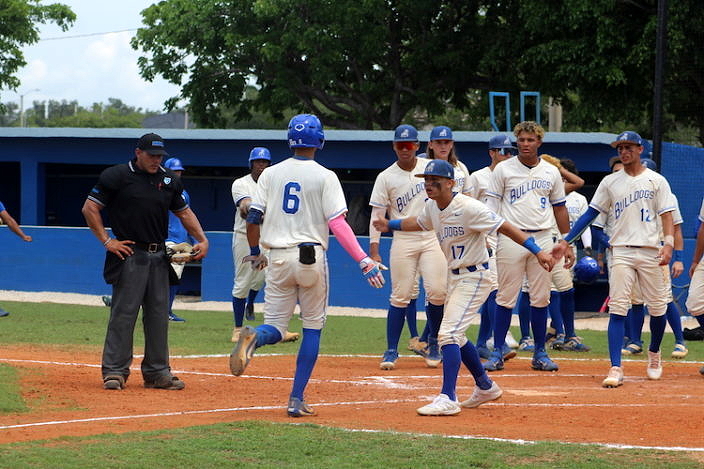 Perhaps the toughest job of the day belonged to Braddock manager Wesley Morejon. One that involved having to talk to his devastated and distraught players after the game was over.

“I came across a quote the other day and used it on them when the game was over,” Morejon said. “It’s ‘don’t cry because it’s over, smile because it happened’. This one stung for sure, especially with that sixth inning when we shot ourselves in the foot, so all the kids are thinking about is that it’s over and all the things they did wrong. But you forget the journey you just went on during the season and all the positives that came out of it and I had to remind them of that. For our young guys coming back, we will need them to learn from this today and keep the chain of success here going.”

Since taking over the program in the 2018 season, Morejon has gone 56-29 the last four seasons. Braddock was off to an 8-1 start in 2020 before the season abruptly ended, then started this year with a 16-0 record. With ten varsity players returning next season, the bar has been set high for them to carry on what was started.