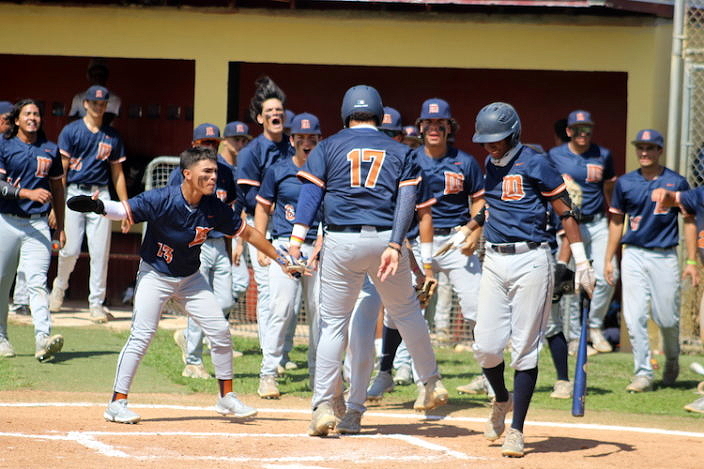 Mater Lakes’ Wilder Puertas (17) is greeted by his excited teammates after scoring a fourth inning run staking his team to a 5-0 lead.

But then came that eighth time.

And when Mater Lakes reliever Andy Hernandez, with the tying run on base, dropped a perfect inside cutter that caught Miami Springs batter Christian Olazabal looking at a called third strike, the Bears finally kicked the doors of history down and celebrated their 7-5 victory over the Hawks in a Region 4-4A semifinal at Springs’ Shelly Dunkel Field.

Six trips to the regional playoffs including twice to the regional semis since 2011 had resulted in frustration for this relatively young program (started in 2008) but all of that ended on Tuesday afternoon when the Bears, who nearly saw a late 6-1 lead disappear, hung on for the win.

A team that does not have a true home field and has played all of its home games at Broward College all season now finds itself in the regional finals for the first time ever and will host North Broward Prep. in a Region 4-4A final on Wednesday, May 19 at 7 p.m. at Broward College.

“It was almost cruel, so stressful,” said Mater Lakes Manager Albert Osorio over those final few moments when Hernandez had two strikes on three different Springs batters with two outs only to see all three reach base. “What a relief when Andy finally threw that great pitch to close it out. I’m very proud of this team but even happier for our principal, Rene Rovinosa. He’s one of the best principals we have because he just doesn’t come to our games, he actually gets on the bus with us and supports us. Baseball is his baby. He deserved this moment as much as anybody.”

After plating an insurance run in the top of the seventh when Dayron Ricabal, after reaching on a hit-by-pitch with one out, stealing second and advancing to third on a sacrifice bunt, scored on a wild pitch to make it 7-4, Bears players were ready to storm the mound when Hernandez recorded the first two outs in the seventh.

But then he walked Jordan Perez on a 3-2 count, wild pitched him to second, gave up an RBI single to right center by Jason Torres (with two strikes) before facing Jaliesky Garcia. When he delivered a great pitch on a 2-2 count, the dugout jumped out to celebrate. But the call was ball three. One pitch later, he walked Garcia who represented the tying run bringing Olazabal to the plate.

Eventually the count would run to 3-2 on Olazabal when Hernandez dropped his perfect pitch in there to close it out as Mater Lakes, ranked No. 6 in HSBN’s Miami-Dade County power rankings, improved to 22-7.

“A perfect pitch, I threw him an inside cutter and froze him,” said Hernandez, a sophomore who transferred over from Monsignor Pace last summer. “Man, it seemed like a lifetime out there trying to get that last strike. I thought the blue might’ve hugged me a little bit a few times but I got done. What matters is the dub (W) and we got it.” 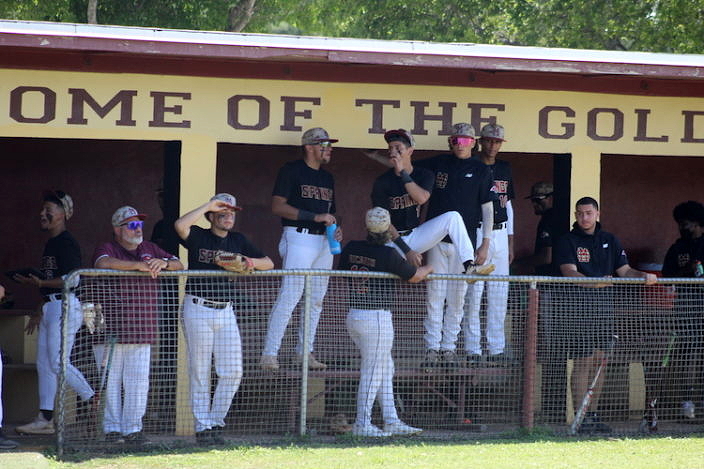 Mater Lakes jumped all over Springs starter Bryan Mojica for two runs in the first, an RBI single by Wilder Puertas the key hit, one more in the third (a double by Puertas and RBI single by Nelsido Nuñez) followed by two more in the fourth to build a 5-0 lead and chase Mojica.

The Hawks finally reached ML starter Andrew Tano for a run in the fourth off a double by Olazabal and RBI single from Jonathan Alorda before the Bears came back with a run in the fifth thanks to an RBI triple by pinch hitter Joseph Mincey.

When Perez led off the last of the sixth with a base hit and Torres walked, Garcia stepped to the plate and brought them both home on a triple to the right field corner to make it 6-3, igniting the Springs dugout and bringing Tano’s day to an end.

Hernandez came in to the runner on third, no outs situation and managed to put out the fire, giving up only a one-out infield single to Alorda that brought in Garcia allowing the Bears to take a 6-4 lead to the last inning.

“Everybody has their day and I guess today was mine,” said Puertas who finished 3-for-4 with two RBIs and a run scored. “My approach was to just sit, middle outside on the pitches and try and hit everything up. It feels great to make history for this program but it’s not done yet. We’ve got three more left.” 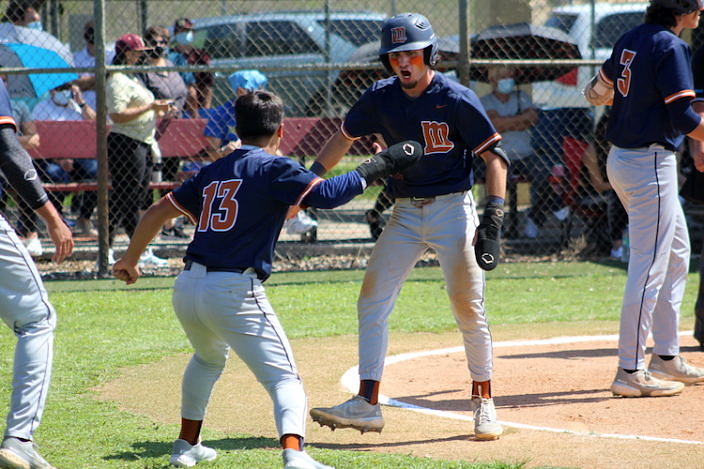 Mater Lakes’ Manny Rivero is greeted by teammate Oscar Bello (13) after scoring the Bears first run of the game.

While it was a disappointing loss for the Hawks who finished 13-11, they probably did well to make it this far as the regular season was an up-and-down roller coaster filled with peaks and valleys, one where numerous injuries set them back.

“Going into the year, you would never have thought we would have to deal with so many injuries but the kids all fought through it, got hot at the right time and it is what it is,” said Springs Manager David Fanshawe. “It stinks for things to end like this but at the end of the day, the better team won today because we dug ourselves an early hole that we couldn’t quite climb out of. But credit to our kids, all I can ask for is for them to fight to the very end and they did that.”