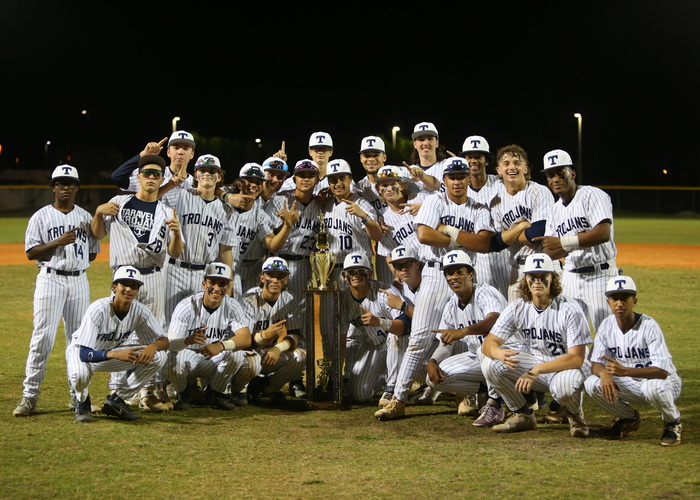 Edgar Marquez lined a bases-clearing double and a trio of Taravella pitchers combined to hold down the Doral Academy offense for a 4-1 win in Friday night’s championship game of the HSBN First Pitch Elite Tournament at Broward College.

Clinging to a 1-0 lead in the fourth inning, the Trojans loaded the bases with one out, setting the stage for the clutch hit from Marquez, who said his approach was a basic one.

“Just stay short to the ball and try to get a hit,” said Marquez, who lined a double down the left-field line, scoring Javier Miranda, who was pinch-running for Aris Rivera. Jacob Smith and Jassiel Valbuena followed to the plate, giving the Trojans a 4-0 lead.

“It’s a big win,” Marquez said, as his teammates hoisted the championship trophy. “We’re looking forward to the season. We’ve got a great team.”

“Edgar has been off to a great start this year,” Giummule said. “That’s his third double in three games. We don’t get that hit there, it’s a different ballgame.”

Taravella sophomore shortstop E.J. Burns got the start on the mound and struck out the first three batters he faced.

“He hasn’t had a whole lot of experience on the mound,” Giummule noted. “He was really, really special tonight for three innings.”

Burns allowed just two hits and struck out five before giving way to Brandon Metiver, who worked 2 1/3 innings, striking out four. Derek Rodriguez finished up for the Trojans, retiring all five batters he faced. 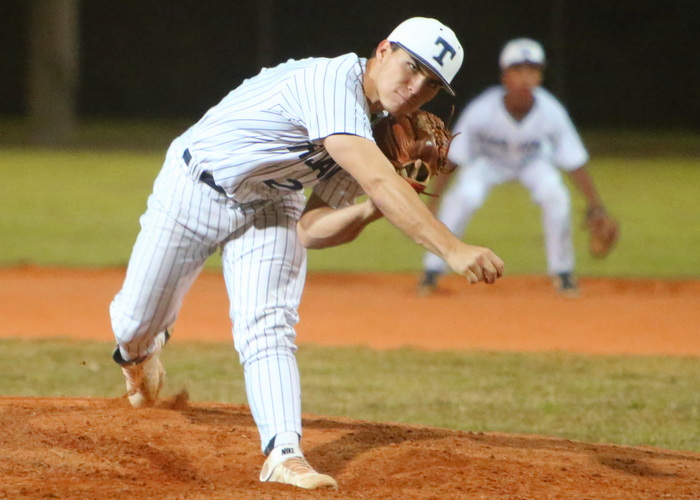 “Pitching was phenomenal for us,” Giummule said. “I mean (Doral) is a nationally-ranked team right there and our pitching staff held them in check.”

The Trojans led 1-0 in the first inning on a double by Vincent Samuel that chased Burns home with the game’s first run.

Doral got on the scoreboard in the fifth inning when Adrian Santana opened the frame with a triple, then came home on a sacrifice fly from Michael Torres.

“This team is extremely young,” said Doral Academy manager Ralph Suarez. “We’ve got extremely good pitching. There’s going to be nights that offensively we’re going to look great, and there’s nights where we’re going to look bad. We’re going to go through some growing pains. We play a really tough schedule. Hopefully as it gets closer to the playoffs we become more consistent.” 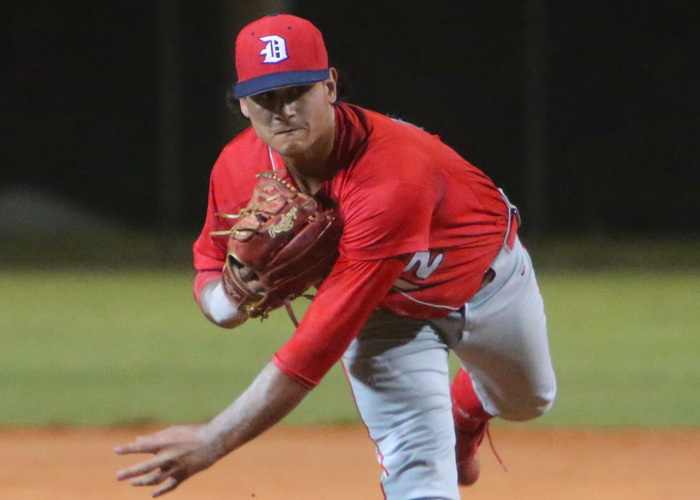 The game on Friday also marked the final one to be played on the Broward College baseball field. It is scheduled to be torn down. That fact made the win on Friday a somewhat bittersweet one for Giummule.

“It’s significant because I actually run a college team and this is my home field in the summer,” he said. “So, it’s a special place for me. I’m born and raised in Broward County.

“It’s disappointing to see it being dismantled, but I’m happy that I was the last person to play on it and be victorious. Losing tonight would have really been upsetting.”

Suarez lamented the decision to tear down the field.