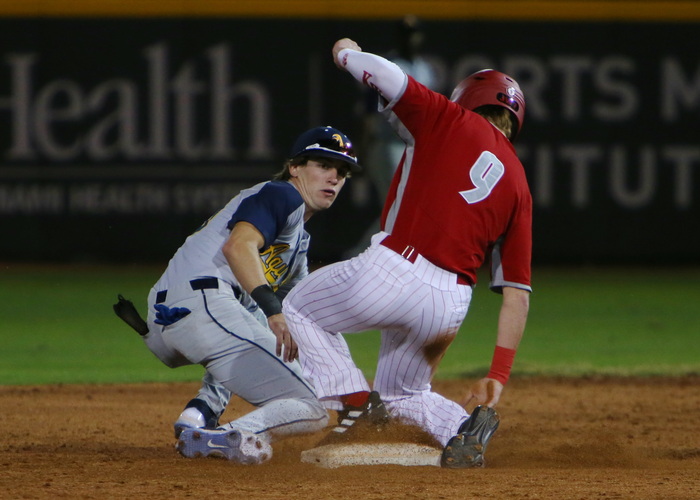 Jack Haggard slides safely into second base on Monday night at Mark Light Field. Haggard had a hit, an RBI, and scored a run in the Conch’s 6-2 win over St. Thomas Aquinas. Photo by Glenn Sattell

Key West took full advantage of its opportunities in the fifth inning, scoring six times to erase a 2-0 deficit and leave Mark Light Field on the University of Miami campus with a 6-2 win on Monday night over St. Thomas Aquinas.

The Conchs, now 7-2 on the season, needed just three hits in the inning to go along with three walks and a hit batsman to send St. Thomas Aquinas, the No. 4 area ranked team in the latest Broward Power Rankings, to its fourth loss of the season against six wins.

The fateful inning started out innocent enough. Down 2-0, Conchs manager Ralph Henriquez summoned Jason Yabrough off the bench to bunt the potential tying runners over to second and third. Yabrough did his job, laying down a perfect bunt that moved both Anden Rady (hit by pitch) and Sam Holland (walk), into scoring position. It set in motion the big inning to follow.

“That bunt set the whole inning up for us,” Henriquez said. “Then we had hit a couple of balls hard with guys on base.”

Rady scored on a balk to make it a 2-1 game and following consecutive walks to Kai Smith and Noah Burnham that loaded the bases, Trevor Zuelch delivered a two-run single to put the Conchs in front for good.

Zuelch was 2-for-3 with a double and a run scored. He had been to camps in the past on the Hurricanes’ home field, but never played a game there. With the extra motivation, he continued his current hot streak at the plate, hitting the ball hard in all three at-bats.

“I’ve had a good week and I just wanted to put some barrels on the ball for my team and that’s what happened,” said Zuelch. “I’m hunting fastballs and if he flips me a curveball, I’ve been hitting those too.”

Jack Haggard and Wyatt Kuhn followed with back-to-back RBI singles and the rally was complete. 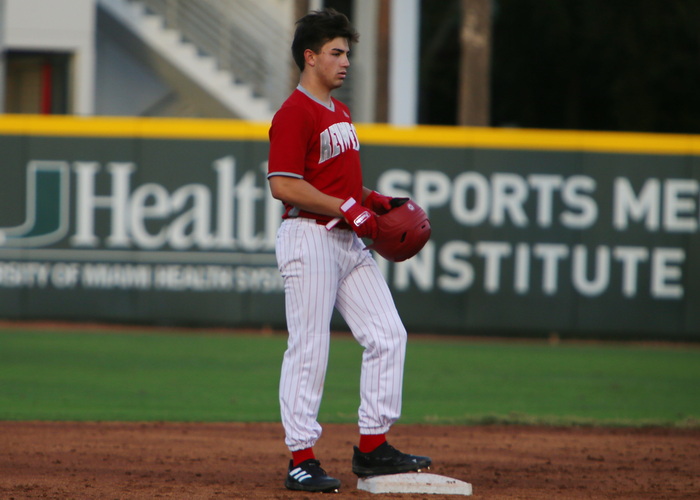 Trevor Zuelch went 2-for-3 with a double, 2 RBIs and a run scored to help lift Key West to a 6-2 win over St. Thomas Aquinas on Monday at Mark Light Field. Photo by Glenn Sattell

It was more than enough firepower for Conchs starting pitcher Jacob Burnham, who went six innings, striking out five while walking just one. The left-hander gave up just one hit after the second inning and struck out the side in the fifth inning.

“I just kind of relaxed on the mound, started trusting my stuff, had that confidence going,” Burnham said. “Then defense made a lot of plays that kept me going, really gave me a lot of trust that if they hit the ball it’s going to get caught and get outs.

“I was happy I gave my team a chance to win and we ended up winning against a very talented team.”

Henriquez brought in Andris Barroso to finish up. Normally a starter, Barroso was in need of some work and answered the call, striking out two in his inning of work.

But until the fifth inning, it appeared as though the Raiders had matters in hand. Single runs in each of the first two innings gave them the early lead and the momentum. Derek Rahim opened the game with a single, then stole second and came around to score on a ground ball off the bat of Giovanny Adames for a 1-0 lead. 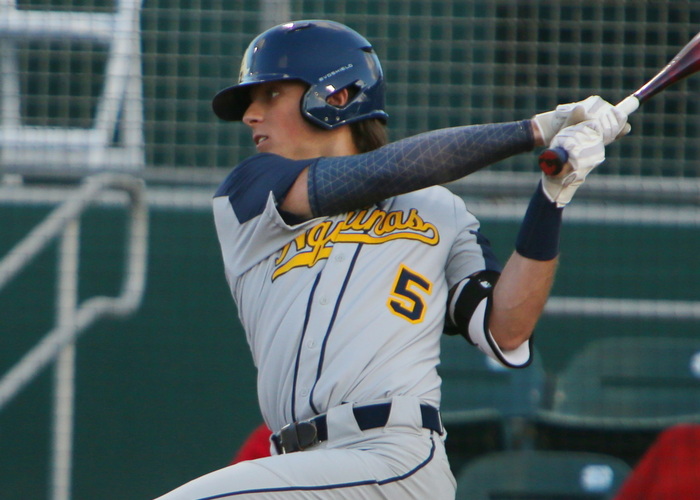 Frank Chiliberti led off the second inning with a double and later scored on a deep infield ground ball by Christian Hamilton for a 2-0 lead.

The Raiders cruised with that lead until coming undone in the fifth inning.

“One inning has kind of been an Achille’s Heel for us this year,” said St. Thomas Aquinas manager Joey Wardlow. “We play well for six or seven, we’ve just got to clean up that one.”

Despite the 6-4 start, Wardlow remains confident in his team’s abilities.

“We’ve got a solid team and a solid pitching staff,” he said. “Our guys work extremely hard to get better.”