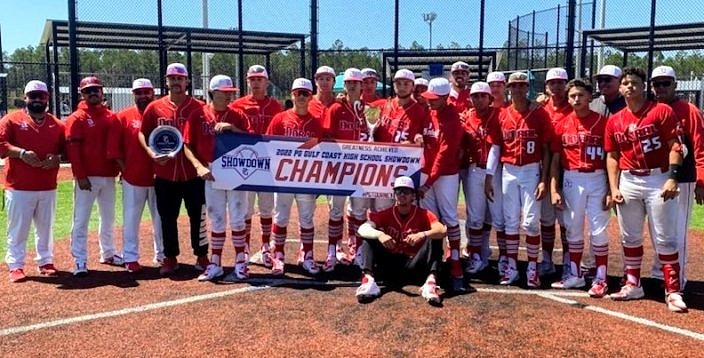 The Doral Academy Firebirds won the tournament title in the best possible way.

Saturday morning, Doral rallied back for the winning run in the bottom of the seventh inning for a 6-5 victory over the Houston County Bears of Georgia to win the championship of the Perfect Game Gulf Coast High School Showdown tournament. The Firebirds (10-3-1) trailed nearly from the start, but battled back to tie things up in the bottom of the fifth to set up the dramatic finish.

Reliever Michael Torres earned the win for Doral, as he struck out four in three-and-two-third innings. Adrian Santana went 2-for-3 with a pair of RBI, and Alejandro Ludeiro was 2-for-4 with three RBI.

After dropping the opening game of the tournament in a 3-1 defeat to the Arnold Marlins, Doral bounced back to win three straight games to claim the title. The Firebirds mercy-ruled IMG Academy 11-1, and then they won 6-2 over Knoxville Catholic of Tennessee to reach the finale.