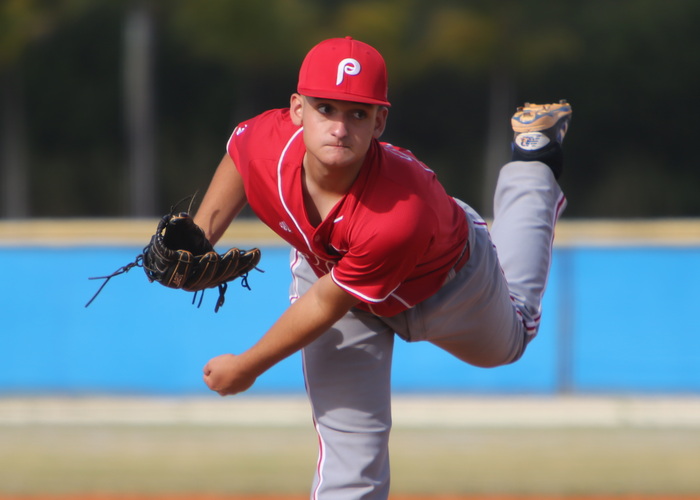 If there was still doubt about the successful return to the mound for Monsignor Pace starter Kenny Escobar, the left-hander answered all the questions on Tuesday afternoon. An injury kept him from pitching last season but the senior returned with a vengeance, striking out nine over five innings in the Spartans’ 6-0 win at Keys Gate Charter.

Escobar allowed just two first-inning singles while striking out the side. He retired eight of the final nine batters he faced, fanning the final two as the Spartans improved to 5-1.

“Kenny has had some tough luck,” said Monsignor Pace manager Tom Duffin. “But he’s come out and been very solid for us. The thing about Kenny, he mixes up his pitches well, he attacks the zone and he pitches ahead. So, any time you can do that as a pitcher, if your defense plays behind you, you’re going to be O.K.”

While his overall performance was outstanding – no Knights batters made it past second base – Escobar said he could still do better.

“I came out feeling good but I was a little off today,” Escobar said. “I didn’t throw that many strikes; not as much as I wanted to,” said Escobar, who walked just three. “But usually, I don’t walk people.”

A big key to Escobar’s performance was his ability to paint the corners. 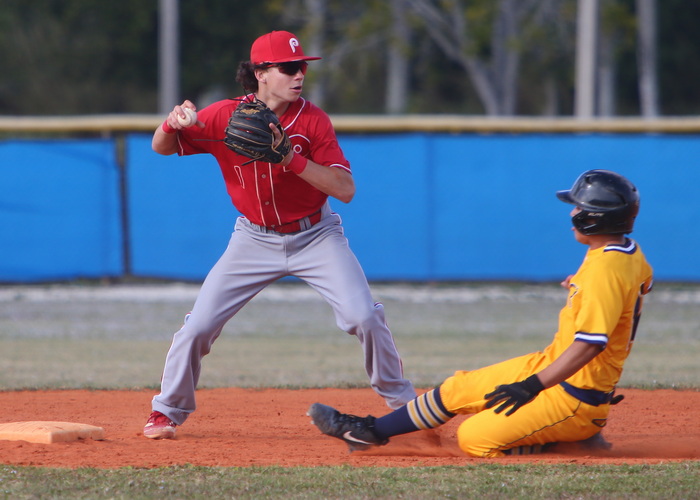 Monsignor Pace’s Sean Duffin turns a doubleplay in the seventh inning of the Spartans’ 6-0 win at Keys Gate Charter on Tuesday. Photo by Glenn Sattell

Jonathan Vasquez closed it out for the Spartans, pitching two scoreless innings of relief. He struck out three and allowed just one hit, a single with one out in the seventh.

The Spartans got all the run support they would need in the first inning. Lead-off hitter Jacob Poletto doubled, for one of his two hits, and later scored before Arquimedes Barrios delivered a clutch two-out, two-run double, scoring Adrian Dominguez and Luis Munoz for an early 3-0 lead.

Barrios was 3-for-4 at the plate, leading the 14-hit attack, and reached base all four times.

“I just saw the ball really big today,” said Barrios. “Just stay through the middle of the field, stay on time,” added the left-handed swinging left fielder of his approach at the plate.

The Spartans added a run in the fifth inning on a single by Sean Duffin that scored Munoz. Both players had two hits apiece. All nine Spartans in the starting lineup had at least one hit. 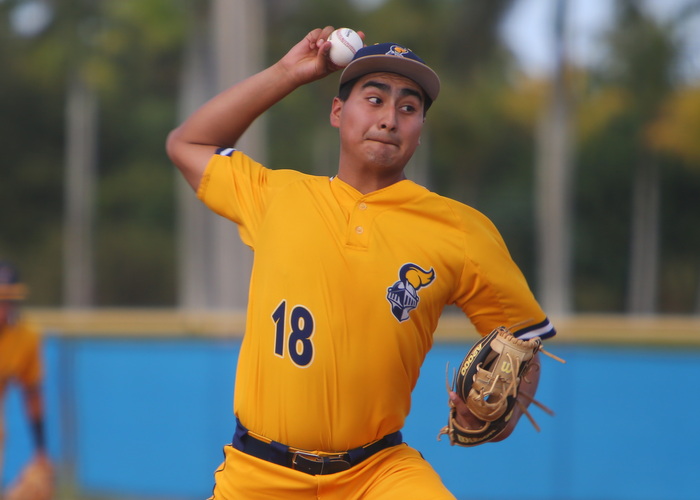 Keys Gate Charter pitcher Jorge Leon fires a pitch to the plate in the Knights’ home game on Tuesday. Photo by Glenn Sattell

Rickey Rivas delivered a two-run single in the sixth inning to complete the scoring.

But that didn’t sour Benavides’ optimism for the young season.

“Our goal is to repeat,” said Benavides, his team coming off a region semifinals appearance last season. “But we’ve got a mix, we’ve got a lot of young guys that did not start last year. So, we’re going to have a roller coaster season. We’re going to be up and down.”