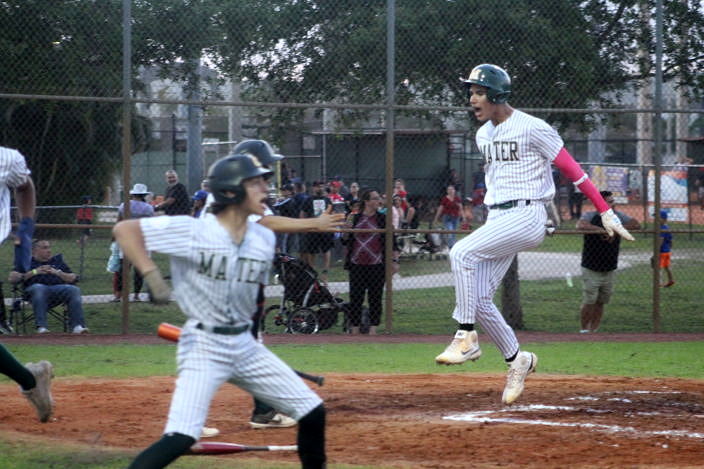 Mater Academy’s Christopher Sosa jumps up high and celebrates as he crossed the plate for the Lions’ seventh run of the game.

After jumping out to an 8-1 lead after two innings, the Mater Academy Lions were probably thinking it might be a nice quick night of maybe a five-inning mercy rule win over Everglades and everybody would get to go home early.

But the Lions, with five freshmen in the starting lineup, got to put another learning experience under their belts. And that is not to take your foot off the pedal after taking a big early lead.

Little did they know that the Gators had plenty of fight in them and fought they did, battling back to turn what seemed like a lopsided loss into a close, competitive contest.

But in the end, Mater Academy’s early lead proved to be enough as the Lions hung on for an 8-6 victory on Wednesday night at their home field of Westland Gardens Park in Hialeah Gardens. After winning just three games all of last season, the Lions are now 5-2-1 in a 2022 campaign that hasn’t even reached its halfway point yet.

“It’s great to score those runs early and and be in that situation but when you’ve got somebody down and you’re stepping on them, you’ve got to really just open up a hole and put them down in the dirt and put them down and we didn’t do that tonight,” said Mater Academy manager Humberto Bencomo in his first year at Mater after coming over from Gulliver. “This is what happens when you have so many young kids in the lineup without all of the experienced. It should’ve never been this close but at least we showed the poise to hang on and get the win which was the important thing.”

Bencomo’s Lions hung on for the win thanks to a nice pitching performance from Christopher Sosa, one of the team’s top pitchers and one of those five freshmen starters. After three different Mater pitchers struggled all night, issuing up seven walks and two hit batters over the first four-plus innings, Sosa entered in the fifth inning and managed to record the final eight outs to put out the Everglades fire.

“They told me I might pitch tonight but when we went up 8-1 I’m thinking there was no way I was going to see the mound,” said Sosa. “All of sudden, things tightened up and the next thing you know, I’m on the bump.” 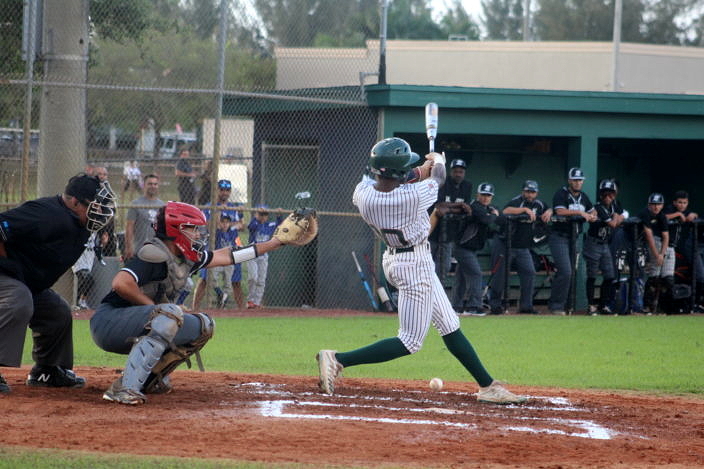 Mater Academy’s Yoan Carlos Diaz launches a deep fly ball to left in the first inning that was just foul.

With the Gators having already plated two runs in the inning to close within 8-5, Sosa inherited a bases-loaded, one out situation. Things only got worse when his very first pitch, he hit Christian Miranda with an inside curve ball to bring in another run. With the Everglades dugout banging on the rails making as much noise as they could, Sosa settled his nerves and then got Kelven Perera to pop out in the infield before striking out Maurice Maiquez to end the inning.

“I come in there and my first pitch I hit the guy to bring a run in and I’m thinking this is not good,” said Sosa. “But I have a lot of confidence out there when I’m on the mound and I managed to settle down after that and protect the lead so it’s all good.”

After retiring the side in order in the sixth, Sosa gave up a one-out infield hit to Julio Baquero in the seventh before walking Leonardo Miranda and suddenly the Gators had the tying runs on base. But, like he did in the fifth, Sosa kept his cool, striking out Christian Miranda for the second out before getting Perera to pop out to second base to end the game.

Despite only getting one hit, Mater Academy batted around in the first inning, plating three runs to jump to a 3-0 lead. After the Gators managed to scrape across a run in the top of the second thanks to a two-out RBI double by Baquero, the Lions dropped another big five-run bomb on Everglades in the second to build that big 8-1 lead.

This time it wasn’t all walks as the Lions had four hits in the inning, the big one coming off the bat of third baseman Eden Nalin (one of those five freshmen) who stepped up with the bases loaded and one out and drilled a shot to the fence in left-center for a 3-RBI bases-clearing triple. Nalin also had a base hit in the fourth inning and finished his big offensive night 2-for-3 at the plate with 4 RBIs, a walk and a run scored.

“I saw the ball well tonight and anything that was close I was going to take a hack at,” said Nalin. “I wanted to be aggressive up there. We needed the offense and really needed this win so I just went right after it. Yeah, we definitely got too comfortable for sure after that big lead and didn’t do a good job of putting them away. I’m sure coach is going to give us an earful on that in a few minutes so hopefully that was a lesson learned.” 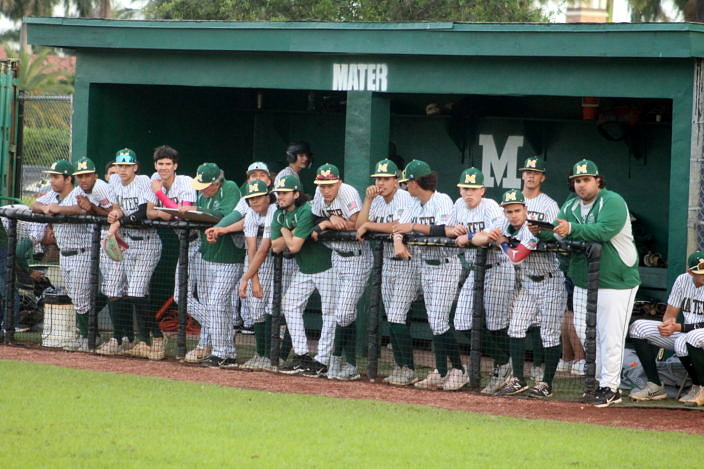 Despite the loss, Everglades manager David Monge was pleased that his kids showed plenty of fight in battling back after things went so sour early on and that a team that only won six games all of last season has already matched that win total this season as the Gators are 6-4 after the loss.

“If we could only have those first two innings back,” quipped Monge. “We’ve got a young team and a young pitching staff and unfortunately our first two pitchers just couldn’t find the strike zone. But I’m proud of our kids because being down 8-1 after two innings, a lot of teams might throw in the towel. But we fought hard, came all the way back and almost got it done in that last inning. We battled all the way and a 6-4 start is nice because we have a young team and feel like we’re going to win a lot more games this season.” 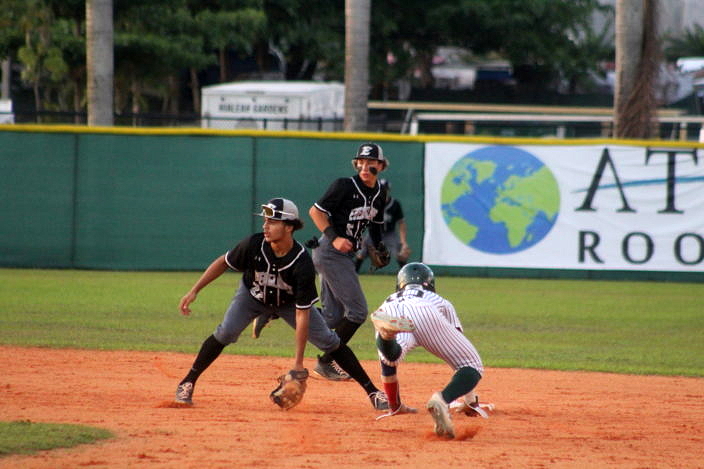