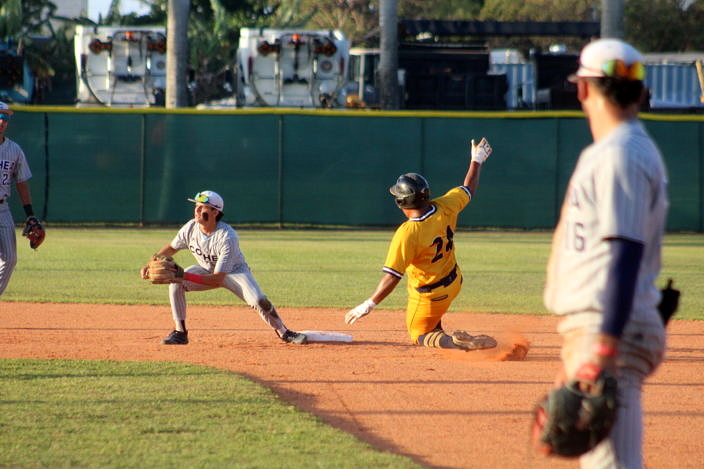 To say it was a big three days for Nathaniel Gomez might be an understatement.

Gomez was the offensive catalyst for the COHEA (City of Hialeah Educational Academy) Bulldogs on Wednesday night as he went three-for-three at the plate with a double and three RBIs to lead his team to a big 14-3 victory over Keys Gate Charter in the championship game of the Inaugural Spring Break Charter School Baseball Classic at Westland Gardens Park in Hialeah Gardens which served as the host venue for the tournament all week.

But not only was Gomez perfect from the plate on this night, he actually finished 9-for-9 in his team’s three games over the three days. Thus when Wednesday night’s title game was over, an MVP for the tournament was announced and Gomez’s selection for the award was a “no-brainer.”

“What a really cool tournament and what an honor to be named the very first MVP of the tournament,” said Gomez, a senior who came into the game hitting an eye-popping .606 at the plate. “It was just a great few days and I’m really seeing the ball well right now and we’ve really got things going stringing these wins together now we just want to keep everything going in this direction.”

After a rough start to the season, Wednesday’s win marked the fourth straight win for the Bulldogs who defeated iMater Academy on Monday and Doctor’s Charter on Tuesday to make it to the championship game and evened their record at 6-6-1.

Gomez had a base hit and scored a run as COHEA jumped all over Keys Gate starter Hector Hernandez with three runs in the bottom of the first and then added three more in the third, which included Gomez’s double, to build a 6-0 lead.

The Knights (9-4), who were playing their second game of the day after defeating Mater Academy 9-4 in a semifinal “play-in” game after the two teams both finished 2-0 in the tournament and tied their tiebreaker (runs allowed with two each) in order to determine who would play in the title game, briefly got back in it by plating three runs in the top of the fourth to slice their deficit in half at 6-3.

An RBI double for Jorge Leon and RBI single by Ariel Rosario highlighted the inning. 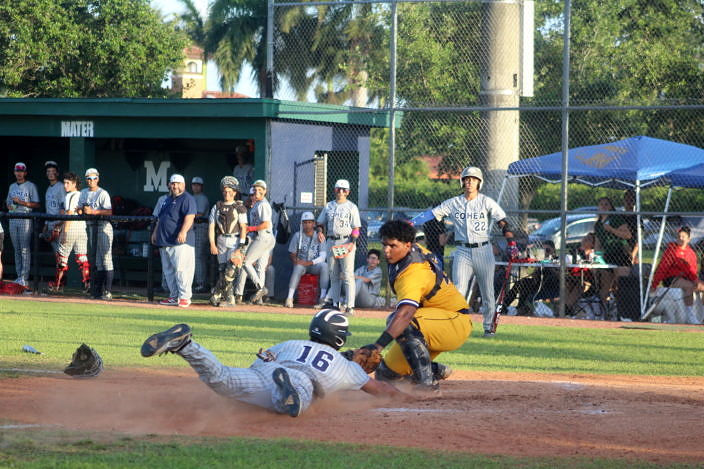 But COHEA was unfazed by the Keys Gate rally. The Bulldogs then proceeded to step up and send 12 batters to the plate in the bottom of the inning and when the dust had cleared, they had scored eight times. Brandon Rodriguez, Dario Castillo, Jonathan Cordero, Luciano Blanco and Gomez all had hits in the inning, Gomez’s base hit bringing in two runs.

COHEA starter Sebastian Grenobles went the distance and recorded the final three outs in the top of the fifth as the game ended on the 10-run mercy rule.

When the game was over, Mater Academy head coach Humberto Bencomo (MA served as the host school for the tournament) got both teams together and handed out the hardware, the runnerup trophy to Keys Gate and a big gold cup to the Bulldog players who posed for a team photo before Gomez received his award for being the MVP.

“Nathaniel (Gomez) was just tremendous all three days,” said COHEA manager Laz Fundora. “The kid is flat out a great hitter, more or less like a professional hitter. He lays off bad pitches and sees the ball really well. As far as tonight was concerned, we’ve been giving up some big leads this year and started to do it again. Our kids have a tendency to drop their heads when that happens but we came right back in the bottom of that inning and put them away which is what we need to learn how to do.”

The tournament was the first of its kind and involved six teams, Mater Academy, iMater Academy, Doctor’s Charter and Somerset Academy Charter being the others. Bencomo mentioned after the game that they anticipate growing the tournament to 12 teams next year.

“We all picked up the phone and reached out to each other and we all loved the idea from the moment we started talking about it,” said Fundora. “At the first meeting we were all on board immediately. Something like this is huge for the charter schools and we want to see it continue to grow.”

For the Keys Gate players, it was a tough ending to a long day. They arrived at the park at 10:30 a.m. to play their noon play-in game with Mater and then had to hang around all day before finally getting to play in the championship game thus might’ve been a team running on fumes Wednesday night.

“We were a little shorthanded, guys cramping up, a few guys out of town, but cudos to our kids that showed up and really worked hard today,” said Keys Gate manager Rich Benevides. “They’ve been here for three days and worked their tails off. We got to play some good baseball teams and hats off to everybody who put this great tournament together. And hats off to Humberto (Bencomo) because he didn’t have to play this play-in game today and he did. We didn’t want a coin flip to decide who played in the championship game. We were not going to deny that for the kids and wanted to decide it on the field, That’s why we’re out here.”

Mater Academy trailed 2-1 in the last of the sixth and the Lions were down to their last four outs before rallying with four unearned runs with two outs in the sixth to win the third place consolation game over iMater Academy 5-2.

A throwing error at shortstop allowed Alexander Mesa to reach second and he then scored when Dylan Fernandez’s ground ball to third was thrown away allowing Fernandez to go to second. After Fernandez stole third, he scored when Ramly Cordero dropped down a perfect bunt giving Mater a 3-2 lead. Luis Morera then stepped up and blasted a two-RBI triple to left center completing the rally.