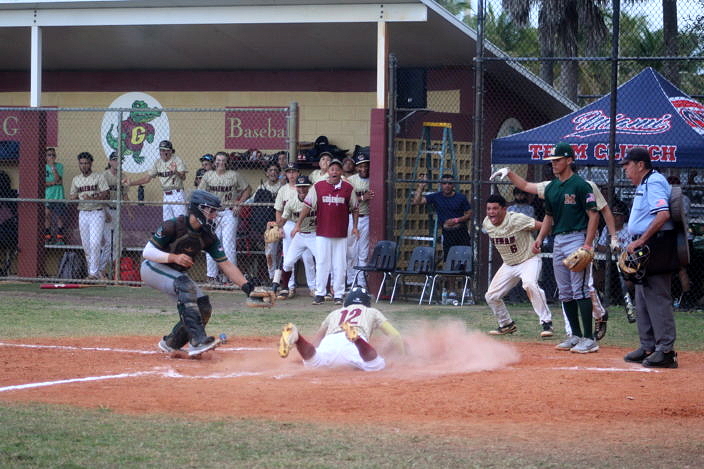 After an outstanding pitching performance on both sides, perhaps it was only appropriate that when things ended at dusk on Wednesday, no winner emerged from the Mater Academy/Goleman matchup at Goleman High School.

Much to the surprise of coaches and players on both sides, when the final out of the seventh inning was recorded and the game locked in a 1-1 tie, they discovered that there would be no extra innings.

Even though it was only 6 p.m. and there was at least another 30 minutes of daylight left, the home plate umpire declared the game over citing safety concerns and darkness.

“I’ve been doing this for awhile and never seen a game be stopped at 6 p.m.,” said Mater Academy manager Humberto Bencomo. “But the umpire made the call and, again, I don’t make that call so there wasn’t much I could do about it.”

Both teams probably felt like they lost the game.

Mater Academy because a terrific pitching performance by senior Diego Garcia got wasted when, after his team scratched a run across for him in the fourth, the Lions were five outs away from a win when the Gators got the game tied. 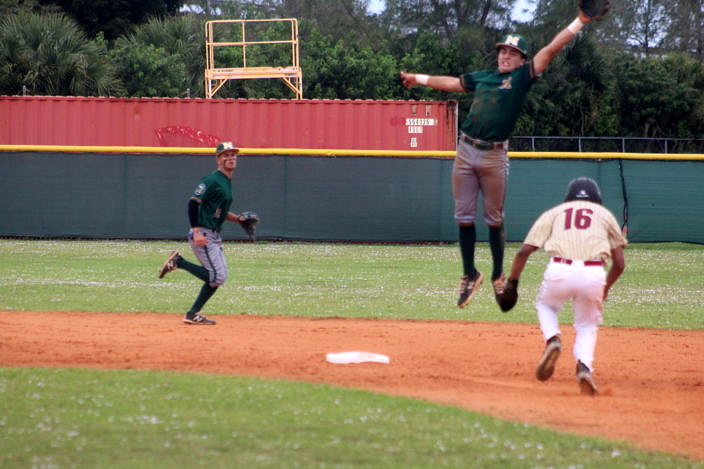 Mater Academy 2nd baseman Luis Morera goes up high for a throw down from the catcher trying to cut down Goleman runner Lucas Mata.

Goleman probably felt like it lost because the Gators, after an equally brilliant pitching performance by their senior number one Chris Perez, had a golden opportunity to win it when Aiden Aguila hit a one-out triple into the right field corner in the last of the seventh and was 90 feet away representing the winning run.

It was only fitting that Perez, the team’s best hitter batting No. 3 in the lineup, was up at the plate with a chance to win the game for himself.

But he chased a high fastball on a 3-2 count from Christopher Sosa (who came in relief for Garcia in the sixth) and struck out for the second out. After Matthew Gomez was intentionally walked, it was up to first baseman Jaden Bologna. But Sosa got him swinging on another high fastball as well to end the inning and, as it turned out, the game.

“I think coach, he just trusted me a lot in that at-bat because during the preseason games and so far this season I’m hitting like .670 something,” said Perez when asked if dropping a bunt that would’ve put the ball on the ground and allowed Rodriguez to score the winning was discussed. “He trusted me and I’m disappointed because I didn’t come through. I just should’ve been a little more patient up there but went and chased a high fast ball.”

Where Perez did not disappoint was on the mound. He pitched all seven innings, struck out six, gave up just three hits and walked only one batter.

But that walk proved to be an expensive one as it was a one-out free pass to Sosa in the fourth. After the second out was recorded, Sosa stole second and then came home when eighth grader Dylan Fernandez got a hard ground ball just past Perez’s glove and up the middle into center field for an RBI single.

Goleman (2-0-1) then finally got to Garcia in the sixth when, with one out, Bologna drew a walk. Pinch runner Michael Mena then reached second on a Yobran Rodriguez base hit to left center before scoring when Larry Rodriguez drilled a shot to left center, tying the game at one and chasing Garcia. Before the rally, Garcia had given up just three hits (two of those bunt singles) and struck out seven.

“I thought about it but Chris has probably been the hottest hitter on the team early in this season so at some point you just have to trust your guy,” said Goleman manager Jose Lopez regarding his thought process of having Perez try and drop one down. “He’s been the type of kid that’s been hitting solid fast balls like he saw and what can you say, it didn’t work out. He chased on a full count and missed the at-bat. It happens.”

While Lopez was disappointed with how Perez’s last plate appearance turned out, he sure wasn’t about how well he pitched on the mound.

“As hot a hitter as Chris has been, he’s been even better on the mound,” said Lopez. “He’s our number one on the mound and proved it again today. He did it last week against iMater and ate up innings there as well. We have a lot of faith in him. We knew coming in to this season he was going to be our number one and he’s proven it so far.” 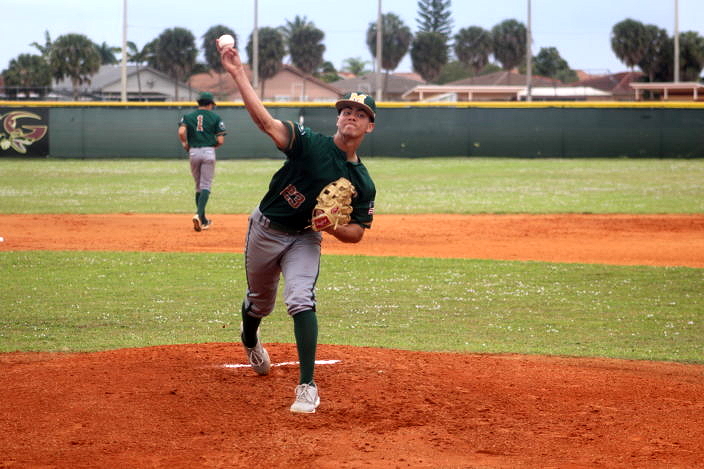 For the Lions (2-2-1), the 2022 season will be a growing and “getting-to-know-you” process as Bencomo has come over after three years at Gulliver Prep. with a plan of putting youth on the field (three starters are freshman and Fernandez is an eighth grader) and “growing them like weeds.”

“We played very well today,” said Bencomo. “Our pitching was good, our defense was good, we had a few runners in scoring position that maybe we didn’t take advantage of with maybe a timely hit but fought and did enough to win the game. It’s my first year here and a lot of kids have transferred back over here so it’s a new group under a new philosophy that I’m trying to put in here. Little by little as games go on I think we’re going to jell better as the kids get used to playing with each other and the chemistry comes together. Discipline will be key. If you have discipline and play the game the way you’re supposed to, things will bounce your way.”