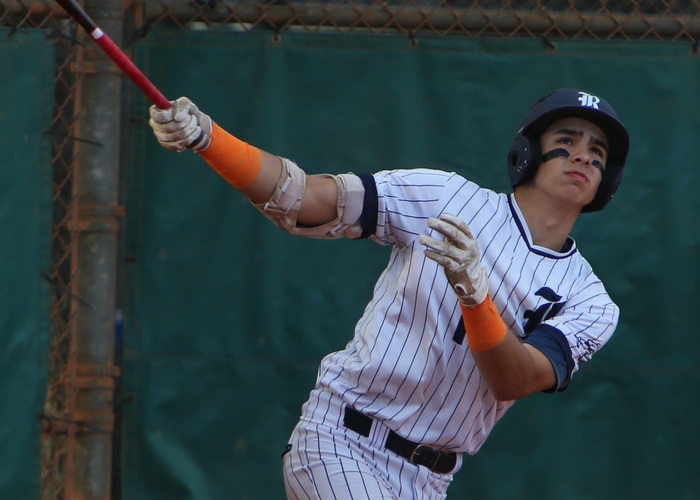 Eric Fernandez clubbed a three-run homer, one of his two hits. He drove in four runs and scored three times in the Bulldogs’ 17-2 win over Westwood Christian on Thursday at Evelyn Greer Park. Photo by Glenn Sattell

Riviera Prep pitcher Noel Leone is going to be counted on heavily this season for the Bulldogs. So are the “Big Three” in the lineup. They all turned in big games on Thursday in a 17-2 win over Westwood Christian at Evelyn Greer Park.

Leone went all four innings of the run-rule victory, striking out seven and walking just one while allowing only three hits as the Bulldogs remained unbeaten at 6-0.

“He threw the ball very well today,” said Riviera Prep manager Emilio Fernandez. “I liked his velocity. I liked the speed he was working at, his composure, he did a good job. We needed that because we need him to be good for us.”

He certainly was on Thursday. Leone gave up just one hit after the first inning.

“I thought my performance was pretty solid,” Leone said. “I could always work on some things but it was a good four innings and I’m very happy about it. The fastball was working good. The two-seam was located and the slider was also very good.”

Two of the three hits off Leone came in the first inning when the Warriors grabbed an early 2-0. Matthew Henao opened the game with a double and Josan Castro belted a two-out, two-run homer.

But it was all Riviera Prep after that. The Warriors’ “Big Three” of Marc Quarrie, Eric Fernandez and Nick Flowers combined for five of Riviera Prep’s 10 hits along with eight runs scored and eight RBIs.

After scoring seven runs in the second inning on just one hit, aided by six walks, two hit batsmen, and an error, Fernandez clubbed a three-run homer in the third inning as the Bulldogs pulled away. 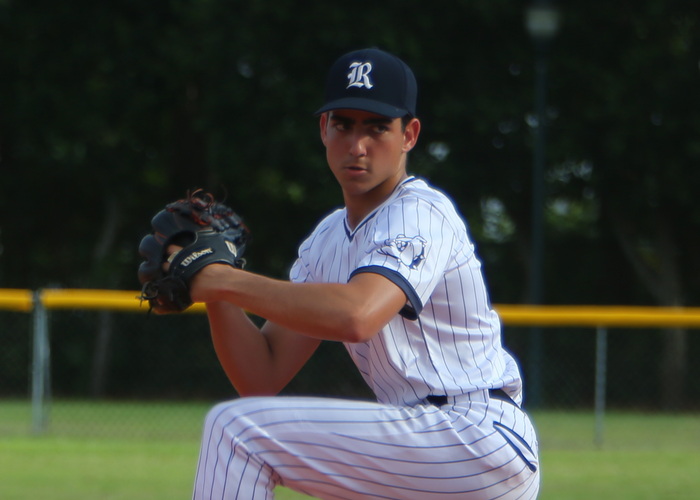 Riviera Prep pitcher Noel Leone struck out seven and gave up just three hits over a four-inning complete game in the Bulldogs’ 17-2 win over Westwood Christian on Thursday at Evelyn Greer Park. Photo by Glenn Sattell

“I was looking for the first pitch that was close and then I saw the pitch, it was right there, and I just jumped on it,” said Fernandez. “Anything close, just take a hack,” added the junior, who committed to the University of Miami in December of 2019, his freshman year. “It’s been a blessing,” he said.

Flowers then went back-to-back with a long solo homer.

“Eric’s (homer) went halfway up the trees and then Nick followed with a back-to-back, that’s kind of what our offense is all about,” said Riviera Prep manager Emilio Fernandez. “And then everybody else chips in. It’s kind of our MO.”

Quarrie doubled twice and reached base on all four plate appearances. He drove in two runs and scored two more. 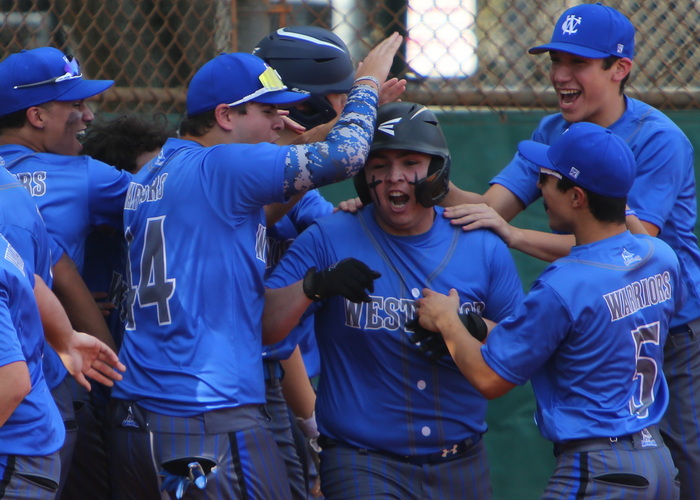 Westwood Christian’s Josan Castro homered in the first inning to give the Warriors an early 2-0 lead on Thursday at Evelyn Greer Park. Photo by Glenn Sattell

Bulldogs lead-off hitter, Frank Avila, did his job as well, reaching base all three times. He stole a base and scored three runs. Ely Halton was also among the key contributors with a single, a stolen base, a run scored and two RBIs.

It was a tough game all around for Westwood Christian, which fell to 1-4, but Warriors’ manager Alex Mejia is already looking ahead to the rematch of 2A District 16 foes later this month at Westwood Christian.

“We play them again and we’re going to show them what we’re made of,” Mejia said. “We’re just going to put this behind us. We’re going to go home and think about what we can do to fix this game.”