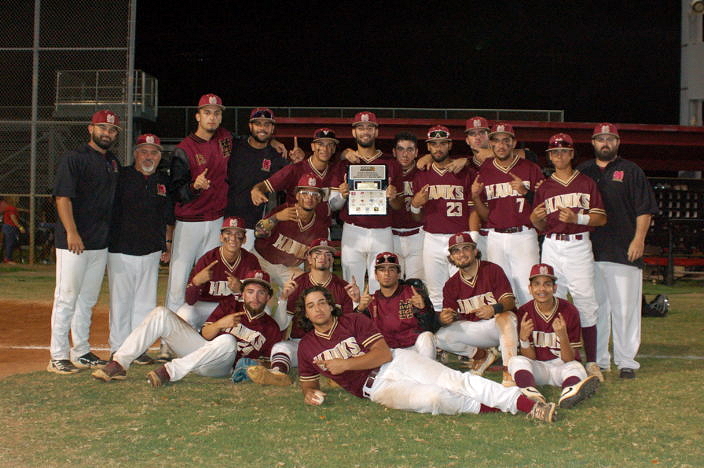 The Miami Springs Golden Hawks (11-1) were crowned champions of the HSBN March Madness Shootout Tournament on Wednesday night after a dominant 17-1 win over the Pompano Beach Golden Tornadoes (7-3).

The Golden Hawks put up over a dozen runs in the first inning and the game was called after just 2 1/2 innings. Pompano needed four pitchers to get out of the opening frame. Troy Lysengen got the start for the Golden Tornadoes but failed to get an out as the first eight batters reached base. Miles Rossoff came in and traded a few more runs for a pair of outs, but he couldn’t get out of the inning. Colin Calvert was unsuccessful as well, and the bleeding finally stopped after Neile Thomas was inserted into the game and got a routine ground ball to second.

“You never really expect to win by so many runs,” Golden Hawks manager David Fanshawe said. “But, our boys came out ready to play today and they’ve been doing well as of late.”

That might be a bit of an understatement from Fanshawe regarding his team’s recent play. Springs cruised through the tournament field, outscoring opponents 55-4 in the four games since Saturday. While they didn’t come into the tournament expecting to win, the Golden Hawks ranked No. 1 in the Miami-Dade HSBN Rankings and had Miami commit Brandon Olivera on the mound.

Olivera was nothing short of brilliant. He struck out six in two innings of scoreless work and allowed just one hit and a walk after a long time in the dugout between innings. Saul Arauz pitched the third, allowing just one run before getting the final out of the ball game.

“(Getting the start) means a lot,” Olivera said. “We’ve got a lot of good guys on the staff. For me to get the start, it just shows that he has a lot of trust in me and that’s why I love playing for this team.” 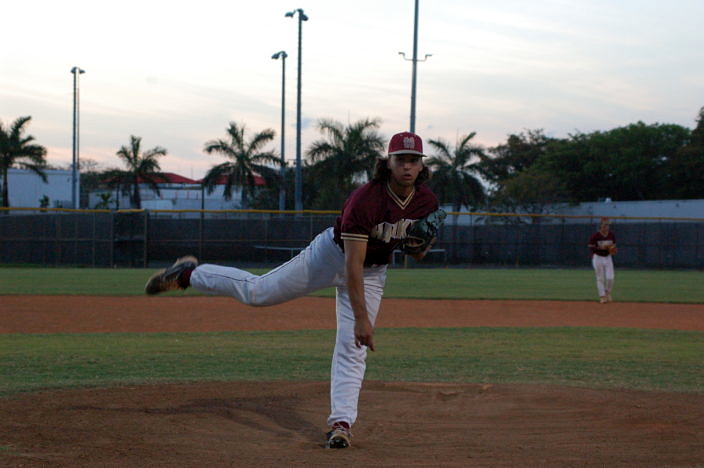 Brandon Olivera gets the start for the Golden Hawks in the championship game.

Whether they knew it or not, Olivera and the Golden Hawks had the mental edge coming into the game. Golden Tornadoes manager Jay Cohen said that his team came into the game in the wrong headspace knowing that they’d be seeing some next-level talent on the mound. Combining that with a lack of pitching depth on the evening spelled disaster for Pompano.

“Our guys read the website and see who’s committed and to where,” Cohen said. “They can get a little intimidated, and it’s not the caliber we’re used to with the way the system is set up. That’s a good team, I’m not going to take anything away from them. It’s just upsetting that we didn’t come out and perform. But if you don’t throw strikes, you’re not going to perform.”

While Springs had their best on the mound, Pompano came into the game with a depleted staff. Cohen admitted after the game that he used most of his pitchers to get to the championship and that options were limited. Things didn’t work out, but there’s plenty to be proud of over the last few days.

“We have a few injuries, but we can’t use that as an excuse,” Cohen said. “Pitching troubles, it’s tough to play four games in five days. We had a couple of guys out of town as well, but that’s not an excuse either. I’m very proud of the way they played all week. This game is not indicative of how they played all week, and how much heart they had all week. We played some quality competition and now they see how far and how close we are to the top.” 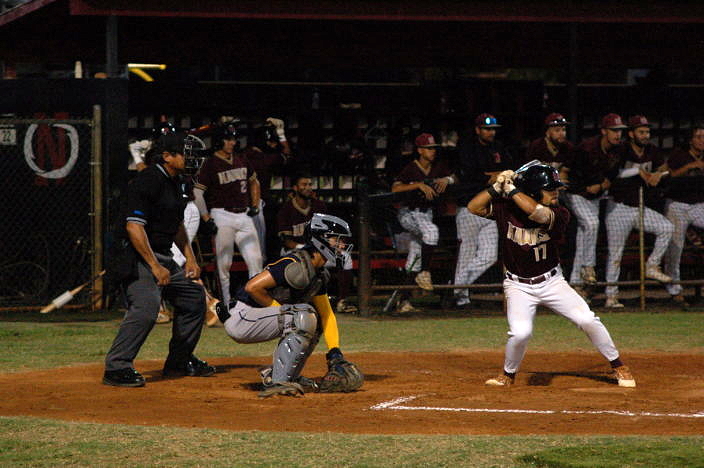 Lead-off man Ruben Gandarilla at the plate for the third time in the first inning.

After the game, Cohen’s message to the team was to have a short memory when it comes to this loss. The Golden Tornadoes have made too much progress as a relatively young group to let one loss derail their season, especially when it’s to a team that’s likely to make it to regionals at a minimum.

Pompano has a more manageable schedule next week with two home games against Piper on Tuesday and Coral Springs Charter on Wednesday.

As for Springs, it will be exciting to see how far this team can go with such a loaded roster. A Friday matchup against Braddock (No. 9 in the Miami-Dade HSBN Rankings) looks like the next big hurdle for the Golden Hawks followed by an April 6 matchup with Miami Springs. That should be enough to get the team into postseason form, and the goal is to go as far as possible.