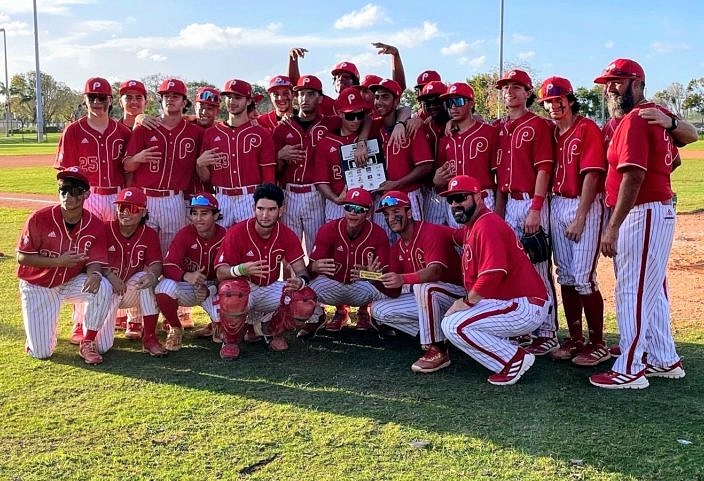 The pitching has gotten it done all season for the Monsignor Pace Spartans, and that theme continued on Friday to lead them to a 5-1 victory over the St. John Paul II Eagles in the championship of the HSBN/Hofball March Madness Classic. Sebastian Valdez and Alan Lamazares combined for 12 strikeouts while holding the Eagles to one run, and Pace (9-1) allowed just six runs in four games during the entire tournament.

The Spartans have won seven straight, and are 6-1 this season in tournament action.

Valdez set the tone on the mound in making the start in the title game, and he earned the victory with four quality innings. The left-hander allowed one earned run on three hits and three walks, and he struck out eight.

Lamazares notched the save by taking over in the fifth and closing out the final three innings. The sophomore right-hander delivered three shutout frames, scattering three hits while striking out four.

The Spartan offense backed their starter with two runs in the first, and then supported the closer with three more runs in the bottom of the fifth. Jacob Poletto got it started with a lead-off double with Pace’s first swing sin the bottom of the first. Rickey Rivas followed with a bunt single, and Dominguez got his club on the board with an RBI fielder’s choice ground out. Angelo Prieto drove home Dominguez with an RBI single to make it 2-0, and he also plated the final two runs of the contest when he reached on error in the fifth.

Poletto singled and scored on an RBI single from Rivas to get it going in the fifth, as he went 2-for-3 with two runs. Rivas was 2-for-2 with the RBI and run.

The Eagles (5-5) trailed most of the way, but managed to get the offense going to avoid the shutout with a run in the fourth. Ryan Shiflet worked the count full and drew a walk, Logan Cooke pushed him into scoring position on a liner to right, and Tommy Melvin pushed Shiflet across the plate with a fielder’s choice RBI ground out.

Although they fell short of championship gold, St. John Paul II turned its season around in the tournament. After dropping four of its first six contests, the Eagles went 3-1 in The Classic to bring things back to even.