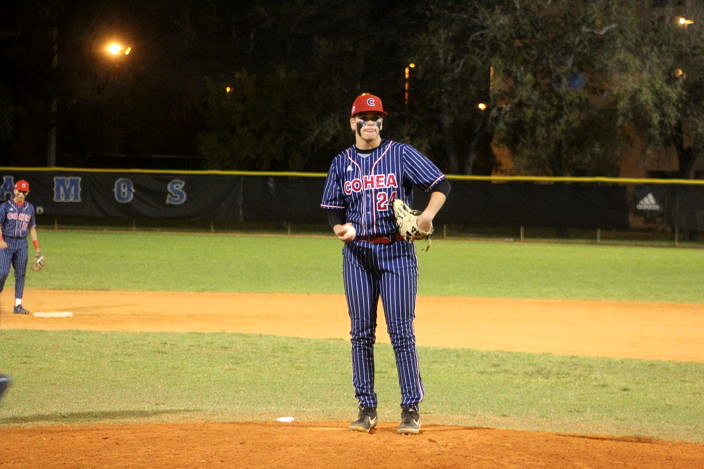 COHEA starting pitcher Randy Balceiro turned in a strong performance on Tuesday night as he went six innings, giving up just three hits while striking out six and not walking a batter to lead his team to victory.

After a 2-0 start to the season followed by five winless games, the COHEA (City of Hialeah Educational Academy) Bulldogs were looking to get back on track on Tuesday night.

And they did so in style. Thanks to a very impressive outing from starting pitcher Randy Balceiro and a 14-hit offensive onslaught that included a pair of home runs, COHEA easily defeated University School 10-2 in their home opener at Jorge Ramos Field in Hialeah.

Getting a win tonight was a really big deal,” said COHEA manager Laz Fundora who saw his team improve to 3-4-1. “When you go multiple games without winning, heads start to drop and it becomes a challenge to keep your players positive and upbeat.”

Fundora is still searching for a true number one pitcher to put out on the mound this season but Balceiro sure made a case for himself on Tuesday as he was nothing short of masterful.

He retired 11 of the first 12 batters he faced and wound up pitching six full innings giving up just three hits while striking out six and not walking a single batter. Tuesday night’s performance came on the heels of another brilliant outing last week as he pitched a complete game against Doral Academy and did not give up a single earned run as the Bulldogs battled the potent Firebirds to a 1-1 tie in a game suspended by darkness.

“I was just out there trying to play my game, throw outside, throw a lot of off speed pitches, try to get them out on the front foot and trying to pass them with the fastball,” said Balceiro. “That’s just my game, I work a lot with outside pitches. It feels great to be helping my team win games and tonight was important, we hadn’t won in awhile and needed to get back in the win column.”

There were plenty of offensive standouts for the Bulldogs on Tuesday night but the clear-cut leader of the pack was Nathaniel Gomez. The senior center fielder set the tone for the night when he stepped up with one on and one out in the first inning and powered a towering drive over the center field fence for a two-run homer.

“My approach was really just to stay within the ball and just drive it gap to gap,” said Gomez of his home run swing and who finished his big night 3-for-3 with two doubles in addition to the homer along with three RBIs and four runs scored. “I got a fast ball up and just stayed with it and caught it with all barrel. It was big to make a statement early. 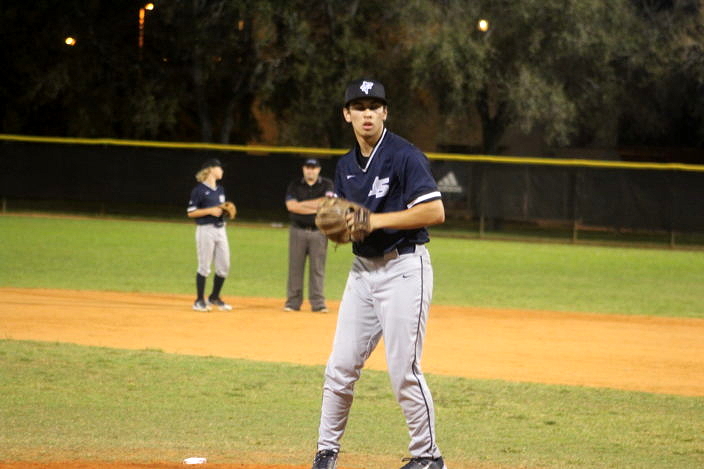 After Daniel Castillo led off the bottom of the third with a base hit to right center, Gomez drew a walk and both eventually scored on RBI singles from Rodney Rodriguez and Kenneth Martinez, staking Balceiro to a 4-0 lead.

Balceiro ran into his only speed bump in the fourth when, with two outs and having retired 11 of those first 12 batters, University’s No. 3 hitter Connor Chang turned on a fast ball and drove it deep over the right field fence to make it 4-1.

Nelson Rosa followed with an infield single and advanced to second on a balk. When Balceiro induced a high pop fly in the infield off the bat of Michael Schettino, it appeared he would get out of the inning just giving up the one run. But the ball was dropped at third base allowing Rosa to score and suddenly it was a 4-2 game.

But leadoff hitter Brandyn Rodriguez quickly turned the momentum back the other way when he led off the bottom of the fourth with a long drive over the left field fence for a solo home run and 5-2 lead. One out later, Gomez doubled down the right field line and scored one out after that on a Kenneth Martinez base hit to left.

COHEA then slam dunked the game by plating four more runs in the sixth, an RBI double by Gomez down the left field line highlighting the inning. Jesus Ramos spelled Balciero and finished up the last inning retiring the side in order.

Bulldog players also played the game with heavy hearts. With the initials IJY stitched into their caps, they dedicated Tuesday night’s game, and this entire season to their fallen teacher Jennifer Yunes, who tragically passed away from COVID last September at the age of 40. Her daughter Isis, who is a student at the school and who the “I” represents on the caps, threw out the ceremonial first pitch.

“We were all close to her and it was a tough loss,” said Gomez. “We dedicated this game for her tonight and we’re dedicating the season to her memory.” 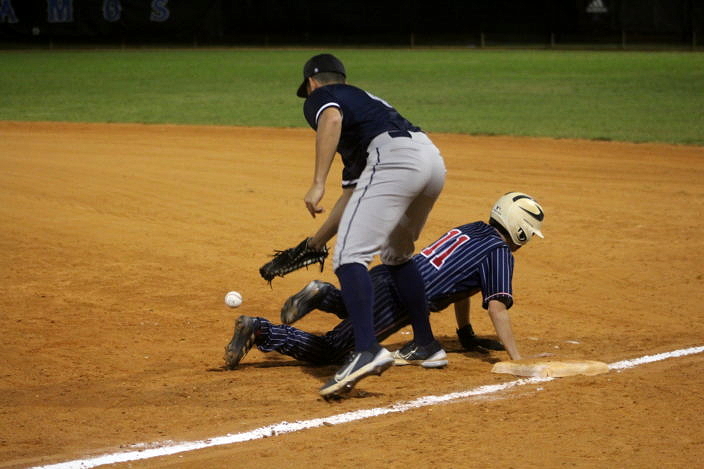 For the Sharks, Tuesday night was another learning lesson. After not even fielding a team for nearly all of the last two seasons (University suspended all sports for the 2020/21 calendar school year), new head coach Dan Rovetto is starting virtually from scratch as six of his nine starters on the field Tuesday night were freshmen. Despite all of that, the team is still 3-3 through its first six games.

“I thought we were pretty competitive early on and it just got away from us a little bit at the end,” said Rovetto who was the school’s coach from 2014-16 before leaving to become an MLB scout for the Seattle Mariners organization. “It’s all about growing pains. We had all of those freshmen on the field tonight playing against a team that was in the regional finals last year so I only think this is positive for the future. These kids are getting the opportunity to get experience which is only going to create value for us down the road.”

Asked about how much patience it was going to take to try and steer this program in the right direction, Rovetto could only grin.

“ Patience is a virtue, especially right now,” he said with a chuckle. “We’re going to make some mistakes that young kids make and I’m just hoping to play our best baseball in April. That’s really our goal that we’re building towards. I said at the HSBN Media Day interview last month that we might get punched in the chin early on, but it’s about how we pick ourselves up and fight through the adversity.”