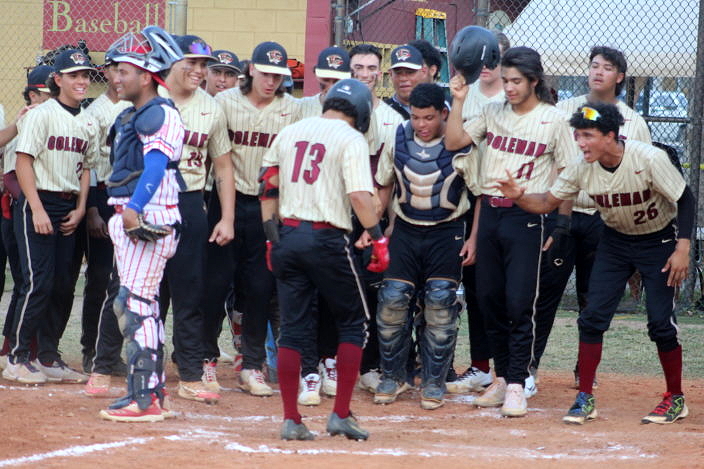 Derrick Corona is greeted at the plate by his happy Goleman teammates following his 3-run homer in the fifth inning.

Despite a nice record, the 2022 season has been a struggle for the Goleman Gators when it comes to offensive output – a team relying heavily on great pitching and defense to scratch out wins.

So it must have been a nice sight to see for Goleman manager Jose Lopez on Wednesday afternoon when his players, once again struggling early on offensively, unleash an 11-run onslaught over the fourth, fifth and sixth innings to easily defeat Champagnat Catholic 11-1 at Goleman High School. The game ended in the last of the sixth on the 10-run rule when Yobran Rodriguez singled in two runs to complete a five run inning.

Ranked No. 8 in HSBN’s Miami-Dade County Power Rankings at the start of the week, the Gators were looking to bounce back from a lopsided loss to Columbus 24 hours earlier and did so emphatically to improve to 11-4-1 on the season.

“It was nice to see the bats come alive,” said Lopez whose team came into the game with a team batting average of under .300 but a pitching staff with a combined ERA of 2.35. “It took awhile today because their lefty gave us some problems the first time around but then when we came back around, we adjusted and were able to put up some runs which hasn’t been the case this year very often. Hopefully this will give our pitchers and defense more confidence going forward.”

The lefty Lopez referred to was Champagnat starting pitcher Ariel Rivera. One of four starting freshmen in the Lions infield, Rivera shut down the Gators for the first three innings and nursed a 1-0 lead going to the bottom of the fourth. That thanks to a clutch two-out RBI single by Champy’s Edinson Cantillo in the second inning to put the Lions in front.

Then came the big fourth inning for the Gators who finally busted out offensively, scoring five runs and all of them after there were two outs. 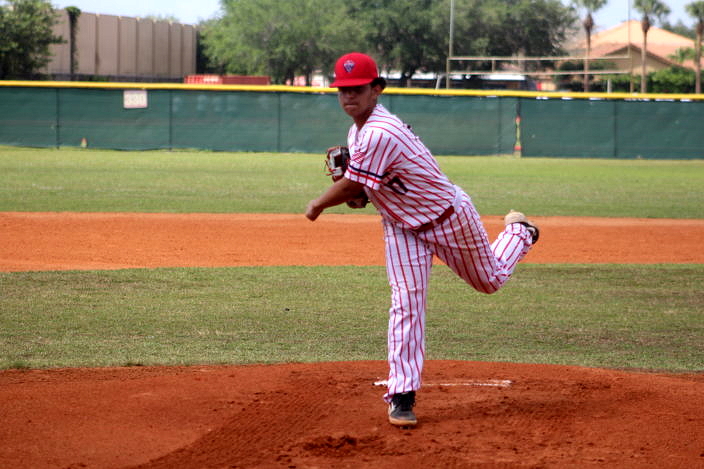 After Nando Mieses led off the inning with a base hit, Rivera then recorded the next two outs and looked like he would take his one-run lead to the fifth, especially when Larry Rodriguez hit a slow grounder to shortstop that should’ve been the last out of the inning.

But the shortstop couldn’t handle the ball and everyone was safe. Jaden Bologna then stepped up and hit a driving shot all the way to the center field fence for a double, scoring both runners to put the Gators up 2-1. After Gio Dalman walked, leadoff hitter Derrick Corona stepped up to the plate and drilled a 2-2 fastball high over the fence in left-center for a three-run homer and a 5-1 lead.

“I was just sitting back looking for something down the middle that I could drive the ball,” said Corona who finished his day 2-for-4 with 4 RBIs. “He left a high elevated fast ball, I level swinged it, got all barrel on it and away it went. I knew I had gotten it all when it left the bat. Today was nice because our pitchers have been carrying us so it was nice to do our part today. Hitting can be contagious so hopefully this will start getting us going in the right direction where that’s concerned.”

Goleman starter Sair Sanchez took it from there as he finished out the game scattering six hits while striking out five batters. He also worked his way out of a bases loaded, no-out jam in the top of the sixth. With the game still 6-1, the Lions loaded the bases on a walk and base hits by Allan Navarro and Jake Padro and had designs of a big comeback. But Sanchez made a terrific play when Paolo Guerra dropped down a nice bunt, fielding the fall and firing home for the force out. He then struck out Jurrangelo Cijntje and got Cantillo to ground out to second to end the inning.

“I’ve just learned to stay calm and not get nervous in situations like that and was able to work my way out of it,” said Sanchez. “Today I was getting a little nervous after three innings because we were behind but then we had that big inning in the fourth and took the lead. Once we got the lead, that’s all I needed and knew I would be able to close things out.”

Lopez had plenty of bouquets to throw his pitchers way after the game.

“Sair has been clutch for us all season and hasn’t allowed that many runs and thrown against some of the tougher teams we’ve played,” said Lopez. “I’m proud of him, he did a great job today.”

On the flip side, 2022 has been a rough campaign for Champagnat manager Jorge Aguas and his players as the Lions fell to 4-10. But Aguas also took solace in that most of his starting lineup is comprised of ninth and tenth graders and even an eighth grader.

“That was a big play in the fourth inning where our third baseman didn’t call off the shortstop and get to the slow ground ball first but that’s all part of being young and growing and that’s okay,” said Aguas. “I actually like this. I like coaching these kids and seeing what the future is going to bring for them. It’s the same thing that we did last year when we had a young core – the same type of situation where they came in as freshmen and I’m great taking that role, to teach these kids the game of baseball the right way. 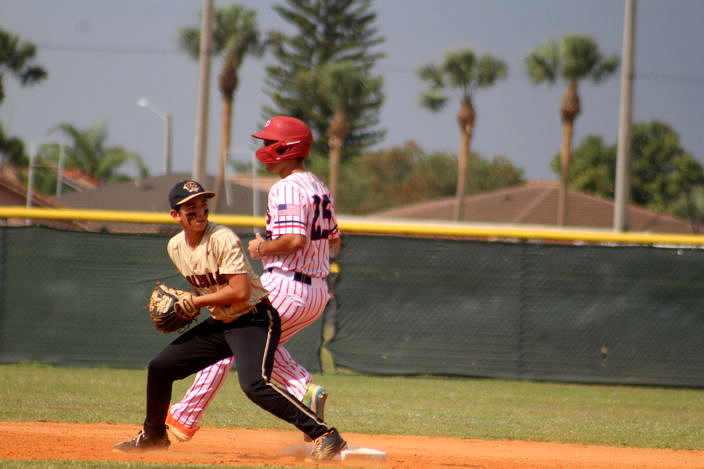 Champagnat also plays a very challenging schedule. As of Wednesday, eight of the team’s 10 losses (including Goleman) had come against teams with a combined record of 85-29-1.

“It’s tough and we don’t shy away from competition,” said Aguas. “If you want to compete and get better, you have to play teams that are good, even if we take our lumps. Those are growing pains, part of the process and you have to trust the process.”