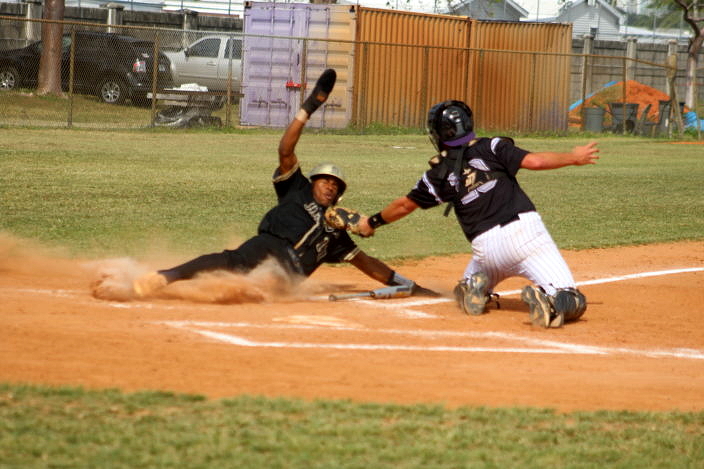 Krop catcher Toufic Khabie reaches to tag Miami High’s Alejandro Perez-Acosta who was out trying to score in the third inning.

Having only won twice in nine attempts, wins have come few and far between so far in the 2022 season for manager Paul Barrios and his Dr. Krop baseball team.

So that made things even sweeter on Thursday afternoon when Krop came from behind to knock off Miami High 6-4 at Krop High School.

Players mobbed starting pitcher Douglas Katz after recording the final out as if they had just won a championship of some kind. That’s what happens when you and are a team working hard to build some kind of momentum.

Krop (3-7) trailed the Stingarees 4-2 in the middle of the fourth before rallying with an unearned run in the fourth, two more in the fifth to take the lead and another insurance run for Katz in the sixth.

“Our kids did a good job of hanging in there today and finally getting some timely hitting,” said Barrios. “We’ve had nice pitching all season but just haven’t been able to score runs and not giving our pitchers the support in the field as well. We still had a few missteps out there but the difference was we came through with some big clutch hits to get Doug the lead and that’s what we need to keep doing.”

Katz, who struggled with his command early on and watched as his teammates struggled in the field trying to adapt to the nearly dozen bunts the Stingarees laid down, eventually settled down retiring the final two batters in the fifth, the side in order in the sixth and the first two batters in the seventh.Alejandro Perez-Acosta kept things alive for Miami High with a two-out base hit in the seventh before Katz got Luis Delgado to pop out to second to end the game.

The clutch hitting Barrios referred to came in the last of the fifth. That’s when, after Miami High starter John Barban retired the first two batters, Zachary Hagerty, Michael Daniels and Toufic Khabie all came through with clutch two-out hits for the Lighting.

Hagerty doubled to right center before Daniels followed with a shot down the right field line that got all the way into the corner for an RBI triple. Khabie then came up and singled right up the middle to score Daniels to make it 5-4 and had the Krop dugout erupting with excitement.

“The mistakes were definitely there in the beginning and things got a little rough but eventually we adjusted to all the bunting they do (Miami High laid down 10 bunts, four of them for hits) and started making some plays, more plays than I thought we would,” said Katz. “Then we got the bats going and it was all good from there. Once they got me the lead, I knew it was up to me to protect it.” 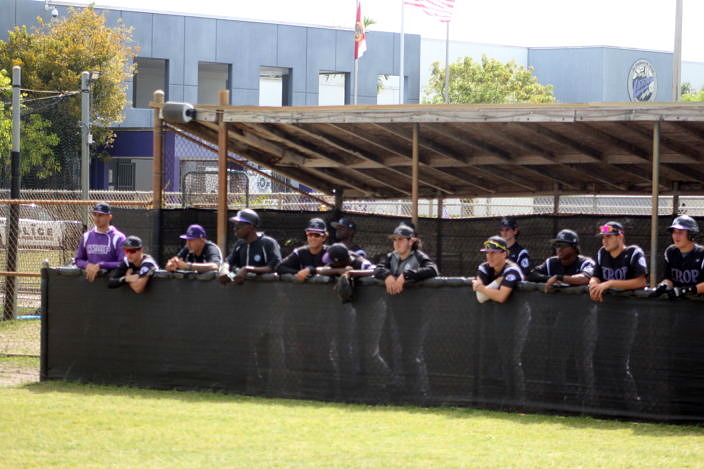 Katz struggled at the start of the game, giving up a single run to MHS in the second and two more in the third to fall behind 3-0 after two-and-a-half innings.

“My command was a little wobbly at times early on today,” said Katz. “But eventually it was a matter of tossing it in there, letting them bunt or make contact, let them run and get them out. It feels great to finally get a win, we haven’t had too many of those this season so hopefully we can get some momentum going.”

Miami High took a 1-0 lead in the second on classic small ball play as Alan Mesa, after a leadoff single to center, eventually came around to score on two more sacrifice bunts. Katz walked two batters in the third with an Alejandro Perez-Acosta bunt single sandwiched in between to load the bases. Eventually the Stings plated two more runs thanks to more small-ball style offense (an RBI groundout and another bunt) to build the 3-0 lead.

An error at third base allowed Krop’s Shane Sims to reach first to lead off the third which got a two-run rally going for the Lightning which sliced the MHS lead to 3-2. Shortstop Maximo Medina scored Sims with a double down into the left field corner before, after stealing third, scored himself on a sacrifice fly to center by Hagerty.

“Today was a huge momentum shift for us,” said Lightning outfielder Santiago Ramirez who went 2-for-3 at the plate and scored two runs. “I felt like if we could get our bats going today, that we’ll be able to get them going every game – lights out. That’s the way we have to approach things. We’ve had the pitching all season and if our pitchers keep doing their job, we’re going to keep winning games.”

The Krop victory also prevented Miami High head coach Edwin Bonilla from winning locking up his 100th career win. Bonilla began his career 10 years ago at Alonzo Mourning where he coached until 2017 before coming over to MHS.

“That’s my buddy over there,” said Barrios pointing to the Miami High postgame huddle. “Edwin and I are like brothers, but today I wanted to keep him at 99 (laughing). He can get number 100 another day.” 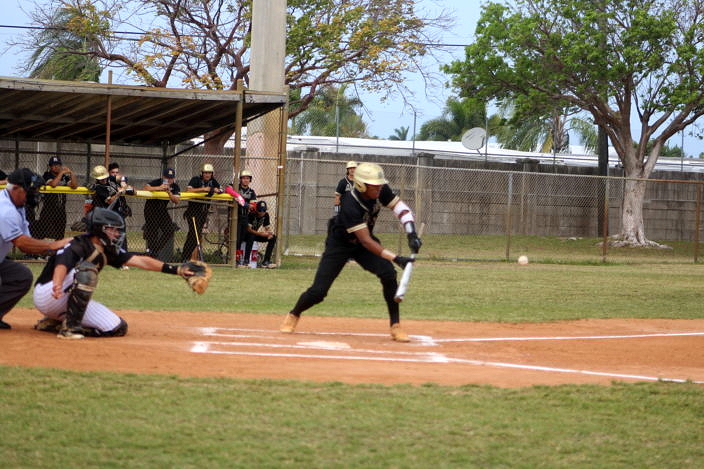 The theme of the day for Miami High was bunts and Alejandro Perez-Acosta dropped down one here to lead the game off with a hit.

“I guess I’m stuck on 99 for a little longer,” quipped Bonilla afterwards. “Krop’s a good team and Paul is a great guy and we knew it would be a tough game today but we just felt like we kind of gave things away down the stretch. We had a really big error in the fourth that allowed them to get an unearned run and get back in the game.”

Bonilla indicated that 2022 has been an up and down season for his team, which fell to 4-10-1 on the season following the loss.

“It’s been a real roller coaster season,” said Bonilla. “We’ve had leads in other games, like Hialeah Gardens, and not been able to close things out. We have a lot of young guys in there that have to learn how to close these games out. Hopefully down the road, they learn from these mistakes and build a pathway for the incoming guys coming in that will lead us in the right direction.”