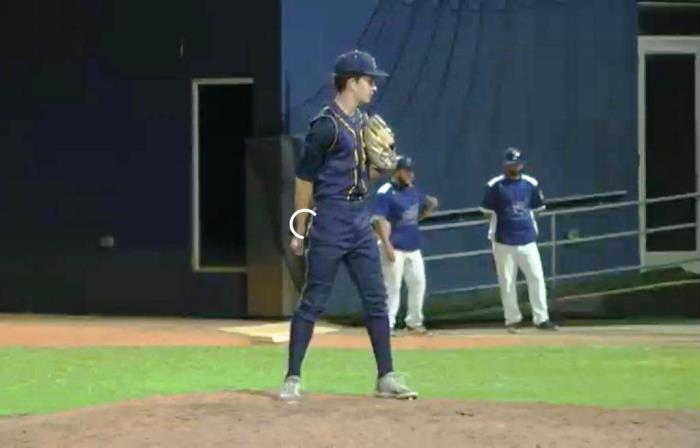 It has been an up and down season so far for the Belen Jesuit Wolverines. After starting the season 4-4, the Wolverines have been playing better as of late.

On Thursday night, led by junior Frank Fernandez, Belen put together perhaps their best game of the season, a 6-0 win over SLAM.

“It was definitely our most complete game of the year,” said manager Jerry Albert. “Top to bottom everyone in the lineup contributed to the offense this evening.”

While the offense put up six runs, it was Fernandez who was the start of the show. The right-hander threw only 74 pitches in a complete game, no-hitter. Only an error kept Fernandez from a perfect game, as he struck out five and did not walk a batter.

“Frankie was absolutely masterful,” said Albert. “He didn’t walk anybody, but what was really great was that he made them hit hit the pitches he wanted them to hit.”

While Fernandez was doing his thing on the mound, the Belen offense gave him an early cushion. A one-out walk in the first to Brandon DeGoti was followed by a Nick Alonso triple to right. A fielder’s choice off the bat of Chris Bayo made the score 2-0.

In the third, it was Bayo again, singling in Alonso, who had reached on a base hit of his own. Bayo finished the game 1-for-3, with a run and two RBIs. Alonso had two hits, two runs, and an RBI.

The third run in the game signaled the end of the day for SLAM starter Christopher Blanco, who ended his outing with two strikeouts.

Hector Escobar relieved Blanco, and was cruising through the middle innings until the Wolverines offense struck again in the fifth.

Bayo walked to lead off the inning. Ernie Echevarria then singled, and a bunt base hit by Jordan Cordero loaded the bases with nobody out.

Mike Cruz extended the lead to 4-0 with a single to right field. A fielder’s choice RBI by Raul Aspuru, and a Chris Mas single closed the scoring for the day. It gave Fernandez a 6-0 lead, and more than enough than he would need on this night.

The junior would close out the game with a perfect sixth and seventh inning, securing the win for Belen.

“He never gave in tonight,” said Albert. “He had all three of his pitches working very well, and he was very precise with his control.”

The win was the Wolverines sixth in their last eight games, and their last three wins have been against teams with a .500 record or better.

The next week will go a long way towards showing how far Belen has come, as they face the HSBN state #1 Miami Springs Monday, and longtime regional rival Pembroke Pines Charter Wednesday.

For SLAM, despit the hiccup, they will continue to build on their impressive 10-4 record when they head home to Doctors Charter, LaSalle, and Palmetto next week.