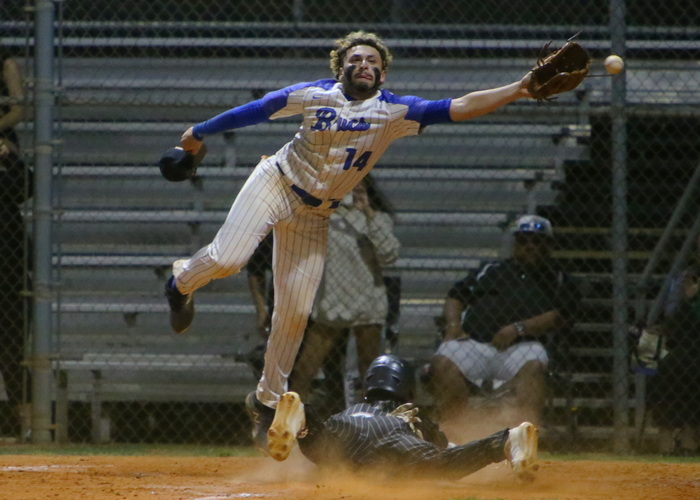 Ferguson scores one of three runs in the eighth inning, but it wasn’t enough on Monday night because hosts South Dade earned a 6-5 win. Photo by Glenn Sattell

South Dade refused to lose on its home field Monday night, outlasting Ferguson 6-5 in 12 innings. But the way in which the Buccaneers won it was the most impressive part.

Down 2-1 in the bottom of the seventh inning of a fast-paced pitcher’s duel, the Bucs tied it and sent the game to a near 3-hour marathon. The Bucs rallied in the seventh, then made a miraculous comeback again in eighth to duplicate Ferguson’s three-run top half of the inning to even things once more at 5-5, before winning it in somewhat controversial manner in the bottom of the 12th.

That’s when Robert Lastra drew a one-out walk, stole second, and went to third on a fly out. Ferguson attempted to appeal the play at second base, claiming that Lastra left the bag too early. However, the Falcons failed to call timeout and when the throw to second base got away, Lastra raced home with the winning run.

It was a wild finish, one in which the Bucs have been on the opposite end of this season. Manager Fred Burnside was somewhat relieved that fortunes turned in his team’s favor this time.

“We’ve had some tough breaks, Baseball God shined on us tonight,” said Burnside, whose Bucs improved to 7-9-1 with the lone tie coming against Ferguson (4-4) in early March.

It was as tough loss for Ferguson, now 5-10-1. The Falcons held leads of 1-0, 2-1, and 5-2 before South Dade took its only lead of the game, scoring the winning run in the 12th. But Ferguson manager Michael DiRosa was philosophical after the loss.

“That’s baseball,” DiRosa said. “It is what it is. It’s fun to be a part of it. Somebody has to win. But it’s fun to be part of that type of game.”

It wasn’t much fun for either team through the first seven innings because both team’s starting pitchers were outstanding. Ferguson’s Frank Vila twirled seven solid innings, at one point retiring 10 consecutive South Dade batters. 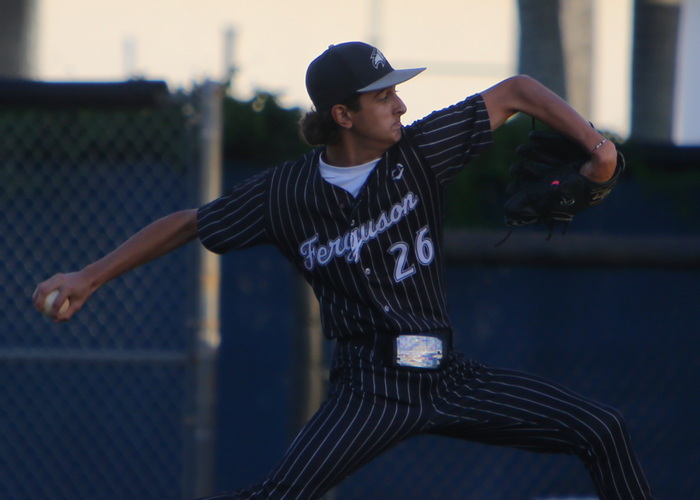 His counterpart, Zachary Cowart, was equally impressive through seven innings, striking out six without issuing a walk. The two runs he allowed were both unearned.

The Bucs tied it, 2-2, in the bottom of the seventh when Ferguson failed to complete what would have been a game-ending double play and Kaleb Borek, who reached on an error, scored to send the game into a wild set of extra innings.

Ferguson appeared to put the game out of reach with a three-run eighth inning to take a 5-2 lead. TJ Jicha started the inning with a single. Juan Conception coaxed a walk, and Aryan Iglesias loaded the bases with a bunt single.

All three came around to score without the benefit of a base hit. Jicha crossed the plate on an RBI ground out from Angel Ruiz. Conception scored on a wild pitch, and Iglesias followed him home on one of six Buccaneers errors. 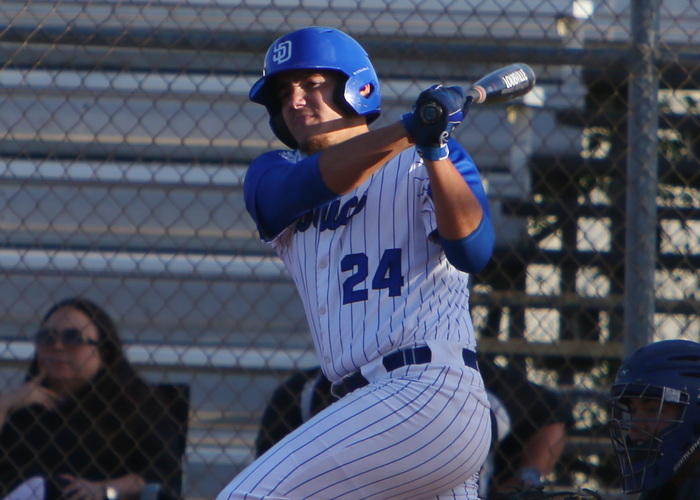 South Dade’s Leiner Andrade takes a swing. But it was on the mound that he was most effective, throwing four no-hit innings in relief to pick up the win on Monday against Ferguson. Photo by Glenn Sattell

Undaunted, South Dade answered in the bottom half of the inning with three runs of its own. The first run scored without the benefit of a base hit. Henry Fernandez was hit by a pitch and Lastra walked. Leiner Andrade and Oskar Amaya were hit by pitches in consecutive at-bats producing the first run. Anthony Cuquejo followed with an RBI single and the Bucs tied it on an error.

Andrade earned the win for South Dade on the mound in relief with a brilliant effort, shutting out Ferguson over the final four innings without allowing a hit. He walked one and struck out one.

He was afforded an outstanding defensive play by third baseman Wilfred Gonzalez, whose contributions were many. In addition to his stellar play at third base, Gonzalez pitched 2/3 of an inning. 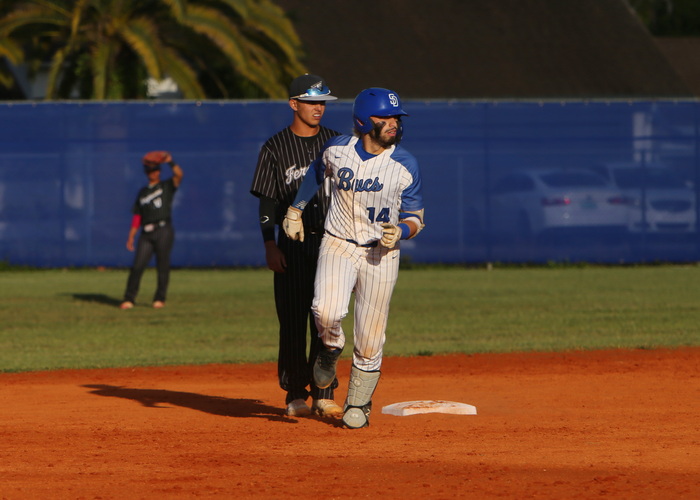 South Dade’s Wilfred Gonzalez rounds the bases after a first-inning solo homer on Monday in the Bucs’ 6-5 win over visiting Ferguson. Photo by Glenn Sattell

“Our coaches put us in the right place,” said Gonzalez, who got the Bucs on the scoreboard in the first inning with a lead-off home run.

His solo blast, which hit the left-field foul pole, tied the game 1-1 after Ferguson jumped in front in the top half of the inning when Laurence Ochoa singled and scored on a pair of Bucs miscues.